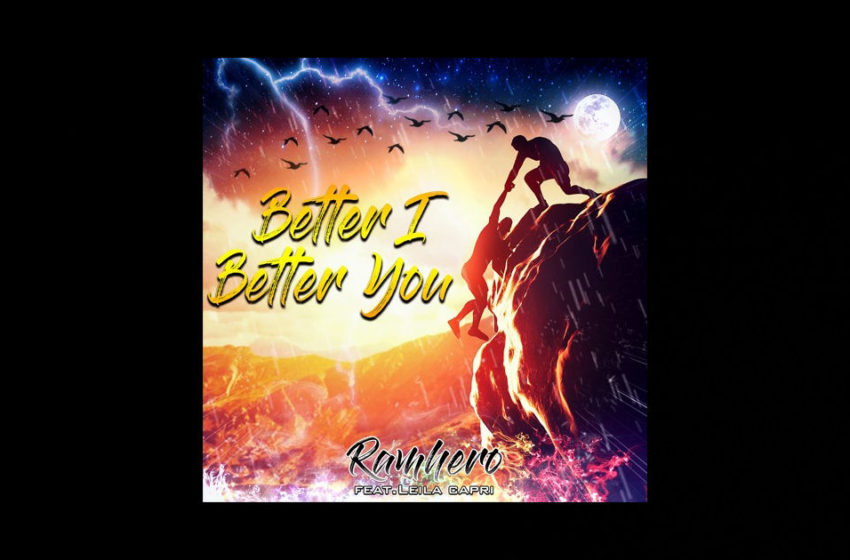 “There’s more to it than just chasin’ up your next cheque.”  True that homie, true that.

Now if we could just all start thinkin’ that way, this planet & its people would be in great shape.  Ready to lead the way by example, artist Ramhero is looking for a “Better I Better You” and a better ‘we’ – you see where he’s going with all this?  That’s what it’s all about y’all…it’s about being a version of ourselves that we can be proud of…one that’s unafraid to make the right decisions and help those in need as best they can – Ramhero gets it; he knows we don’t go through this life alone and that together, we can make this entire journey through the years here something special with kindness, love, and positivity.  Pay close attention to the lyricism…he’s not saying we all have to be perfect, we don’t have to be the best, we don’t have to be the greatest – we just have to be humble and continue moving forward.  So dig that homies…you gotta admire the sentiment in a single like “Better I Better You” and appreciate where Ramhero is coming from…he’s aiming to inspire, uplift, & encourage us to reach that next-level.

I can get behind this.  I like that it’s completely obvious to anyone that would listen that Ramhero has put a lot of heart & thought into his lyricism; he’s got really well-crafted bars that get across what he wants to say in his message while still being true to ‘how’ he’d actually say it all, know what I mean?  His words are organic and they’ve got a natural flow that suits the vibe, his tone is enthusiastic and into the moment, just as you’d hope a track with such a positive set of core messages would contain.  I mean, c’mon, it just wouldn’t work at all otherwise…if you want the people to be interested, the very least you can be is interested and invested in the moment yourself as an artist – and you get that from Ramhero.  He’s focused, writing rhythmic bars that hit the mark for the flow and for the content…there’s no hesitation or awkwardness in the metering, which is impressive considering that Ramhero spits his truth exactly as he’d want to say it all…you’d almost expect a syllable extra or two along the way, but the man keeps his performance tight on the mic and inviting to listen to.  I think he adds that spark of instant appeal as well as “Better I Better You” begins as well…like I said, you can hear that he’s stoked on what’s about to happen in the next minutes of this song from the energy you’ll notice in his tone of voice.

Here’s what I’ll say about the rest of what’s backing him up on “Better I Better You” from the music to the microphone – for the most part, it all adds strengths to the song & to the overall idea.  Leila Capri for example, has a gorgeous voice and she really makes the most of the hooks in the chorus with a really solid effort.  It’s not quite an anti-chorus, but Capri also doesn’t quite rise to that inspired sound of the spark in Ramhero’s vocals…so there is a bit of a noticeable contrast there.  The other aspect I’d advise looking at is the layering of her vocals when it comes time to combining them all together in the hooks; if you separate them in your head individually, you can hear that Capri is right on target for where she wants to be with each separate tone she sings in – but there are moments when they’re all in the mix together that a few of those sweeter notes become more sour than they should be…if that makes sense.  Harmonies can be a tricky thing to master…in the lead-role, I think Capri comes out with tones that serve the song really well…in the background, she’s giving an equal caliber performance, but it’s more masked by the mix there and the slight clashing of a few tones together.  I say slight because that’s the reality here…the hooks are still effective and my personal opinion on Capri’s vocals is still a positive one – I’d just examine closely the effect that the layers of harmonies have verses the desire for the smoothness of sound for a vibe like this.  You want those beautiful R&B vocals that Leila consistently puts on display, and at the same time, you want to keep the entire cohesion of the smooth, rhythmic, & chill sound to carry on as undisturbed or uninterrupted by anything that would potentially take us out of the song as well.  Those moments in the chorus come out right on the fence at the moment right now – but I think for the most part, the inspiring & uplifting sound & sentiment of this song will have people on their side…any adjustments that could be made would be slight tweaks at best; for the most part, “Better I Better You” glides along without interference.  When you listen to the delicate beat & music that comes along with “Better I Better You,” you’ll get what I mean…you want this moment to take you away from your own world for a moment to drift into the dreamy vibes of this single…it’s got a perfectly set hypnotic & mesmerizing sweetness to the entire sound that really creates an atmosphere you just wanna stay lost inside of.  Dig the positivity, dig the sound…it’d be really tough not to support a track assembled this strongly with such inspiring, encouraging, and humble words to go along with it – so instead of trying to resist it, I won’t!  Neither should you.

Be ready for more music coming out by Ramhero – check out his page at Soundcloud here:  https://soundcloud.com/ramiro-castillo-471695226