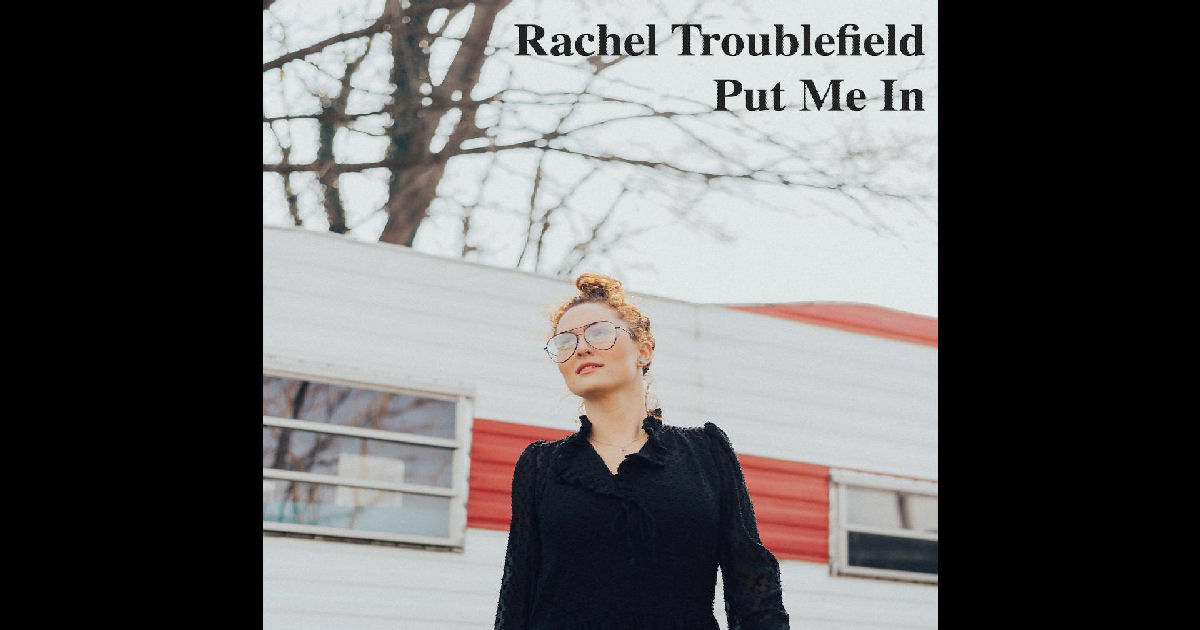 In terms of sheer entertainment, there’s no argument to be had here – Rachel Troublefield puts an incredible performance on the microphone throughout her new single “Put Me In.”  This glossy cut from her new record Come Closer certainly shines as bright as possible at every turn, possessing multiple moments where Rachel is put directly into the spotlight – and she takes every opportunity to rise to the occasion.  No question at all that she’s completely capable of high-energy pop-inspired melodies after hearing “Put Me In” – if she’s been on the bench all this time, you can literally hear that she’s taking this moment for all it’s worth & making the most of every second in a strong bid to go for the majors.

It’s hard to say for sure, but she might already be there.  Let’s just say that I wasn’t exactly surprised to find out Rachel’s based in Nashville right now…that’s something you can definitely hear in every moment of this well-rounded songwriting & ace musicianship that leaves no stone unturned in mining its lyrical metaphors as deep as they can go.  That’s where the decisions are going to come in to play when it comes to Rachel’s future and defining which kind of artist she wants to be; she can clearly thrive in the Nashville songwriter’s circle and create songs like “Put Me In” that mix sports references with emotions & perspective on love/life/relationships – but one might ask, is that how she REALLY feels?  Maybe Rachel thinks in sports analogies & metaphors all the time…I’ll admit, I don’t know her well enough to say one way or the other – but the point is, as an artist, you get that opportunity to go on a quest to create the perfect song, or you let it organically come out naturally; you can hear the craft at work here.  Does that form the powerful connection between the artist & the words that you’re looking for?  For some, it might…and to be fair, even in the lyrics, Rachel will tell you she’ll ‘say so many things that’ll leave you scratching your head’ – so maybe this metaphor for getting in the game of life & seizing the day on “Put Me In” could work for the people…there’s certainly no question about how catchy it is or just how much the hooks of this single-worthy tune WILL stick in your head.  Do I like it?  Sure!  How could you not?  I can’t lie to ya folks – designer songs like “Put Me In” are guaranteed to succeed.

But here’s where you’ll find me fighting on behalf of the artist, as always.  Because you’ve all heard my Nashville-based rants enough already I’m sure, I’ve been calling out that music mecca for years for the potential damage it’s causing in relation to the success it creates.  WHY Rachel WILL succeed…it isn’t because she’s moving the chains so far lyrically that she can safely run to the end zone…not yet…I want more of a connection…one I know she’s capable of – the artist that you can hear in the surrounding parts around the words of this song.  The moments without actual words featuring Rachel’s natural voice & expressions leading the hook speak almost louder than any lyric that’s been written here – THAT is where the magic of this song resides.  The best part about that?  You can’t Nashville that.  You can’t gloss a spot like that over enough to drown out the artistic & beautiful qualities in Rachel’s voice that’ll make her a complete stand-out to a ton of listeners out there.  As a performer, as a vocalist, she’s absolutely nailing every moment of this song with blissful, inspiring, empowering & uplifting confidence – so don’t get me wrong, Rachel sings the heck out of this song and maximizes every single moment you hear her voice.  BUT…that magic of just hearing her sing without having to focus on the imagery or lyrics is more than enticing…it’s a seriously strong hook that shines a spotlight on the most organic part of her natural skillset – and you get that dose of the humble artist that can sincerely connect every bit as much as she can thrill, energize, and entertain through flashy hooks.  The potential in Rachel is incredible.

And I have zero doubt that she’ll score a decent hit out there with the people on “Put Me In” – again, I don’t want ANYONE out there to get me wrong, it’s as well written as a song can possibly be and performed just as strongly.  Do I still think that Rachel has more of a genuine connection to the words to reveal and further depths to reach as an artist?  Sure I do.  Do I think she can get there?  I’m rarely so confident in saying YES like I am now.  As a performer, I think Rachel is completely stunning and I absolutely love the sound of her voice…she commits to this whole song and it’s because of that, that whether or not the sports metaphors & imagery work for you or not, you still want to listen to her sing every word.  At the heart of it all, “Put Me In” shows the stunning craft of tight songwriting at work alongside an entire performance that is equally strong on all fronts.  I love the way you can hear Rachel’s voice & tone change to add in some rasp to give the words some edge when they need it, or how she can dial it all back to reveal the beauty in her most subtle tones, like you’ll find in the breakdown.  So though it might seem like I’m complaining…I’m not…I’m reaching out to Rachel in effort to remind her that it was those incredible instincts that likely brought her to Nashville in the first place…that they can have a piece of her, but not to let them have the whole thing.  Because at the purest parts of “Put Me In” you can truly hear a singer that has the talent & expressive abilities to move hearts & minds – and I think that the more she embraces that uniqueness without worrying about the ‘rules’ of traditional hit songwriting so much or at all, that she’s going to find herself succeeding on multiple levels as an artist.  For now, she can certainly rest assured that she’s got a verifiable hit on “Put Me In” and a song that’s massively accessible to a huge variety of people, playlists, radio-stations, charts, etc. etc. – and at the end of the day, that’s an achievement to be recognized, commended, and of course, turned right up.

Find out more about Rachel Troublefield at her official website:  http://racheltroublefield.com