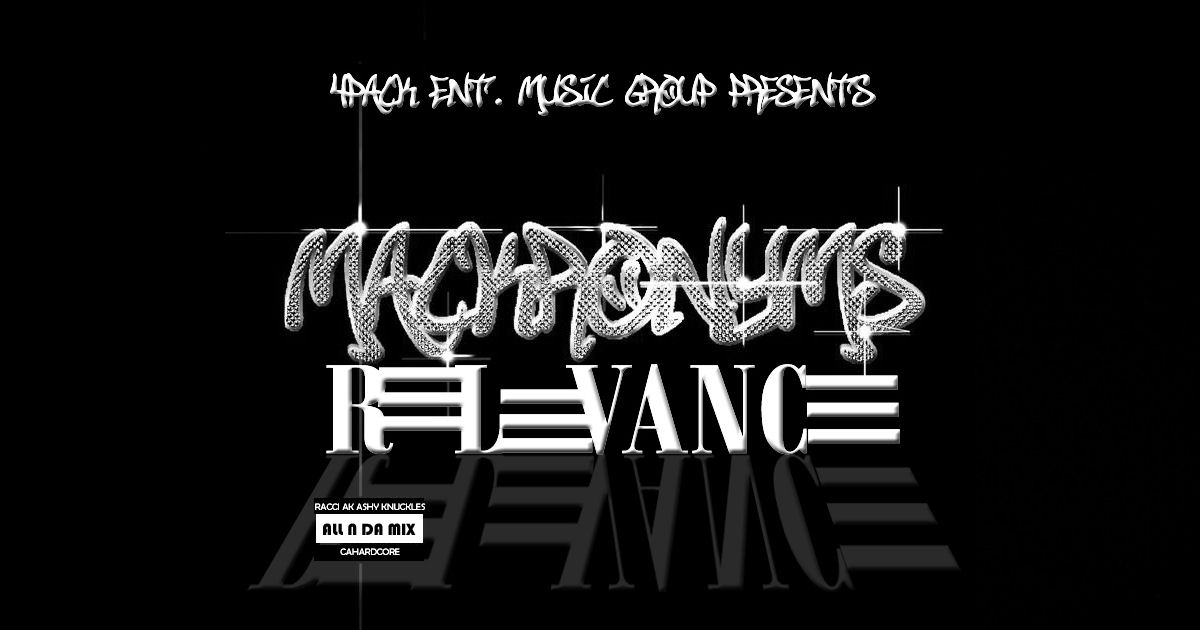 I mean…to some extent, it’s kind of a song about being a song.  So there’s that.

Racci AK is back on our pages with a brand-new joint from his upcoming record, a sample dose, a tiny taste of what’s coming for ya when he drops the MACKronyms – RELEVANCE EP soon enough.  For now, we find this wild entertainer “All N Da Mix” to get an idea of what we can expect in the near future.

I’ll say this to start – it’s night & day different from the last experience we had with Racci AK, aka Ashy Knuckles, back in January of this year with the single “MBMAH” in review here at the pages.  Whereas that cut brought out the smoothness in the sound and the personality of the emcee on the mic, “All N Da Mix” heads in a decidedly different direction to a much more party-inclined & club vibe to groove on.  The kind of difference between experiences where you can quite guarantee everyone ridin’ with him before will come along on this adventure, but such a 180 in sound as well that he’s bound to pick up a whole bunch more fans to fully replace anyone that might have fallen off the bandwagon here.  For the most part, I’m sure he’s on solid ground; as I mentioned earlier today, it’s always tough to get a full picture of what an artist is all about from just a single song – so maybe what we’re hearing on “All N Da Mix” is actually much closer to what Racci AK is normally all about – we still don’t really know.  In any event, the amped-up energy and fun that you’ll find on this new single should be more than enough to get speakers bumpin’ and volume knobs being turned up out there by many enthusiastic listeners – there’s no doubt there’s a market out there for this and the masses always dig another reason to party.

In the sense that it’s somewhat designed as an introduction to the experience of what’s to come on the MACKronyms – RELEVANCE EP, I’m cool with what I’m hearing…it’s enough to get us interested in what’ll come next and ultimately, that’s what’s most important.  Do I hear as much style & identity in the music or vocals of this single compared to the last one we heard?  That’s another story…I’m honestly not sure that we do…there’s a risk in heading towards a more all-access pass sound like this, which potentially could threaten the way he was able to stand out before.  On the bright-side, he compensates by at least announcing who it is on the m-i-c while he’s ‘on the radio’ and “All N Da Mix” – but if it wasn’t for the personality you’ll find in the verses of this cut, it’d be harder to pin this directly to Racci AK if you didn’t know that’s who it was already, feel me?  The chorus is fun, no doubt, but it does have a more generic idea at work…which is good in the sense that it’ll grab people with its energy and hooks & not make them have to think about all the stress in their day, they can just relax and get down while being “All N Da Mix” and not worry about a thang.  And likely, if it was your first experience with Racci AK’s jams then you’d come out with a favorable opinion on this cut for sure – I think it’s only by comparison to what I’ve heard in the past that’s got me looking for that level of identity in the overall sound.  With two cuts being so polar-opposite of each other, it’s honestly hard for me to tell what Racci AK is up to, whether it’s a full-on switch in style, or if this is a one-off, or even if the past cut “MBMAH” was the exception for his sound & not the rule – time will tell when we get to hear that new EP I suppose.

Having said all that, sometimes it’s those comparisons that’ll give you a little more insight into what’s up when there’s that much time in between.  Let’s face facts – although “MBMAH” came out with a smooth & chill sound to it, you could tell the man behind the microphone might not have exactly been in the greatest of moods or mindsets at the time based on the lyrical tale he was spittin.’  On a track like “All N Da Mix,” you can absolutely feel like somehow the course has been corrected in Racci AK’s life somehow – and that things are clearly goin’ well for the man over there, wherever he is.  I mean, I’ll put it to you this way – bad moods & bright synthesizer sounds just aren’t something that go together, so the fact that “All N Da Mix” starts out with such radiant in-your-face sound should tell ya he’s doin’ just fine.  Delivery & flow-wise, I think he does a rad job on the bars in the verses and proves he’s still got the fire, that’s where I’m at personally and where I feel like you get the most from this emcee.  Like listen to the smart way he’s workin’ the call & answer method of laying down the second verse – that’s awesome, dude’s crushin’ it there and has multiple moments where he flexes that finesse we love from Racci AK.  The chorus has solid hooks & energy that’ll appeal to many people out there for sure, I’ve got no doubt about it…like I said, it IS fun at the end of the day, and the fact that you can hear he’s so into this moment in time convinces you to feel the same way.  He keeps it surface-level for all to enjoy in the chorus hooks of “All N Da Mix” and dives deeper into the verses to bring out some of that high-level skill, character, and charisma we know the man is more than capable of.  “All N Da Mix” is designed to be the anthem for that party atmosphere on your Friday nights when you’re out there lightin’ it up – and when looking at this cut from that angle, it’s impossible to deny that Racci AK succeeds again here for sure.

Find out more about Racci AK from his official page at Twitter:  https://twitter.com/4PACKENT