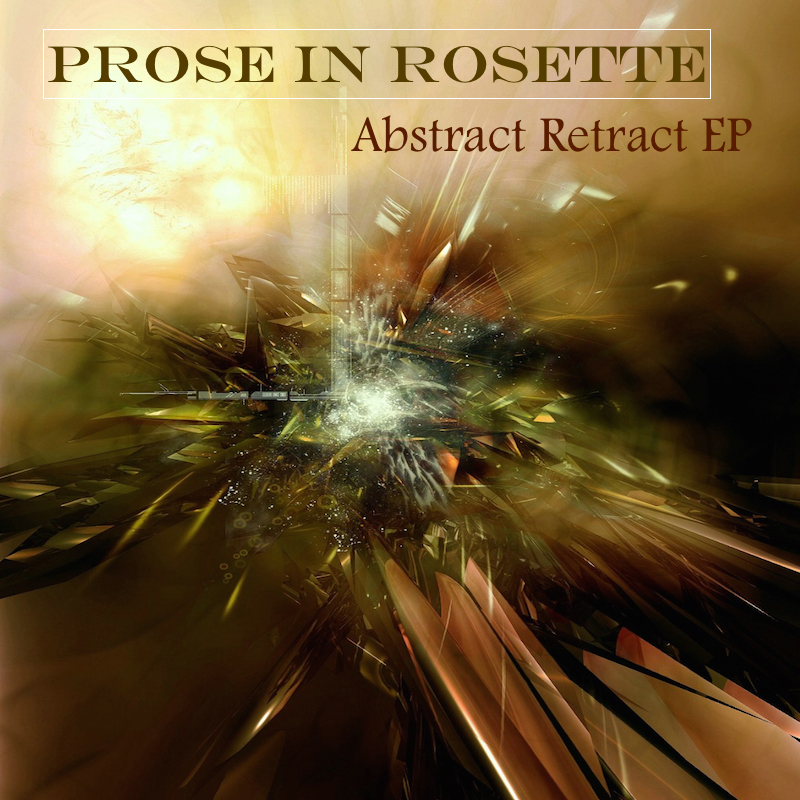 Prose In Rosette is making sweet alternative music with a large indie-vibe running through it. Fans of bands like Sparklehorse or James Iha of The Smashing Pumpkins will get that melodic sound they love with what Douglas Jay Hertel has been coming up with in the East Bay area of CA, USA – dreamy rock returns with Prose In Rosette’s latest EP, Abstract Retract.

For the most part…the music on the EP shows a lot of promise & potential…great ideas show themselves instantly through the opening melody of “Lunatic Lipstick.” Excellent subtle guitar rhythms on muted strings and a faraway drumbeat that still manages to keep this track together from miles away. As far as structure goes, the song is mapped-out well for an opening tune and gradually builds throughout and right through to the end. Vocally there are a few moments of real success in the sense that they match the energy and atmosphere of the song very well; but for some the sound of Hertel may be a difficult one to latch onto firmly. Very much like Iha experienced through his solo-work outside of the Pumpkins, this gentle-approach to the microphone & music can be extremely difficult to pull off for the public.

The breakout of “Lunatic Lipstick” into “Stardust Echo” works fantastically as we switch into a rhythm and melody more akin to the softer moments of bands like Dinosaur Jr. might have made. I love the sound of the guitars from Hertel and almost wished he found a way to bring them out a little more through the mix…at the moment the vocals are the prevalent star of any given track, with the singing up above the music by just enough that you can audibly feel the separation between the two at times rather than the unity or bond you might be looking for. With a polarizing sound – Hertel is taking a little more of a risk here by keeping the vocals above the music rather than sinking them deeper into the mix. Overall…it’d be tough to mix through the vocals and I get that; largely due to the choice of tones, many times Hertel will blend into the guitar & bass melodies like a chameleon, and at others he comes through almost a little too brightly above the music depending on the sound he’s going for.

Personally, I’m a fan of the innocent sound that the pop/indie aspects of Hertel’s voice can bring to a song, but I do think there are still some things to be improved upon as far as the execution is concerned. I also have to be a little careful in this respect…I’m a writer…no one tells me how to write…Hertel himself is far more schooled at the art of music and recording through a vast education than I am by a million miles! But even in listening to “High Step,” a song of which I was privileged enough to be able to do some video-work on…the one thing that consistently stands out to me are the vocals on this EP. If I was wagering a guess…I’d say that this is the kind of vocal-set that was recorded between the early A.M. hours of the night after the clock passes twelve. Main reason I say this is because it sounds like Hertel is making more of a concentrated effort on not becoming too loud than he is on truly letting himself go on the microphone…so I’m thinking he didn’t want to wake the neighbours when he was recording?

Whatever the reason might be…if Hertel himself is wondering why a few of those parts come out sounding more questionable in tone than maybe he’d like…it’s all related to that soft-energy over the microphone being one of the toughest to nail with the actual-energy required to make it happen. It’s a crazy concept to think of…but someone like Michael Bolton would be just as intense recording a slow jam as Michael Jackson would have been in making an up-tempo hook, know what I mean? Without that energy and power behind the vocals…there can be a little suffering in the vocal-tones as a result – Iha audibly has the exact same issues at points in his material and songs.

But…the opposite side of the coin is that Iha obviously doesn’t just have a couple fans – he has millions; so what do I even know? Maybe this is exactly what you’re looking for and Hertel as well!

I think what’s important is that the song-writing and ideas are on full display. What amazes me sometimes is that Hertel didn’t opt to make that music of his a little bigger in Prose In Rosette with some of the awesome parts he’s created for guitar and drums. I love the guitar parts in “High Step” and pretty much everything about the music of “Out Of Pretense” – that’s a killer beat right there. To be fair to Hertel, throughout most of “Out Of Pretense” he has shrunk back into the music a little…and I think that’s also one of the main reasons as to why this track might work a little better for me than some of the rest…I like where he’s sitting in this mix. Aside from a few backup harmonies that declare themselves a little too boldly within this song, I love what he’s done on this track. Excellent additional synth-rhythms fill the space perfectly on this tune.

“Those-unrest” almost takes the vocals too far into the music – good lord I just can’t be satisfied can I? This one is more due to tone selection than mix per-say, Hertel is set deep in low, melodic tones that find themselves a little buried against the low-rhythms of the guitar and bass. A little bit of a struggle on the chorus of this one that is slightly audible…the kind that leads you to believe that Hertel would more than likely feel like he could go back and nail this one slightly tighter now with more experience singing the song. I think the ideas here could work…really dig the way this song moves through its final minute, twists, changes and keeps the interest strong through to the final moments of “Those-unrest.”

“Dear Premier” is a pretty cool track with a creative combination of piano & guitar meeting the quick drumbeats. Interesting how the subtle nature of Hertel’s vocals have made many of these songs almost appear to be ‘slow-songs’ in a sense…but if you listen to any drumbeat, these are all actually moving quite quickly. “Dear Premier” is no exception…on this tune I REALLY wish that piano part was just a little above the rest in this mix…it’s a very strong part that could potentially help lead this track into a brighter sound and more powerful rhythm – in my opinion that’s one thing that Prose In Rosette really could have brought out a lot more here…

The overall timid nature of the music might reflect a little bit of confidence-building still needed in the background. Again, in my opinion – Hertel just needs to break that final wall down, trust his instincts and throw himself right into these excellent ideas that he’s coming up with. Once he does that, truly…songs like “Hallowed Refrain” will come out sounding as the epic-ending it should be. Another creative idea with a lot going on from drums, to guitars, to synths – “Hallowed Refrain” still carries that feeling that Hertel is slightly pulling his punches…and at this point in the EP I find myself really wanting him to hit me full-on.

Potential? For certain. Needs a little sorting out? Yes. Can he get there? I suppose that’s the big question…so let me answer that for you…YES. Everything I’ve read about Hertel and Prose In Rosette has revealed an intense relationship with music – this is a true student of the craft unlike most others. Hertel seems to possess a great desire, want and NEED to communicate through music and he has taken a great many steps to educate himself in the best methods to go about it. Like all great teachers…there’s no harm in admitting they’re still in many ways, students themselves…that whole philosophy I personally subscribe to, of which if I’m not learning anything I might as well be DEAD. Hertel has that same passion for learning, growing and evolving his music, methods and style from what I can see…and I have little to no doubt whatsoever that every time you’ll hear him on a new record will show him improving and outshining his last.

But most importantly…you can tell that there WILL be more music when you read into Hertel’s bio…this is a man that is never going to give up pursuing his dreams with full-force until they look & sound exactly as they do in his own vivid imagination. The perseverance, commitment and dedication he has is completely inspiring to me…and I’m certain it will lead Hertel to exactly where he wants to take the music of Prose In Rosette. With a little more confidence and confirmation that he is indeed onto something – this is an artist with the potential to truly expand and blossom over the course of his career.