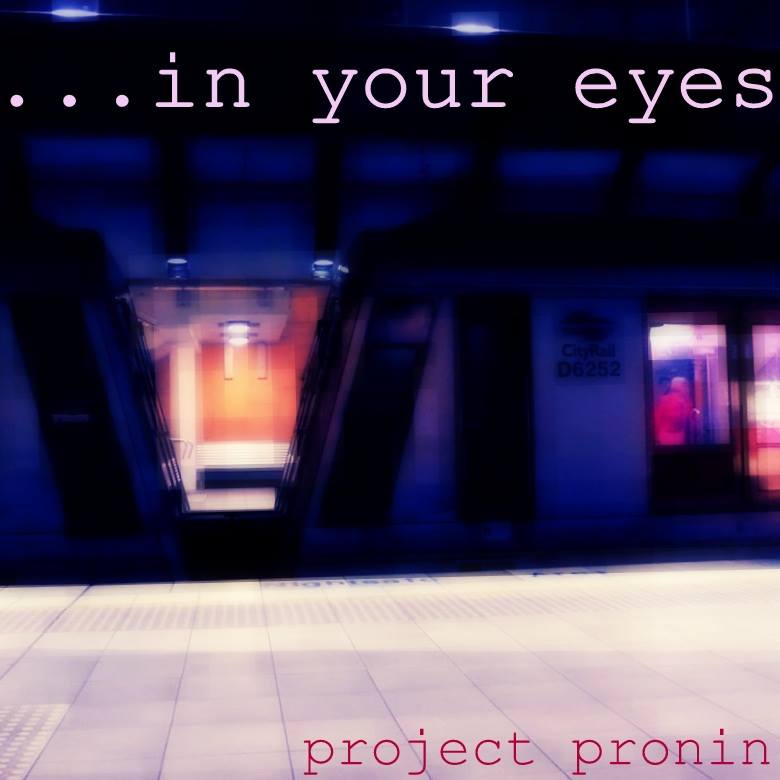 You have to love the experimental-electronic genre of music, especially on an independent level. Generally speaking, this entire style of music houses some really innovative songs in addition to scores of bands that just don’t really know how to define their sound, so ‘experimental’ it becomes whether accurate or not. Experimental isn’t about testing the waters so much as it is about pushing creativity to the next level, sometimes in your own music, and sometimes if you’re lucky, music overall.

But our main man, Yan Pronin of Project Pronin seems to know exactly where he belongs from what I can hear in the eight tracks he’s got posted up to Soundcloud. Definitely an experimental style and sound that ranges from dark to melodic, straightforward to abstract; Project Pronin has been making music for the past four years with the latest release “In Your Eyes” being posted up just over two weeks ago at the time this is being written. I’m not sure if that’s the full-scope of everything happening behind the scenes…there might be more music going on – but many of your favorite artists already release an album every four years or so; when you look at it that way, Project Pronin is right on schedule.

As the dark-melody of “In Your Eyes” starts up the playlist, I’m digging on the piano & drum combination as Project Pronin launches into a style almost similar to She Wants Revenge in their more laidback moments. Yan approaches this latest single with that same somewhat monotone attack that Justin Warfield of SWR uses, just as effectively and possessing just enough emotion to bring the right energy to the lyrics in combination to the music. Actually…in thinking about it…the laidback version of She Wants Revenge is really basically Interpol when it comes right down to it…I’d say that’d be another great comparison to the sound you’ll find on Project Pronin’s latest single “In Your Eyes.”

Bursting brightly out of the dark and into the light, “Summer” takes a ride on distorted guitars and a far-away set of vocals that float into the music with great indie-spirit, sound and energy. Sometimes I feel like the drums are a little all over the map for maybe what the song actually needs or requires…there’s a ton going on…but overall, “Summer” is a track that works really well for Project Pronin and certainly distinguishes his objective to allow his music to take on any style. I do really dig on the drum breakdown and come back into supreme guitar solos with soaring notes and “Summer” supplies that in full around the two-and-a-half minute mark forward.

“Summer” also concludes the latest songs offered from Project Pronin…which when playing off the list at Soundcloud also reveals a step-up in production technique as you’ll have to turn up the following cut, “Until The Heart Stops” to match the previous volumes. I recommend doing just that…Project Pronin has a fantastic electro-track that’s highly inventive and sonically-awesome with “Until My Heart Stops” so make sure it gets the proper listening it deserves and turn it up! With a hashtag of Industrial overtop of this particular tune…that part I’m a little unsure of…to me this is fantastic electronic yes, but not so much what I’d expect were I to jump into an Industrial play list.

Perhaps the largest departure in sound comes through “De Ty” which is a real blend of modern indie and classic ballad sounds from the late eighties. This tune could have existed quite easily when Chris Isaak was on top of the world…today this kind of sound & song struggle to gain that acceptance. Yan plays this one smart however – there are a ton of unique elements and qualities that this song has that others on the list don’t; singing in an alternate language for one example, the arrangement & composition also. Beautifully sung…he’s nailed his part here with genuine emotion and real heart on display; the electronic-switch gets thrown halfway through to keep you guessing as to where this track might twist or turn next before launching back into “De Ty’s” sweet melody & chorus.

I can’t help but feel some of my real favorites are found in the earlier music! “Idea/Draft – Optimistic Progression” might be one of my all-time favorite instrumentals – I mean…LISTEN to this incredible tune! He really chooses smart piano-chords to bring around the emotion in the music of Project Pronin…it’s such an expressive instrument and he places these expressions into “Idea/Draft – Optimistic Progression” perfectly. The beat just becomes entirely awesome by the end as this short & sweet track builds and builds before breaking into “Obama +4!”

I say this with pride…if “Obama +4!” had a physical form I would give it a hug & a hi-five. I LOVE music like this when it’s done right, and Project Pronin has absolutely freakin nailed it here. The samples are so incredibly well timed and the pieces of speeches he’s used from President Obama are just genius. Saying important stuff through samples in music is one of the most incredible ways that electronically-based artists can speak to us…anyone really I suppose, but especially those that usually don’t end up relying on their words. Everything about this tune from the captivating, swelling beat to the immaculately-timed samples just RULES and Project Pronin delivers a virtual ‘how-to’ on cutting these into the mix with precision and style.

Continuing backwards in time through the list, “Never Surrender (feat. Luc La Rin)” has some highlight moments; some of the vocals here are fantastic, others fall just short. The writing definitely has a lot of hooks…the combination and arrangement itself is about as bizarre and experimental as it gets; if I had to describe it, I’d be looking at saying something like…Linkin Park-meets-The Righteous Brothers. Weren’t expecting that were you? No…you weren’t – check it out and have a listen…guarantee you’ll hear what I hear too.

The final tune…the glitch & electro, piano-led song “We’re Near” was technically the first released on the Soundcloud page, nearly four years ago now. What I really do appreciate in Project Pronin is that there has been a real depth of skill on display throughout each and every track. While Yan might not release a song every week anytime soon…at least you can expect a pretty high-standard of quality when he puts one out! Drifting hazily towards the end of this collection of singles, Project Pronin almost trips into David Bowie’s experimental territory…and of course has found yet another style and sound that work well for him.

The wide range of styles, sounds and ideas on a list like this would capture anyone’s interest. Whether a rock, pop, electro or whatever-fan…chances are there’s something here you’ll dig on & love. Personally I’m always going to want MORE from an artist like this…and the rate he’s currently making music makes me want to poke him in the ass like the devil with the pitchfork and tell him to get it in gear! Project Pronin could be capable of heading in any direction…but the important thing is really that it continues on at all; I’m happy to have the music I’ve heard already…and if it means I’ve gotta wait to get some more, I’m willing to do that. Seems like the wait always pays off with Project Pronin…that next single released always seems to have something exciting to offer and reveals another aspect of the creative mind making the music each & every time he releases a new one.

Find out more about Project Pronin at the official Facebook page at: https://www.facebook.com/ProjectPronin