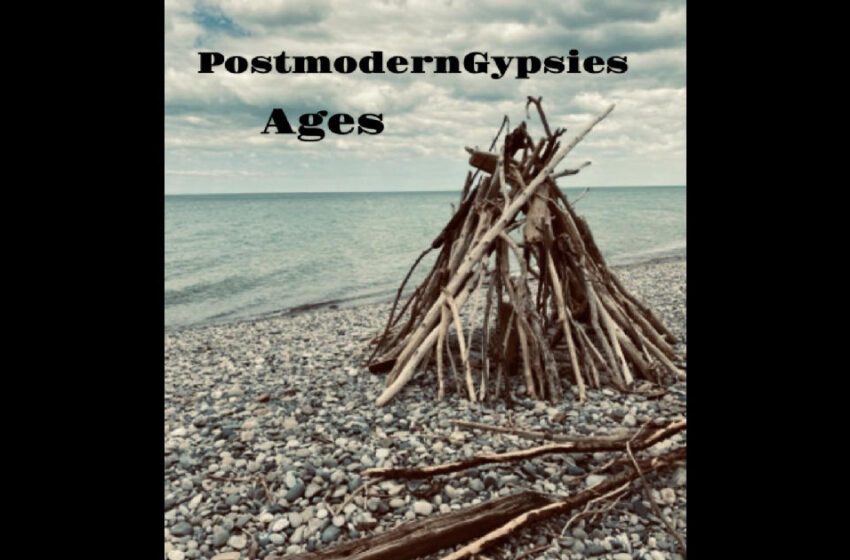 Ayyyyy right on…I’ve been tellin’ you folks out there with the saxophones to start hitting me up lately; it’s certainly what my ears have been in the mood for.  Such an expressive instrument when it’s played by an artist with some know how, technique, and feel – and we’ve got a fine example of exactly that right here in this single from PostmodernGypsies.

As I understand it, we’re familiar with one of the players already – none other than Adam Hilligardt, who plays bass & produces this new single “Ages” – some of you might remember the man from our time reviewing a song called “Bright Light” back in 2021 in a duo that goes by the name of Neil And Adam.  Always cool to have a returning guest on our pages, and I love it when I hear something completely different from what we’ve heard in the past – I’ve long said that, if you’re gonna step on out into a side-project, the last thing you’d want is for that new band or solo adventure to sound exactly the same as what you could do in your band, you know what I mean?  There should be some kind of purpose in taking a new route…maybe sometimes it’s as simple as filling a different creative need, or the opportunity to play with a whole other set of players – there could be and are many reasons as to why this happens out there in this independent scene we share, and in the particular instance of this song “Ages,” it might all come down to the fact that Adam had the opportunity to bring his own father Fred into the mix, who composed & arranged this exceptional instrumental tune you’ll hear.  A collaborative effort on all-fronts, you’ll hear contributions from the talents of Kerry Politzer on the piano, engineering/mixing from Tyler Widman, mastering from The-MPL as well – and that immaculate sax you’re listening to comes courtesy of none other than Alex BONE Saxophone himself.  I’ll admit, that’s the first time I’ve heard the name – but I guarantee I won’t forget it.  Dude puts in a sensational performance on “Ages” that nearly steals the show if I’m being downright honest with ya…ultimately, they’ve got a great balance of strengths overall that I’d never even think to complain about, and it’s fair to say that our hero Bone Saxophone does get to play the starring role intentionally.  Each layer holds its own with competence & confidence though, and there’s no doubt about it – Alex wouldn’t be able to roam as freely and expressively as he does without the steady reliability of those surrounding him, who are all focused intently on making sure that’s entirely possible.  As a result, you get a whole range of sound that’s collectively working together to make the magic happen, smartly knowing to support the lead in the design of the song with full passion from all the rest.

From the dreamy nature of the piano melody, to the smooth & colorfully expressive saxophone tones ringing out loud & proud, to the bass-lines bouncing & sliding around, PostmodernGypsies put out an instrumental tune that’s a great representation of both what they can accomplish together, and the genre itself.  Like if you’re an instrumental fan, or a Jazz fan, or preferably both, you’ll dig a ton of what you hear in “Ages” for sure – there’s a stellar idea at the core of this song and players that all seem to really get what they were going for in this collaboration.  I kept coming back towards the end of this song…where I almost wasn’t sure if they were starting to loosen-up a little in their timing together, or if that was them all moving organically as one…usually if one would slip, you’d hear the rest of a band still remain on-point and that’s your instant cue to know it’d be more of a mistake potentially.  Here in this example, you find that PostmodernGypsies move as a complete unit, which suggests the ending you hear is absolutely what they had in mind, and therefore genuinely played exactly how they wanted it to come out.  It’s a very subtle twist…like they’re rolling to a stop…and they get the opportunity to impress ya with the way they slow this vehicle down and set it on a dime at the very end when they park ya gently in those final seconds.  From start to finish, they’ve found a stellar sound between them that speaks strongly on behalf of the impressive melody composed & arranged by Adam’s father Fred, and they’ve got a spectacular all-star that stands out for all the right reasons with Mr. Alex Bone Saxophone.  Enticing & endearing vibes to be found here on “Ages” that I’m positive a great many of you out there will completely appreciate…the composition is wonderful, and the execution by everyone involved rose to the occasion to make sure the potential this cut had on the page was 100% realized through your speakers.

Listen to more music by PostmodernGypsies at their official page at Spotify:  https://open.spotify.com/artist/4hsiJlZO5re6SbymZZDykH