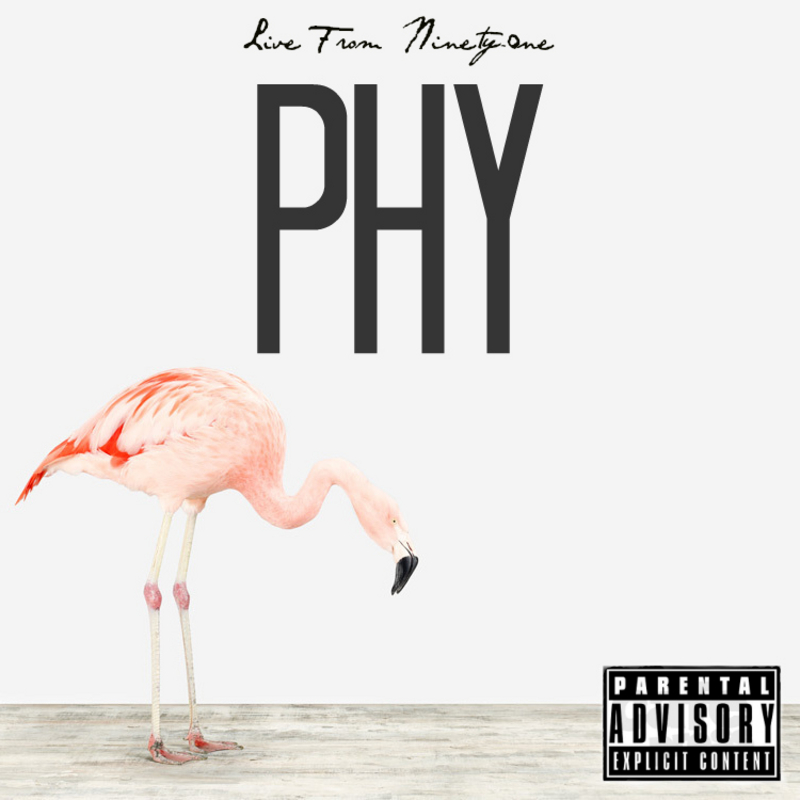 Smooth, chilled-out atmospheres come out strongly in the opening of the latest mixtape from PHY – Live From Ninety-One. It takes less than a minute to want to be a part of the rhythm and groove of PHY, “I Got A Feeling” is definitely not a cover of The Black Eyed Peas…hell, I don’t even know if they were technically even around in 1991 were they? Cause if they weren’t…they’ve got no chance of being covered or even referenced in this mixtape full of ’91-isms; Babyface and Kris Kross are both mentioned in this opening-cut as we head back into nostalgia delivered with a modern-day twist on “I Got A Feeling.” PHY starts this out smart & smooth with the jazzy groove of this opening-cut giving him the space to stop, start and mix-up the rap’s flow with precision and style.

“And you look like that thing that I’m going through” might also go down as one of my favourite descriptions of like, ANYTHING, that I’ve ever heard – you all know I’m not one for writing out many lyrical quotes like how reviewers typically cop-out and pad their writing…but the fact remains – that’s a genius line in “I Got A Feeling” and it deserves some paragraphical recognition right here & right now.

I really do dig the overall jazzy, chill-nature of these opening cuts from PHY – “L.A. Nights” is another smooth track that follows the opening tune perfectly…he’s got this mixtape flowing from its first moment. Metering with precision and continuing to deliver with a real flare and stylistic sound – PHY is easy to understand through his performances as he rhymes with crystal-clarity and creative rhymes that pull you into each separate story.

Yeah…there’s no doubt about this…PHY has himself a winning and innovative mixtape with Live From Ninety-One – you can hear that right in the title-track itself as it begins. Absolutely genius music to be rapping to, made in a real hip-hop style but terrifically unique; these are musical-canvases that would send a few rappers in the other direction or confuse the shit out of them – and PHY seems completely at home here rhyming over these captivating sounds and songs. “Live From ‘91” is almost as strange of a beat as you could ask for to rap over…and man does PHY knock this one out of the park; great hooks, assembly and performance put the lyrics in perfect position to make the impact they’re intending.

I gotta admit…I’ve commented on his ability to rhyme clearly…but I’d be lying if I said I didn’t think I was listening to “Smooth Dougie” as opposed to what the track REALLY is, which is “Smooth Thuggin.” So there’s that…but mistake is on the assumption my ears and brain made in conjunction…for some reason it made more sense for them to hear “Smooth Dougie” than “Smooth Thuggin” – must be a Canadian thing. Do we have any smooth thugs here in Canada? I can’t think of any examples…which is why I guess I heard “Dougie” instead of “Thuggin.” Anyhow…regardless of how you hear it – PHY has done it again with track after track flowing perfectly into the next, progressing through the mixtape with ease, finesse and tremendous skill. “Smooth Thuggin” is a perfect beat-sample to rhyme over yet again, laced with hooks and samples that you can’t possibly ignore. I love the confidence and delivery on the mic here on “Smooth Thuggin” – it’s absolutely some of the most committed on Live From Ninety-One, aggressive, captivating…charged-up and ready to deliver, PHY conquers all on “Smooth Thuggin.”

Getting a little assistance from some true icons back in 91’ – the ladies of En Vogue are mixed into the track “EnVogue” which pays homage to the sounds of the early 90’s R&B sensations.  Slightly more up-tempo and funked-out through the bass-line pumping away, PHY matches the energy perfectly to this track. While the sounds of En Vogue sampled in come out a little more dissonant than the rest of the tone of the music, it can be a little jarring at first as your ears settle into the combination…but overall I think it works. It also maintains that jazzy-element and uniqueness to PHY’s music, pumping up the tempo slightly but also staying true to the cohesion of this mixtape with another clever combination and smooth transition from sound to sound.

There is an “Outro” to the mixtape as well…we had to give the man a minute to let him update this mixtape so we get the full-meal deal as originally it was accidentally uploaded with a faulty mp3.  I’m glad PHY reached out direct to correct it all and make sure we had a chance to listen to this final shimmering, smooth-as-ice & chilled-out last beat.  Loving the vocabulary displayed and the tricky way that he weaves his rhymes around this jazzy R&B beat…and I’m actually loving this guy’s commitment to ’91 overall!  I mean…why NOT right?  We all gotta celebrate something and we all have a time-period in music that moves us more than others…so what if PHY is stuck in ’91 during the modern-days of ’15…he does what he does professionally tight & with real artistic style.

Make sure to jam these available tunes into your face – PHY has done a fantastic job here on the opening five cuts of his mixtape Live From Ninety-One and I can only imagine that there is no possibility he could have let us down on the “Outro,” the dude seems to rock a masterful grip on the microphone and really understand the mechanics of grinding out a smooth-flowing mixtape.

Check out the record for yourself at datpiff – Phy can be found here: http://www.datpiff.com/PHY-Live-From-Ninety-one-mixtape.716758.html