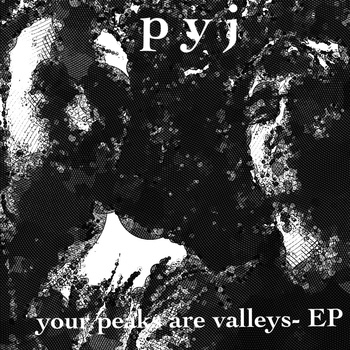 I’ve got half of me convinced I might be listening to one of the best tracks I’ll ever hear in my life right now – the opening and title track to PyJ’s “Your Peaks Are Valleys” is such an atmospheric and original track that the song plays out like a full novel. One of my absolute favorite things, as you readers know, is music that has the ability to take you somewhere when you close your eyes and listen. I have been successfully transported into the musical minds of PyJ safely; this is a band that completely has the ability to write original and unique songs that have incredible life and pulse to them and I am digging on everything this EP has to offer.

We can start by talking title. I don’t necessarily think they’re being arrogant so much as they might just be apt. Your Peaks Are Valleys, at least to me in the context of listening to the innovation on this EP, is nearly a challenge to other musicians and artists out there…a comment on the state of creativity in the present day perhaps. Again, the outset of the album nearly confirms this with an absolutely brilliant and crafty title track. Reaching out and combining all kinds of various influences and sounds, this track is like listening to TV On The Radio with Serj Tankian guest starring on vocals and Peter Buck lending a hand on guitar. The result is that haunting feeling, coming from the chant-like vocals, familiar in the System Of A Down mellow tunes or Tankian’s solo work. This combination of simple acoustic guitar and the amount of space given in the production result in that eerie feeling you remember hearing when R.E.M. put out “Drive.” Chills – straight up.

“It’s Not” has more of that TV On The Radio early-work vibe with the pace and skill of Bad Religion. At only just over 15 minutes this EP rips by quickly, largely due to the explosive franticness found in tracks like this one. Largely combining songs on electronics, guitars and a steady beat – they keep the energy up without losing that original magic they put forth on the opening track on the tracks to follow with “Waste” and “Never Enough” also being punk-inspired and played with controlled-chaos.

PyJ stands for Paul Y Justin – hailing from San Diego & Sacramento CA down in the ol’ USA. For only two people – they are creating gigantic sounds here on Your Peaks Are Valleys. To myself, as a person who has also spent his time in music in a band of only two, I not only understand the challenges that can present – but also the pure joy that comes along with getting something recorded that sounds like it was done by a full five-piece band. These songs take WORK – and you can tell that PyJ has put plenty of that in here. Each and every move, beat and idea are well placed, imagined and realized. The scale of sound in this duo reminds me of listening to Big Black Delta for the first time in these last two years, realizing just how big, innovative and LOUD these tiny independent 2-3 piece acts have become.

“Ladders Up” is the track that will test you. Are you WITH PyJ or not? I instantly loved the beat – I honestly wasn’t sure about the vocals on this one on my first listens…now I seem to not be able to get enough of this finale to the EP. The longest song in the set, nearly hogging the EP at four and a half minutes – this last epic track finds its way along big time. With a NIN-inspired synth-bass line, wicked acoustic breakdowns and EPIC vocal freak-out towards the end, it might have taken me a couple of listens, but I can hear it now. This was the ending that was needed for this set of 5…a culmination of the sounds brought forth in the previous four songs…a virtual melting-pot and swelling of sounds.

So…I know it’s kinda hard to pick up on throughout this review…but I suppose what you can infer is that you can definitely consider me a fan of what PyJ has put down here on record. Truly captivating five songs that demand your attention.

Don’t even try to resist; if you don’t willingly give these songs your attention – they’ll straight up take it from you.