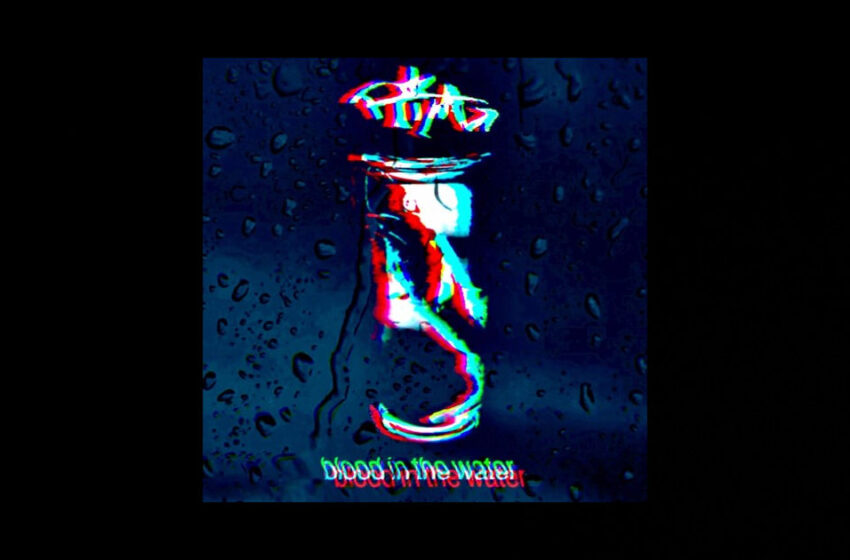 Palm Trees In Moscow – “Blood In The Water” – Single Review

Ha!  Yep.  I’ve got absolutely no hesitations in loving this song.

In a way, I wish I could explain a little better why that is then I’ll potentially be able to.  Think of it like this – there’s probably a certain artist or band out there with a sound you’re completely addicted to yourself…maybe you can’t even explain what creates that allure or attraction…maybe you don’t even have another single friend that gets the same thing outta the music that you do – a specialness that exists that only seems to speak to you.  The reality of course is that we’re never alone, and any concert you’ll see with those incredible artists/bands you love most for their uniqueness will probably confirm that instantly…all of sudden you’ll be in a room filled with people that actually get it…whatever IT is.

Whatever that intangible awesomeness is made of for me, Palm Trees In Moscow seems to be built of it.  It’s such an incredible feeling when you discover music that speaks to you like others can’t – it invokes this remarkable defiant emotion in me…like, as in, I don’t CARE if anybody else ‘gets this’ song – I DO.  And I’ll spin this enough to compensate for MILLIONS of you out there on my own alone if I gotta!  In my heart of hearts, I would hope the creativity and amazing sound you’ll find threaded into every layer of “Blood In The Water” grabs your attention for all the same reasons it sparks my own interest – but I am realistic in that assessment…I know that Palm Trees In Moscow is on the outside of what the masses tend to typically accept readily with its bendable sound & artistic, less-than straightforward design.  It might take some convincing…it might even take ya a couple spins to fully ‘get it’ yourself – I know for the first twenty-seconds or so of my own initial spin, it took more than a mere adjustment to figure out what the heck it was I was really listening to before this vision snapped into focus – but I’m tellin’ ya, what this band is creating is the stuff a loyal fan-base is entirely earned with.  Palm Trees In Moscow is the brainchild of one dude when it comes right down to it – Chris Frantz – I’d like you to meet him, he’s one of my new heroes after all I’ve heard on this new single.  He’s got THE sound I’m most addicted to in the entire world…it’s an Alt/Pop/Indie hybrid of proudly bizarre & highly enticing sound, based out of Baltimore in Maryland…but very much akin to the legendary Canadian band Limblifter, one of my all-time favorites.  Chris himself sounds stunningly close to Ryan Dahle, both through the tone of his voice and the way he writes his material…damn near a dead-ringer when it comes right down to it – and in my personal opinion, that’s one of the most standout voices & personalities to be found in any band, ever.  So make no mistake y’all – Palm Trees In Moscow is keeping insanely good company as far as I’m concerned…Limblifter might have avoided the mainstream here in Canada many ways themselves, but like I said – y’ain’t gonna find a more loyal & devoted fan-base than the one they ended up generating over time.  The path that Palm Trees In Moscow is following, leads straight to longevity and a wildly satisfying lifelong career. 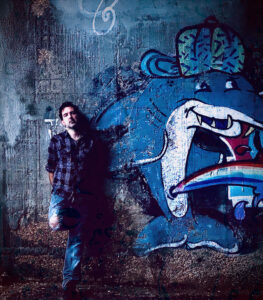 Frantz basically had me at hello here.  Once those first guitar notes started ringing out into the atmosphere, the layers of backing vocals started chattering away, and the absolutely brilliant vocals he sings with started being introduced, it was hook, line, and sinker for me – there was no chance I’d be able to pass up on such an imaginative display of innovative creativity and bold, unique melody goin’ on.  And like I was sayin’ – hopefully…HOPEFULLY you wonderful music-savvy folks feel exactly the same way as I do – because to me, this is the exact kind of expressive & fresh combination of sound & style that should be completely encouraged.  How many songs are you gonna hear like “Blood In The Water” this year?  One.  One song.  And this is it.  And it’s freakin’ awesome.  There’s massive amounts of identity in a single like this – and there’s SO MUCH exquisite detail put in with the multiple layers converging and communicating with each other, that there’s simply never a shortage of something amazing to listen to.  Don’t get caught sleepin’ on this.  Chris is the kind of highly capable artist that WILL create something you’ve never heard before in the music he’s making – and while that may very well take a moment or two in order for us to figure out where he’s taking us next, the adventurous & ambitious nature of his creativity is like a hook all of its own.  You WANT to hear what a song like “Blood In The Water” is going to offer your ears with each and every ticking second as it plays, for texture, for tone, for the creativity you’ll find – it all stacks up into a serious win for Palm Trees In Moscow on this brand-new single, and such wonderfully addictive sound is by no means any small accomplishment when you consider how much work has been put in throughout this entire song.  You’ve got the shiny stuff up close that won’t go unnoticed for sure – but underneath the surface, you’ll find so much more to love in “Blood In The Water” as it plays in the layers below, quite often just adding in more backing vocals from Spoken Word moments, to singing that supports the lead.  Truthfully…the ONLY thing I struggled with personally was trying to figure out whether or not it was Chris’ voice that made the biggest impact on me, or the brilliant creativity he’s put into the music surrounding him…I’m extremely thankful that I get BOTH & that I do not have to choose.

The best way I can put it to ya folks, is to simply say that after this initial experience with the music of Palm Trees In Moscow, I would willingly listen to anything & everything Chris Frantz ever wants to send our way or put out there on the internet, from this point, forevermore.  This is the level of ingenuity and sheer sonic dedication I wanna hear in the music I listen to, straight up – Palm Trees In Moscow has an authentically addictive oddity on its hands with “Blood In The Water” – I love everything about this song.

“Blood In The Water” comes out officially this October 15th – make sure to keep Palm Trees In Moscow on your radar & on your playlists – and go find out everything else that you can from the official website at:  https://palmtreesinmoscow.com