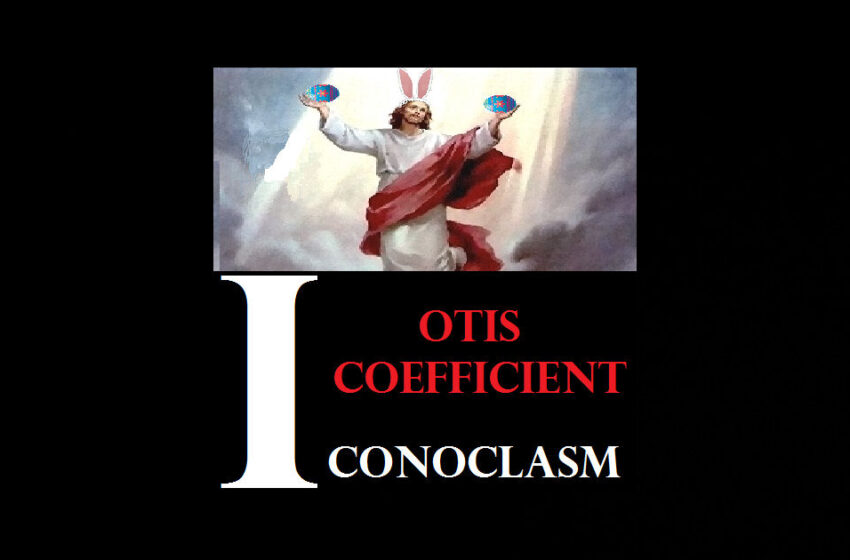 And just like potpourri, you never really know what the heck you’re gonna find contributes to the mix – Otis Coefficient is just gettin’ his career rollin’ from what I can see online, and the man’s got plenty of ideas that’ll keep the entertainment flowin’ & keep ya guessin’ through a variety of different elements.

Synchronicity is such a strange thing sometimes.  I was literally just talking to a good friend the other day about the band Soul Coughing and poking fun at the dude for not having gotten into their catalog years & years ago – and right here in my first introduction to the music of Otis Coefficient on his self-titled cut, there was Mike Doughty’s oh-so-familiar voice with a sample of “Super Bon Bon” kickin’ outta my speakers the moment I pushed play.  I’ve been listening to Soul Coughing since I was about sixteen I figure…somewhere around there; I’m forty-one now y’all…that’s more than half my life, so hellz yes – that’s always gonna be a welcome sound to my ears, and it sets the stage for the type of lyricism that Otis wants to rock with on this initial impression.  Oddly enough – synchronicity shows up again here – it’s been years since I can remember reviewing a self-titled song of any kind, and “Otis Coefficient” makes that two for me this week alone after having checked out Michael Angelo’s “Michael Angelo” earlier in November.  Music is strange like that though y’all…maybe it’s something we all feel in the air somehow…vibes like wires connecting us all to what that next phase of the future…who knows…but I can tell ya for a certain fact that this isn’t the first time a bizarrely comparable situation has come up in this kind of sense.  We’re all much more connected to the music being made in the scene than we think.

Anyhow.  O.C. here is one of those dudes that clearly knows the roots of the old-school and has a respect for the art of the rhyme – that’s something longtime fans of Hip-Hop/Rap would instantly be able to spot right off the drop as the man starts rapping.  Like any artist or band at the beginnings of their career, he’s got plenty of opportunity to evolve and grow in what he does, but he’s also already showing all kinds of potential on his debut record Iconoclasm that speaks strongly on behalf of what he’s capable of now too.  Trust me when I tell ya, you listen to the strengths in the words he’s written and you’ll know he’s got a gift in that regard – and generally speaking, when you run into an insightful artist like Coefficient, chances are they’re the type of people that welcome the feedback and directly search for those ways to become better in their art & all that they do.  Considering that’s all I ever intend to do with whatever I’m writing…let’s see how it all shakes out…because this could go either way for sure – if you ask Otis, he’s “made the ballot for hall of fame induction” right here in his first year…and I don’t think I’m quite ready to go that far with it.  I like some things…I definitely dig the confidence…but there’s still work that needs to be done here homie if we’re gonna live up to claims like that for sure.  I’m all about the boastin’ – that’s no problem whatsoever – that’s the roots of what the trenches of the poetry in the old-school rhymes all grew out of and an essential part of Hip-Hop’s vibe still to this very day – but it is dependent on what’s being boasted about, and how much of that can be back up through example.  So when I hear a line like “you up for hall of shame for that lame flow, piss poor production” right away in the first verses of “Otis Coefficient” – and I’ve already gone through the jarring way the sample from the Soul Coughing intro breaks way to reveal a way louder mix on the music/vocals that followed…yeah man, I’ve got some questions about what the measurements & standards for “piss poor production” are gonna be.  I’m not at all suggesting that’s what you hear – a couple quick turns of the dials on the boards could fix something like that…but I am saying the production ain’t quite yet at the level where Otis really should feel THIS confident in calling out others; it’s one of those gotta learn how to walk before you can run situations, and he’s still got plenty to prove with this being his debut & all.  All that being said – whether or not he’ll take what I say to heart or not…that’s up to him – he kinda makes it clear on “Otis Coefficient” that he knows where he’s at when he raps: “yeah you might have a problem with the way I brag and boast / I’m Jay-Z on a scale of Biggie to Chanel West Coast.”  Like I was tellin’ ya – these are BIG claims to live up to…but I’d imagine part of this method also applies an internalized pressure on Otis to be the best that he can be as well – and in the end, that’s fuel for the greatness he’s seeking out.  As far as pickin’ on Chanel West Coast goes…man…I sure as shit ain’t sayin’ she’s the best thing out there on this planet because she is far, far from that – but I am sayin’ it’s almost strange how much hatin’ she does receive on a global scale, all the way & right up to the independents, like right here on Otis’ track.  We all saw Fantasy Factory didn’t we?  She took a full-on soccer ball blast straight to the face…she’s paid her dues, hasn’t she?  Anyhow.  I’m kidding around here to a degree – that line made me laugh out loud just like it was intended to because I knew exactly what he meant…don’t get it twisted, I’m not taking everything so seriously that I’m not enjoying myself.  Like I was pointing out at the very beginning of this review, Coefficient will take you through a series of Pop culture references from Game Of Thrones to Breaking Bad & just about everything else in between – which is another classic staple from the history of Hip-Hop for sure.  He is genuinely gifted when it comes to laying out his lyrics in an extremely unique and poetic way that’ll definitely provide you with thought-provoking moments, humor, insightful commentary…all that stuff checks out solidly, and his word selection is superior to most of what’s out there as well, which will eventually become a huge advantage for Otis over time.  Right now…here on this debut, you can hear a song like “Otis Coefficient” is crafted direct from the paper & pen…and while that’s ultimately what everyone’s gotta do to an extent, the key is not letting us know that in the final results…as in, rehearse, rehearse, rehearse.  Right now…Otis proves he can out-write the majority of the emcees that would even attempt something original – but we do need to feel him feelin’ these words more than he is right now to make them spring to life as they should.  Think of it this way – it’s one thing to rap about confidence, and it’s another thing entirely to rap WITH confidence in an undeniable way – I felt like Otis is still missing a bit of the punch and weight his words can potentially have because of how intricate, complex, and involved these rhymes genuinely are.  Knowing the material inside & out is the only way I know of to combat a lower energy than you want to hear in the results…the more you know every single twist & turn of how each & every syllable strings together, the more fluid the bars become.

Lyrically though, Otis has got it goin’ without question…this is the main asset to build his future around.  While I think there’s still a bit of the hard mechanics that can be ironed out in terms of the precision in the metering & fluidity of the flow…the whole one syllable too many, sometimes one too short type-thing tends to trip him up just slightly in a few spots in both “Otis Coefficient” and “I Still Love H.E.R.” with that split-second hesitation we can hear, or hurried rush to fit a little more into a line – when you’re looking at his words flash by onscreen, you still can’t help but admire the layers of craft involved.  For real – I was freakin’ astounded by what I heard & saw in “I Still Love H.E.R.” – I told ya straight-up in my first impression on “Otis Coefficient” that it was plenty clear that the man knows his Hip-Hop history – and if there was any doubt about the truth in that, believe me when I tell ya, this cut clears that up 100%.  In three-minutes of time, Otis will educate the masses on what’s practically the ENTIRE history of the genre through his words – that’s the depth we’re talkin’ here – and honestly, it’s mind-blowing.  Give the man some real credit here – I’m assuming every single one of these artists he’s name-checkin’ along the way have had some impact not just on the history of music, but mean something to Otis as well…and when you consider how many people he’s included into this story on “I Still Love H.E.R.” you have to acknowledge the encyclopedic level of knowledge he’s got.  No joke – most emcees would be scouring the internet for days, weeks, and months to get the timeline this accurate and well-detailed – the lyrics of “I Still Love H.E.R.” ended up being one of the most enjoyable experiences I’ve had in music this year for that very reason.  Hell – I even know a few thangs myself, but I still felt like I learned more just by listening to this cut…and to me, the value of education through music like this, is fully priceless.  Also, as far as the production goes, the mix was more on-point with “I Still Love H.E.R.” without a doubt.

“I aim high with my delusions of grandeur?  Yeah maybe / Don’t hate the player, hate the game, shit we all a little crazy” – I couldn’t have put it better myself.  Otis has got a lot of great things goin’ on for himself this early on in his career – and this is the kind of artist you can tell from the dedication put into his words, that he’s just gonna keep on gettin’ better and leveling-up along the way.  Iconoclasm is where it all starts, but it’s far from where this guy’s story will end – I’m stoked to hear how Coefficient evolves over these years to follow & I guarantee each time he steps up to the mic, he’ll bring more to it.

Listen to the Iconoclasm album at YouTube right here:  https://tinyurl.com/Iconoclasm-Album