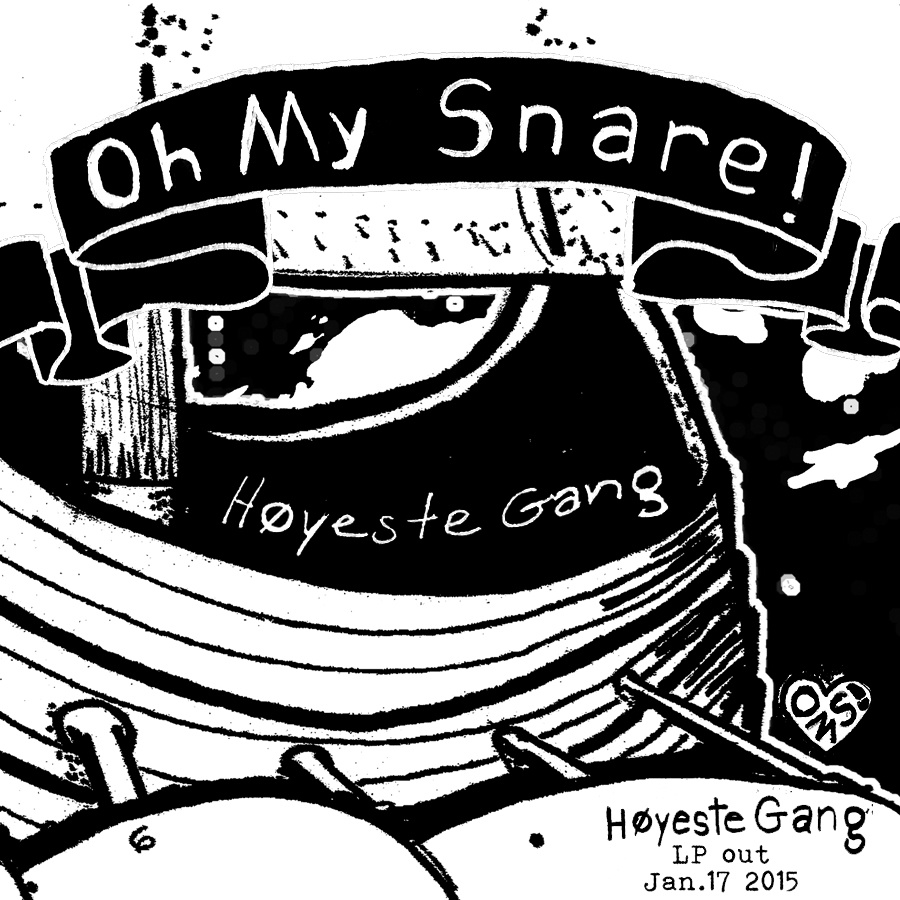 Some albums just sound fuckin good when you max the volume…turn this UP!

For our Canadian followers…and well, for the rest of you of course, the band in review – Oh My Snare! comes to us from Montreal, Quebec, the eastern-side of our beautiful country and certainly one known for its rich culture, diversity and of course, music. This four-piece is every bit of the evidence you need to hear why that scene still thrives strongly to this day; Oh My Snare! has released an album full of bright punk-pop sounds that go right to the brain through incredibly energy, innovative songwriting and some seriously inventive melodies.

Props for having Propagandhi in their listed influences too…what a great band those guys are, and that’s an influence you can hear on this new album, Høyeste Gang. At first impression, the opening track “Unforetold Hands And Voices” reminded me of some of the older tunes by The Mighty Mighty Bosstones…but thankfully Oh My Snare! quickly puts distance between them and the MMB sound…or I mighta tuned out haha…was never a fan. Oh My Snare! starts the convincing and coercion quickly with a committed performance in this first track that explodes out of the speakers into a chorus that sounds as if the party is happening right next to you. It becomes an anthem by the end and certainly something you want to shout along with, even in your armchairs.

But for the old-school, like myself…this is an awesome trip into the heyday of underground music during the time of grunge. There were so many incredible sounds being made on the fringe that didn’t catch on nearly as much in the shadow of grunge-giants making their mark…but bands like Sebadoh…Superchunk…L7…these bands were part of the birth of the true-indie music movement, paving the way for bands like Oh My Snare! here today. A track like “Hearken Unto My Behest, Biatch, For Thou Hast Boobies” is a real throwback to that time. As a MASSIVE fan of Superchunk, having this comparison in the music is nothing but a compliment from me. Tracks like this one and later on “I’m Not Robocop Material Anymore L” really bring that treble-toned pop-indie aggression and flavor right to the top in these absolutely intense and shredding-guitar driven songs.

The balance in this band is actually pretty astounding in itself…everything manages to stand out, or come together, perfect in songwriting arrangement & structure and maintaining an aspect of complete chaos. Controlled chaos I suppose, for short…whatever, I’m SUPPOSED to write a whole BUNCH of these word thingys so that’s what I’m doing, clearly.

Listen to the song “If Krillin Came Back From The Dead Like 3 Times, I Think We Can Do It Once,” and listen to the way they shift back and forth, converge and separate…there’s an ebb & flow to this energy that is completely well-harnessed and very pro-sounding. Much credit to Lily, bass & vocals of Oh My Snare – not only do I love the tone of her voice and the instincts she has in attacking the microphone, but realize here people…that she’s almost always having to compete with the screaming vocals of either Jorel or Dan alongside her AND the insanely intense hard-hitting of drummer Seb. Her voice…compliments these others absolutely spot-on perfectly with an incredible raw power breaking through the mix to our ears every time. This lady makes NOISE…and I love it.

Speaking of ladies…here’s one for ya. A nice ‘slow-jam’ ballad amidst all this power-pop-punk chaos, a break for your ears, speakers and heartrate as the four of them settle down with us all for just a moment. “All Sauron Needed Was A Little Love,” is not only a spectacular theory, but a great fuckin song. Right around the two minute mark Lily is just LOSING it, Jorel is KILLING himself and these two are literally putting on a performance to remember through the vocals alone. Combined with a perfectly-toned and beautiful guitar-line, sullen lyrics and a catchy-flow…this track makes you want to climb an entire mountain and shout this with them into the valley way down below. Even in their quietest moments, this band still manages to make an incredibly huge sound.

“If You Smell Flowers, Look Around For The Coffin” is an epic ride. Complete side note; anyone else noticing that simply writing their titles out basically writes these paragraphs for me? Thumbs up to that!

Okay…so…back to “If You Smell Flowers, Look Around For The Coffin…”

This track has all the energy, heart and conviction of a well-seasoned band and brings together all the best elements of Oh My Snare! together in a fireworks-display of a song that fires of in all sorts of incredible colors and directions. One of the strongest hooks they’ve written on the album, the chorus here is insanely catchy…and though it ends in this song fairly early in the track itself, the changes to come after are of an equal awesomeness. A dynamic song-within-a-song-within-a-song, a track like this literally fills my entire head with equal parts sound & delight; there’s just so much here! From its pop-punk Superchunk-ish start to the random synth breakdowns of seconds long, to the crunching explosion and completely euphoric collapse…this track is the equivalent of a four-course meal for your face-holes.

For a BRIEF second…they almost lost me…

The beginning of the final & title-track “Høyeste Gang” has a couple lines at the beginning of the verse where lead-singer Jorel is so low and grizzly he nearly sounds like Astro from The Jetsons…and I’m just not quite sure that’s where a person wants to take their music at the end of the day! He snaps it together quickly with his signature reckless abandon bonding with an electrifying and energetic finale for the album. Again, drums are just MASSIVE and towards the end of this track their drummer Seb makes the explosive and memorable impact that this effort deserved and then some.

It’s frantic as fuck all the way throughout the experience of listening to Oh My Snare! – and I ride I certainly wanted to take again immediately after my first listen. All this pent-up, stored energy they released here on Høyeste Gang is only a strong indication that their supply is limitless; can’t wait to hear more!

This album officially drops on January 17th!  Find out more about Oh My Snare! at their FB page: https://www.facebook.com/ohmysnare