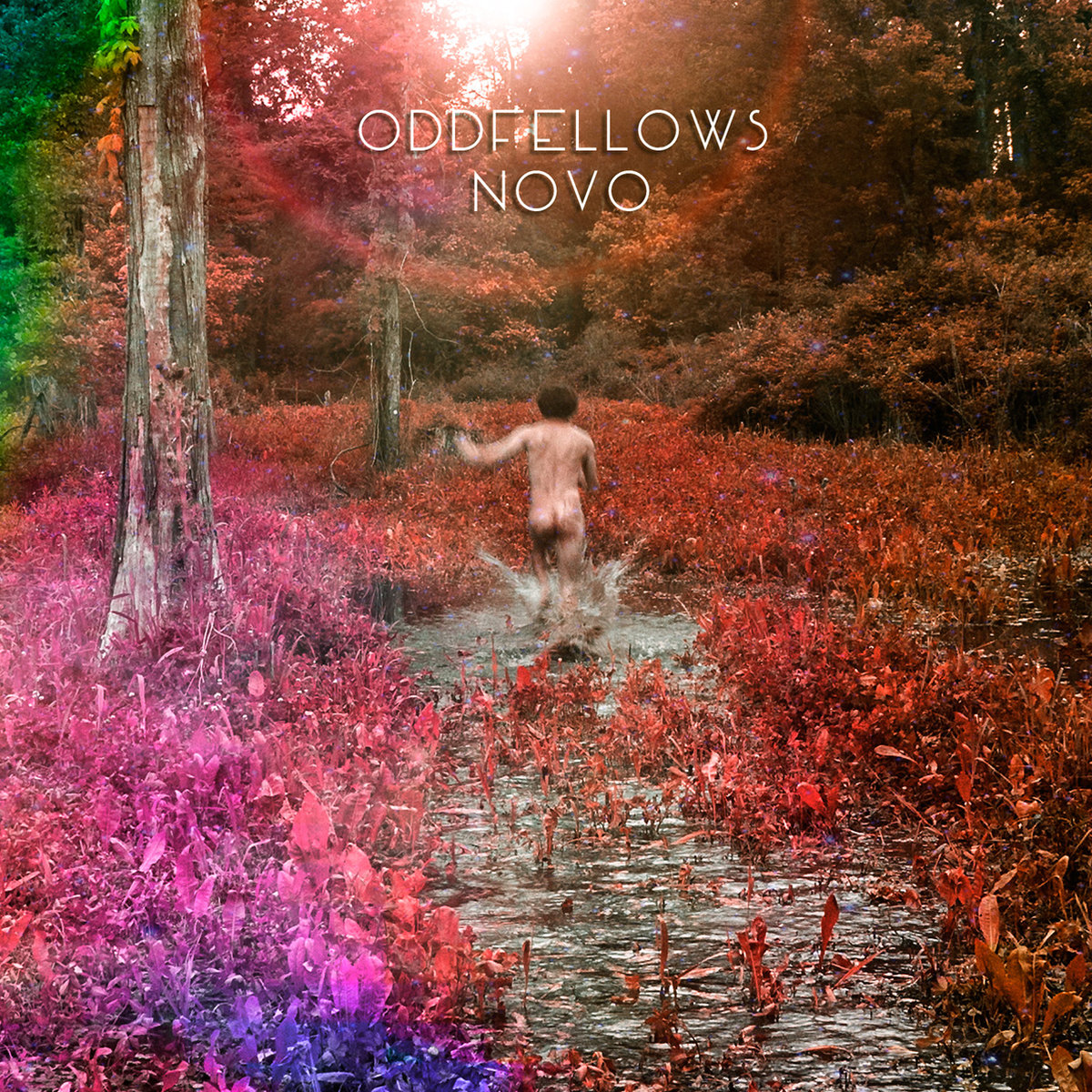 There was a small part of me that was trying to whisper how late it’s growing here in BC…and that I should start thinking of packing it up for the night. Something about the first song on the new NoVo album by Oddfellows kept me wanting to stay awake…the instrumental opening of “Gaia” is extremely inviting. Right as soon as I decided to open-up a word-document and keep my eyes open…I felt like I was instantly rewarded with the howl and melody of “Miss Fox” – I think I’ve made a great decision to go for another hour and reward myself for a hard day’s work with some excellent music before I hit the sack. Plus…it’s Saturday night…well, I suppose technically Sunday morning now…but let’s face it – there’s plenty of you music-fans still awake and burning the midnight party-oils…so one more it is!

To excite many of you out there right off the bat…I’ll say that not only are the guitars extremely impressive to the ears as “Miss Fox” starts to build…but the entire compositions zooms quickly into the fantastic with synth and drums all combined together for a maximum result. Somewhere in the midst of the Cold War Kids, Florence & The Machine and the blues-version of Eddie Vedder…there are some really unique and excellent choices being made in the vocal department. The music has that subtle intensity like Minus The Bear but with more of a focus on setting a melodic stage that works to the strengths of the vocals…but you’ll hear what I mean in the breakdown heading towards and into the two minute mark. While the vocals have certainly hinted at something extraordinary to come…nothing beats the moment that they reach towards the end of “Miss Fox” right around three-minutes and forty seconds (ok ok ok, EXACTLY) – that’s a perfect an example of when to let loose…right at the height of the build & music…Oddfellows nail it here.

That down-home Louisiana accent makes itself known much more on “Going Somewhere,” which is more of a mid-tempo ballad for the most part. There’s a great breakdown once again…the bass stands out & shines as the music spreads-out a little…the reverb & echoes get added to the vocals and it passing the two minute-mark by a bit you get a whole second-chapter of this tune. Great ideas and clever twists in the writing on what seems like it might have been a straight-ahead melody at first on “Going Somewhere” – it would seem these fellows are not only odd, but that they also have several tricks up their sleeve to keep our attention and the music moving in incredibly diverse directions.

“Vinesarveins” will give you a clearer example of the sound I described in “Miss Fox” – but the chorus in this fourth tune really hits that magical-spot in music for me. Seriously fantastic melody here…the verse is great too…just way more serious than its friendly sounding chorus. Lyrical imagery is strong on “Vinesarveins” and soon enough, the psychedelic aspect of Oddfellows music makes itself boldly-known with an expanded-idea bursting into a colourful synth freak-out dance-party for the final minute of the song. I can’t quite explain it…it’s kind of like Austin Powers decided to join the Kings Of Leon for a moment. Ha! Whaddya know – I can explain it after all! That’s definitely how I feel about it. I should also mention of course, that it definitely works extremely-well despite how strange that pairing might sound to you through my written description…trust me here!

Oddfellows find comfort in the strange. “Legba” is certainly a strong piece of evidence to support that claim…but if you’ve taken the journey along with me so far on NoVo – you’ll already have that understanding that clearly this band thrives on the bizarre, the creative, the unexplored…this is really cool stuff to listen to, gotta say. “Valar Morghulis” will absolutely remind you of Florence Welch…that sound/style from a set of male-vocals really sounds fantastic…like I said, this is somewhat unexplored terrain I feel…there’s a lot of really NEW things happening here in the ambitious combinations that Oddfellows are going for. “Valar Morghulis” pretty-much puts a massive checkmark in the WIN column all over the place…some of the best guitars and bass-lines are right here on this cut, along with some of the best ideas for production itself. I love the slow-tempo solo that takes place heading into the two-minute mark…but like many of these tunes by Oddfellows – there’s still another chapter to play-out by the time this track will end. Great raw-expression and emotion to the vocals as it breaks into the switch with a highlight bass-line and searing guitars that begin to rage from the left to the right of your speakers in stereophonic-spectacularness! Bet no one’s written THAT before! But in fairness to the band…I’m really just an average writer; if “Valar Morghulis” didn’t kick SO MUCH ass I’d have never come up with anything remotely as clever as ‘stereophonic-spectacularness,’ I assure you.

Songs like “Peacemaker” have lots to offer…it might range a little in terms of what’s accessible for the people out there…those looking for simplified songs of verse-chorus-verse can shuttle themselves back on to the field with the rest of the cattle out there…this is music that really takes you for that journey and really provides a new-sound and captivating experience in listening to each track as they play on. You won’t see what sound might come at you next coming…but what’s most amazing is how incredibly cohesive that the album sounds overall. NoVo’s magic really does largely come through the sound of the vocals…that and a strong commitment to do nothing straight-ahead…to make the music complex but melodic, passionate and as vivid as the imagination itself.

Case in-point, “We Stayed” dials back their psychedelia for a truly tender moment on the album. Featuring the sweet-sounds of Kristina Ostrom on vocals…I’ll say this about her and Oddfellows together; sounds great! I think…and this is all just completely theory…but I have this weird feeling that Kristina is still fairly new to it all – and that has nothing to do with the sound of the performance so much as maybe the approach. Ha! This theory is a strange one all over…and I don’t want anyone to get me wrong…because I really DO think she sounds fantastic on “We Stayed” – I suppose what I’m hearing here…is what I think is the Oddfellows doing both her and all of us a solid by introducing us to Kristina. I hear a fragility in her voice that sounds almost as if it reveals the newness & wonder of the experience…it’s not a bad sound at all – but I have a feeling that Kristina is the kind of lady that is going to benefit from the comments of a ton of reviewers out there praising her stunning performance here. I think Oddfellows have recognized just how special her voice is…and how emotionally-powerful it could become with a little confirmation and confidence…and well…let me be one of the first to do that – Kristina sounds angelic, sweet and completely authentic on “We Stayed.” Besides…the rest is all just my crazy theories anyhow…but credit where credit is due – she sounds great on her own, or in the harmonic combination between the vocalists on “We Stayed.” A real highlight of the honesty on this record – loved it.

They bring the funk to “Monkified” which I’ll fully admit made me crack a laugh when I read the title to myself. I get it…it has everything to do with the looseness of this track and the rubbery bass-line…the sliding guitars, shifty-beats and bending synth notes. Flexing their own-brand of psychedelic blues – this song grinds along and really finds its way to an unexpectedly smooth-ride. Always big fans of mixing it all up one final time when the opportunity arises…they trip-out one final time on the breakdown at the end and on into “De La Rose,” another real highlight on the NoVo record. Oddfellows find their rhythmic-rock best here in the melody of “De La Rose” and really let the sparks catch fire as they head into the spaced-out chorus. Fan-freakin-tastic guitars as “De La Rose” comes out of its first chorus and into the smooth-roll of its second-verse; you might run across one or two of those infamous dissonant Vedder-esque notes as the vocals let it all-out from moment-to-moment…but much like when you hear it from good ol’ Eddie himself – you want to root for Oddfellows…it all becomes acceptable somehow. The instrumental break in “De La Rose” is the most magnificent to grace the album…the bass-line solo is fantastic…the drums amazing…the bring-back after four-&-a-quarter…just pure genius. The guitars come soaring back in with a sonic-brilliance and searing-melody to their tones…”De La Rose” is a real jaw-dropper. Told you Oddfellows had some tricks for ya – look at that sly placement…putting one of their absolute best right before the end like that…I tell ya…

For real though – this has been extraordinary, unique and truly new despite any comparisons I’ve made already. While Oddfellows might have moments where they drift into a similar sound or recognizable tone – there’s no denying just how truly ‘their own’ each of these songs really are. As “Thessia” begins the expanded…slow-tempo, desolate feel to the album’s final-cut – I find myself truly impressed at just how clearly defined Oddfellows have made their sound; I could pick this out of a musical lineup of a 1000 songs blindfolded without hesistation – and they should be extremely proud of that. The haunting sounds and mystical-blues sound of “Thessia” makes for an extraordinary ending…like it was Chris Isaak’s “Wicked Game” created from a completely twisted perspective and alternative mindset; the guitar tones and mood of this song is every bit as dark as it is beautiful.

Perfect ending as you could ever hope for. There was NO WAY I was going to bed before I finished listening to NoVo – they kept me so completely attentive, captivated and wonder-filled that their music easily replaced what another four cups of coffee could have done for me at this late hour. But believe me when I say it – there is nothing but complete and utter WIN stamped all over this album – that’s not the sandman talking…chances are I’ll be up for another half-day here at least after the inspiring sounds and ideas I’ve heard on the new Oddfellows record; this was fantastic – and it’s their DEBUT. Look out for this band…they’re coming out fully-loaded and ready to roll right onto your playlist.