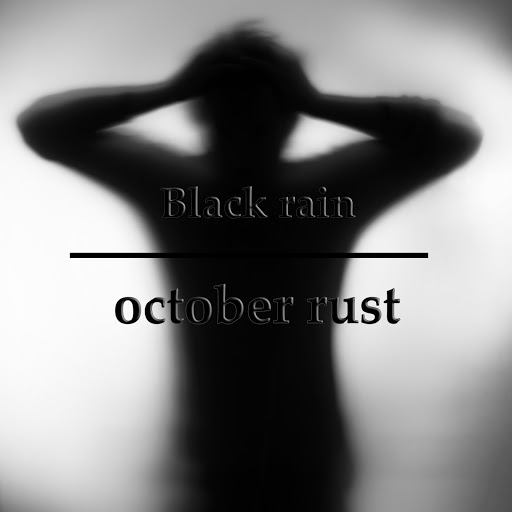 Concept album! Cool! I can never get enough of this style of an album…they just don’t happen nearly often enough. Involving mind-trickery, murder, love and loss…it’s a sonically-layered journey through some of the darker corners of our mind but also thought-provoking lyrics that make you question these various scenarios and scenes from the perspective of how you might have handled it all yourself. October Rust has built an intense story to accompany the music & give it an overall dark-melodic mood that is audibly palpable…and woven it successfully into their new seven songs on the album Black Rain.

From what started long ago in 2009, October Rust officially released the new album on my birthday on January 25th this year in 2015. As they open up Black Rain with “Backflash” I got that chill from something special drifting through the speakers with the unique texture in the opening. Everything chimes in eventually in due time adding layer upon layer with guitars, samples, bass, playful laughs and a gentle beat. Other than the laughter, it’s an entirely instrumental song and gives you the uplifting feeling of excitement and possibility in the air…hearing a song like this fills a guy like with me with immense hope that anything I might hear afterwards will be anywhere close to the gorgeous quality and beautiful, subtle melody I’m finding in “Backflash.”

Drifting towards what I’d consider closer to what you can expect from October Rust in terms of the overall sound, “Sin,” is a dark, slow-beast of a song. Very interesting ideas on the vocals…great harmonies that would remind you of bands like The Verve Pipe or perhaps even King’s X. I’d actually probably go with King’s X when you consider the music as well…not only are those harmonies rich, vibrant and completely perfect in their tone but the music has real power and crunch. Defined parts come and go and switch out in perfect time as the duo of Christoffer Tholsson and Henrik Svensson put on a real display of the magic that’s brought them together in their combination of dark-sparkling talent.

Heading into the atmosphere of “Speaks To Me,” I swear…there’d be a lot of people that might just actually mistake this band for Pink Floyd on a song like this. The guitars sparkle and drift melodically through this beautifully melancholy mood they’ve created. Almost Zeppelin-esque as well from like, that eerie but melodic feel you get from their music…and just like both of these bands, October Rust brings in a huge switch halfway through to find an incredible second gear and raise this song up to the rafters of entertainment. Excellent dynamics in the music of “Speaks To Me” and some of the best lyrics you’ll hear on the record with a clever roll & flow that reaches out to the very end of the song.

Another smart example of their ability to reform, shape and texture their music with incredible atmosphere is “Whispers.” For being based in Kalmar, Sweden…the astounding grip on English words that October Rust is purely mesmerizing. “Whispers” is so darkly-poetic and incredibly smooth throughout its haunting opening that when the kick-drum starts to thump it’ll jump your heart two-beats forward as the growling lead vocals descend into menacingly dangerous sounds and intent. The way this track is assembled is a true testament to what two people can achieve when they’ve really hit their creative stride and allowed themselves to make real art. The focus is always on the music and it never wavers…it’s all delivered with quality and professionalism but at the same time, that focus is stemming from a real commitment to bring this entire concept to life – and these two pull it off perfectly at every audible second of their album…this is truly amazing writing and music delivered at the highest of calibers.

I like the slight drift & departure through the vocals I found happens in “Whispers” and especially in “I Forgive.” Taking on a sound with a little more treble & tremble at the root, October Rust reminds me of the spectacular combination of dark melodies that happened when Michael Stipe of R.E.M. got together with Placebo…it’s that effective. The isolation of the music in “I Forgive” echoes the isolation we sometimes experience in our mind…the chorus feels like those moments where we accept who we are and break-free of the cage in our mind. I personally love the vocals on this entire album, but in particular, “I Forgive” really seems to have that extra added emotion that really pushes in and twists the knife to make you feel it and remember the moment forever.

“Beautiful Mistake” might be the questionable song, but really…there isn’t anything I’d question on this entire album. Perhaps relying on a hook that’s a little easier for them than the rest, this song almost flows along too smoothly…if that’s even a thing that can happen. What I do really dig is the actual way the words are sung throughout this sadness-induced rhythm…the emotion is measurable…October Rust has an incredible ability to really bring you into their world.

As it ends with the piano, guitar combination of “Wash Me Away,” you can hear the album’s title make its way into the words as they continually build this epic closing track with drums and amped-up electric-guitars. Rather than explosions of in-your-face-rock…they really cleverly go after pumped-up pop-rock rhythms – all still mired in the dark – but truly full of hooks that pull you in sharply. This final tune reminds me of Vertical Horizon somewhat…I miss that band.

But now I’ve got October Rust…so I’m feeling quite good about that. I’d never put this album down – it’s solid as cold-steel from beginning to end.