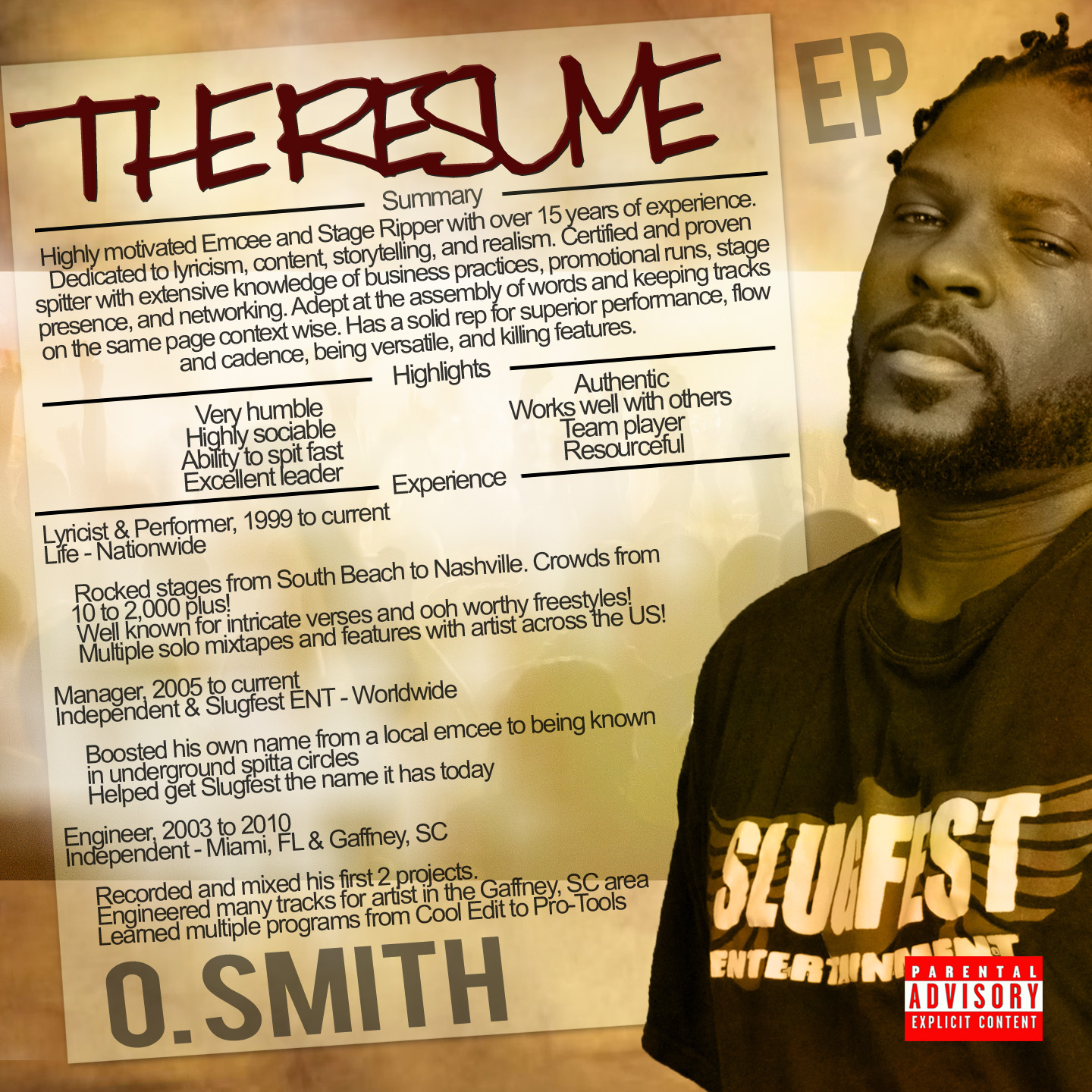 Flossin,’ Rick Ross’n…just another day in the life here at sleepingbagstudios…

Rapper O. Smith is here to throw out some wicked rhymes, intense beats with a serious groove and provide good times to those listening. With some serious skills in lyrical precision and hooks that are guaranteed to capture your attention in full; O. Smith has found the right groove for himself here on the Resume EP. He rhymes with confidence and style; this current release shows the maturity of an artist that would never be found sitting on the sidelines – O. Smith is here to take charge of the spotlight in full and ready to take his entire game to a whole new level.

With music that can be as bouncy and full of energetic beats as old Outkast, perhaps even Nelly, it’s hip-hop with true-rap lyrics & flow that take these sounds to an elevated level somewhere in between those two popular genres. On the mic, O. Smith can be a hook-provider, much like Nelly in that sense…he’s definitely writing tracks that will stick in your brain; the second time you’re hearing an O. Smith song, you’re already at the ready to rap out those hooks aloud with him.

Resume starts with a powerful punch in opening with an extremely single-worthy track, “Awesome.” Using a sample that follows the melody of “Ring Around The Rosie” could have been a risky move; but of course, melody is one thing, words are another entirely and replacing the words to “I’m So Fucking Awesome,” does as much to bring a smile to the face as it does to serve as a massive proclamation of the very arrival of O. Smith into your ears. Full of hooks guaranteed to pull you in, he demonstrates his mastery of flow instantly, showing you right off the drop that he can rhyme as quickly and as on-point as the best in the business today.

If you’re somehow NOT convinced of that in the first track alone, move on to the next and eat these words; “Created A Monster” is an apt title – O. Smith has been let right out of the cage on this track. Getting assistance from fellow homie Ksino Da Don, the two of these MC’s literally attack the mic on this track and just punish syllables one after the other. They create an extraordinary intensity and it isn’t even a minute into this cut before the rap starts flying at light-speed. Think something akin to the speed of Busta Rhymes and you’ll know where these guys can take a rhyme to, speed-wise. BUT…as much as I might LOVE me some Busta myself…let’s face it, half the time his rap comes out so quick that you can’t catch a damn word. You get the opposite effect here; O. Smith not only rhymes it all out at a furious pace, but it comes out clearly. Even the rap verse just around the three-minute mark – seriously, go LISTEN to the skill in this verse – but even at this blazing speed, Smith finds precision, rhythm and gets the job done through sheer skill and clear, confident delivery.

Midway through the EP, Smith steps on the gas and rips into “Speed Racer.” While I think he nails the verse through and through once again; this has that real anthem, crowd-chanting style kind of hook that works for some, not for others I suppose. For me, it was a bit much…it almost seemed like one of those attempts frequently made within the genre to bring around new buzz-words…just a little forced through the chorus. Verse-wise, I think it’s nailed tight and Smith is again demonstrating versatility & dynamics through a tricked-out delivery.

“Clean Up Man,” nearly follows the same ‘buzz-word’ theory in the chorus once again, but I found this track much more appealing overall with its smooth groove and melodic flow. O. Smith sounds comfortable here and that’s not a bad thing at all; in this track he trades his ability to rap at warp-speed for a solid tone and clever, chilled-out rhyme and beat. It’s the end of a great introduction into the world of Smith, one that certainly convinces a person to check out what he’s up to further down the road. He’s clearly capable of it all; whether full-speed or off the throttle; O. Smith manages to never drop his precise ability to meter the tempo of his rhymes to fit perfectly with the beats on Resume.

Check it out and hear it for yourself! If you can’t handle those pesky cuss-words, he’s even added a clean version of the single “I’m Awesome,” at the end of the EP, just for you sensitive-types.

Find out more about O. Smith at these links!