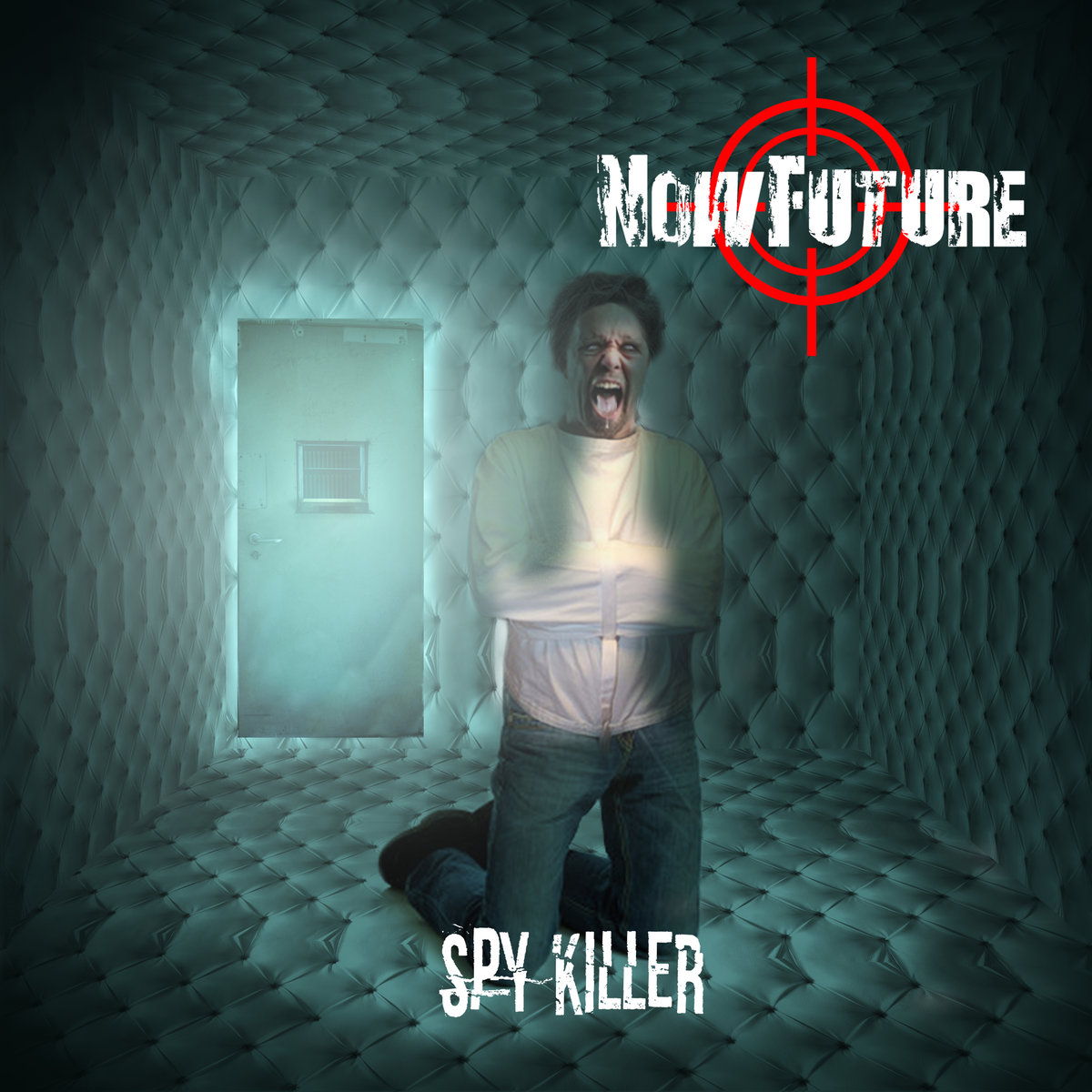 You gotta love the punk-minded musicians out there when you find’em…they’re a clever bunch.  Take for example, NowFuture from Montreal – they know what I’m talking about; they’ve certainly got that classic mix of hard-hitting music alongside the quintessential sarcastic & character-laden attitude that has always filled the genre with the driest of jokes just underneath the surface.  Most of the satire & attitude of punk has always flown right by the average listener…but for those out there that ‘get it’ – you already know these ingredients are essential parts of the formula to create the required chaos in the atmosphere.  I’m telling ya though…NowFuture definitely gets it…you just don’t get names like this in a band without really having a great grip on what punk’s all about – check out the lineup for yourself:

You see what I’m saying?  Either they were born with the perfect names for punk-music or they really ARE a band that gets what the genre is all about at its core.  Of course there’s more to it all than just what’s in a name…but even before listening, you can see this band is already on the right path through not-so-subtle clues like the ol’ punk name-game…it all adds up to the right approach and doing just enough to catch people’s attention or raise an eyebrow without selling out the style of the genre itself.

Like all styles of music, I get exposed to punk on a pretty regular basis.  In general, I’d consider myself to be both inside & outside of the genre…I’m not a punk 24/7 guy – I’m not really an anything-24/7 guy when it comes to one specific style, but more than any other style out there perhaps, I’ve always felt like I’ve gotta be in the right mood to seek it out in my spare time.  I certainly have though…from Black Flag to No Means No, NOFX, Bad Religion and back again, I’ve been in the thick of it all when the mood strikes me and found some of the most powerful, passionate & alive tunes inside of punk music.  The new generation of punk-rock, especially out of Montreal, definitely seems to get what it’s all about – I dig what I’m hearing from NowFuture and I’ve been a raging fan of fellow-locals Oh My Snare! for at least a couple years now…the scene is definitely elbowing itself back into the main mix with authority.

Loved the eeriness in the sound of the opening guitars of “Spy Killer” – and loved the way the bass & drums come in quickly to support and assist in adding the ferocious crunch in the energy and approach NowFuture takes to starting up their new EP.  Pete Moss steps to the microphone sounding 10-feet tall, looming, dangerous, threatening and menacing in his tone – he’s hitting the mark exceptionally well and his band-mates are kicking out the jams behind him at all times to create the intensity in this first tune.  If I had an all-star to choose in this first track however, I’d probably have to give the award to Steph Deriff who comes out leading the charge with killer riffs that are strong & highly memorable.

I felt like the entire band really picked up the energy even further with “Sweet Lovin’ Gone Bad” – these hooks are freakishly sharp!  Vocally, I can’t get enough of the way that Moss has approached each part of this song and the amount of force & energy he’s put into his performance – absolutely nailed it for the most part.  There’s one verse around the 2-minute & thirty-second mark that you can hear a word or two drag to fit the metering…which is usually an indication that you wanna hit-up a quick rewrite to find that extra word or change that leads to the perfect cadence in the lyricism – but aside from that one flash of a moment, the rest is insightfully strong.  The chorus hook itself, vocally, is 100% perfection and really sounds every bit as big & burly as it’s intended to.  Big bonus points to the rhythm section on “Sweet Lovin’ Gone Bad” as well – great definition in Pat Chooly’s bass-lines and the innovative efforts of Alex Treeme’s drums have certainly not gone unnoticed by these ears of mine.  The opening pounding & quickness in the snap of the drums and shouts from Moss get “Sweet Lovin’ Gone Bad” rolling along like it’s designed to be the soundtrack of your getaway just after you rob your first bank.  In other words, this mother MOVES…good chance that this was my favorite track of the four – the cohesive energy and flawless musicianship along with the badass ideas on the vocal-melodies that drive each part get me amped right up.  Built on really strong ideas and played with pure confidence, heavy skill and meaty riffs – “Sweet Lovin’ Gone Bad” is undeniably rad.

“I’m Bad News” sounds lyrically like the title would imply – a tale of menace, chaos and personal vendetta.  With its churning grinding of guitars and straight-to-the-point chorus – if there was a physical form of this song coming your way as you walked home, you’d cross the street for safety!  Solid guitar-work from Deriff keeps the chops coming at ya quickly, but also has him taking the time for some smart additions to the music in layers overtop as well.  “I’m Bad News” is the musical equivalent of the boot on the back of your neck while you’re smooching the pavement on a really bad night…brutally powerful and mightily forceful – this track aims straight for you with no intention of missing its mark.  Love the energy of Moss and the growl, tone and rasp of his voice heading into the final verse of “I’m Bad News” – there’s still just enough hint of melody in his vocals to bring you into the hooks, but at the same time, he never lets off the intensity he puts into his performance or his signature throat-ripping sound.  “I’m Bad News” almost reminds me of something close to like…hmmm…I want to say Probot…Motorhead…that kind of direct, straight punch-to-the-throat, raw & bleeding style/sound of pure aggression coming at you full steam with intent to leave bodies and victims strewn-out by the speakers where the sound was coming from.

I’m just telling you upfront that “I’m Bad News” and the music of NowFuture in general is probably NOT music for your grandma unless she really is indeed as damn cool as the scrawled writing on the stalls of the bathroom walls imply she is.  Just sayin’ – you’ve now been warned…it’d be a really select club of grandmas out there that are cool enough to listen to this, but the rest of you out there should have no problem at all.

In a sense…you can definitely see NowFuture as more of a good thing when it comes to punk-rock…but I can also hear the argument that there’s still work to be done to obtain their full identity.  As far as I can tell, NowFuture is still pretty damn fresh & pretty damn new…so it’s logical to still hear room for the band to grow and evolve as time marches on.  Right now the Spy Killer EP has the band sticking pretty closely to the formula…maybe a bit closer to the ‘rock’ side of punk even at times…and I think over the course of these four songs they’ve certainly proven they’ve got a handle on it all.  “You Betrayed” is a perfect example of what I mean…NowFuture might not be reinventing the punk-rock-wheel here but they are playing the living shit out of the music they’re making – and I think that’s commendable.  As almost any expert in any field would tell you directly – you have to be able to walk before you can run; NowFuture already has a master’s grip on the straight-ahead sound of empowering punk-rock and I’d imagine in the future we’ll get even more insight into what they’re really like creatively.  But yeah – as far as the ideas and execution goes on the Spy Killer EP, there’s certainly nothing to complain about.  “You Betrayed” ends this EP on the confident, bold & bone-crunching energy that got them this far and had you listening intently throughout, wrapping-up a verifiably well-played, structured & assembled record that is full of wild energy & the growling spirit of punk-rock.  NowFuture’s done a solid job on all four of the cuts on Spy Killer and everything I’ve heard sounds unified…like these guys really belong in this band doing what they’re doing now.  That’s the kind of situation where everything a band with this intense of a bond will sound great when it starts, like it does right here on this record…but believe me when I say the potential you’ll hear on the Spy Killer EP indicates they’re going to keep on getting better.

Find out more about NowFuture through their official links below!