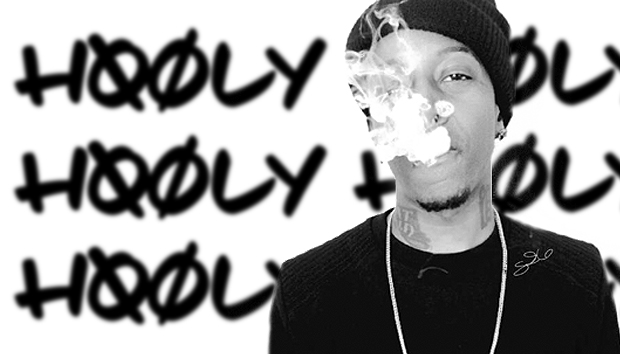 I think it was just a couple weeks back that we latched onto the music of The GOAT – and wouldn’t you know it, the man’s out there stayin’ on his grind with a couple new singles released already, keepin’ that game sharp.  Last time we reviewed his cuts, they came from his recently released Lit Boi record…looks like we’ve got a couple more samples from that record in the four we’re checking out today…but these other two…they seem to be even more recent than those are.  So there you have it emcees – not only is Novel “Hooly” The GOAT consistent in the quality of his music, but he’s clearly ready to get his hustle on & outwork the rest out there that hold the mic.

In this set, Novel starts “Cookin It Up” along with his homie Bino on a menacing cut that sounds large & in-charge from the moment the beat first kicks in and those words start gettin’ spit into the mic.  Lyrically, there’s exceptional contrast…don’t get me wrong, it certainly sounds serious from every possible angle, but there are definitely lines in this track that are gonna make you raise an eyebrow or at the very least make you crack a smile.  Like…I’m not exactly 100% sure…but I’m pretty sure that “Cookin It Up” even includes a verse about how salty balls can get?  So you see where I’m comin’ from – there’s definitely some all-too vivid imagery in the words.  Ha!  While you might not want to sample or imagine their salted nuts – that’s just an example; the point is you can completely see the storyline in your mind and the different scenes described lyrically because the words are damn direct & to the point.  Together they get the energy in this new set started out with immediate impact & quality rhymes.  Novel & Bino are “Cookin It Up” with confidence on this new single; huge low-end sounds looming through the speakers and really wild stuff happening in the background vocals that keep this cut highly entertaining.

The sound of Novel’s music shifts gears and becomes even more intense on “I Got The Juice” – this track seriously hits the mark.  Lyrically complex, Novel’s firing-off at full speed verbally, matching the tension, energy and power in the music with huge doses of precision, attitude and character in his rhymes.  There’s tons to love about this cut – and it starts immediately with the impressive winding down of the very beginning of the song that sounds like a tape slowly melting in the sun before the beat goes on a serious roll and never lets-up from there.  The verses rip by with serious grit, determination and skill – Novel’s sounding more gigantic than ever before…like The GOAT has grown ten-times his size.  Not exactly sure what the mixture of that juice he’s drinkin’ is…but put me down for a cup!  Alright…maybe it’s not exactly about a specific beverage…maybe it’s a lot more about how this emcee is ready to go the distance…that’s probably more accurate.  He makes his presence felt on “I Got The Juice” and sounds more hungry than he ever has before…The GOAT’s feedin’ on souls on this cut y’all and firing shots along the way at targets like Donald Trump and even the Waterboy’s Bobby Boucher as he rolls through complex wordplay that dips into pop-culture references and humor while keeping everything we hear sounding furiously intense and straight-up gripping.  Novel covers the map on this cut…he even teaches his dick to speak Spanish on “I Got The Juice” – even though he’s already proven himself to be The GOAT, it’s inspiring to hear he’s still willing to learn something new at any time ain’t it?  This is a real winner though – no doubt about it…even the breakdown on this cut screams with tension & menace combined.  Novel’s clearly got the juice as he claims here…you might do well to duck & cover before he starts spraying himself all over the nation, starting a chin-village dripping from the faces of those you know & love.

Taking it back to new singles from the Lit Boi record, Novel takes a break from learning his second language to drop some real knowledge bombs of his own on us with “This Right Here.”  Of all the cuts that I’ve heard from “Hooly” so far – I think this cut has the most meat on the bone for us to chew on and helps us get to know the real man behind The GOAT.  As he says himself, ‘this right here’s hot knowledge’ – and the words of wisdom flow from there as he gives a class on hood-philosophy 101.  Class is in session homies – pay attention because a lot of what he’s got to say here isn’t just entertainment so much as it is words to survive & thrive by.  As far as his own performance is concerned, I also think his flow is right at the top of his game here – Novel sounds electric as he bounces off the beat and pulse of the cut perfectly off each and every syllable…he’s pure energy.  He also proves that you don’t need to repeat the same damn word over and over and over again to keep the rhyme-scheme in-check – modern day rappers and trappers out there take note.  Novel keeps the lyrics diverse and wildly entertaining, all the signature wildness in the background adding punch to the words as he spits a super-charged set of vocals into the m-i-c.  The GOAT doesn’t just sound like a strong part of the movement for social-change here, he sounds like a general ready to command an entire army, ready to charge straight outta the hood and onward to take over the capitol and bring the streets back to the people where they belong.  He keeps the words incredibly real and relatable…”This Right Here” is an empowering track that translates The GOAT’s energy right into your own…you’ll feel like you can go out and conquer the world yourself with this turned up on the soundtrack of your own grind.

In a more personal & vulnerable moment…Novel becomes more reflective in this final track of the review today, called “Still Love Me.”  Definitely another key tune in terms of getting to know the man behind The GOAT – Novel once again finds an insightful way to match the energy of his rhymes to the atmosphere in the music.  Wondering aloud about what it’s gonna take to keep the admiration of the people…what he might/might-not do that’ll keep the listeners on his side.  It’s a great track to examine this kind of theme when you factor in just how different the style of the sound is as well; he’s switching it up dramatically here from the rest of what we’ve heard from “Hooly” so far – still love him?  I’d imagine you probably do…he’s given you every reason to over another wickedly entertaining set of four, with two new singles that sound like he’s yet again switching up his style to keep his music innovative, unique and always heading towards that next-level.  “Still Love Me” shows The GOAT in a different light – and I think people appreciate real definition like this in an artist.  Even though he’s questioning his own moves somewhat throughout the lyrics of “Still Love Me” – overall he makes precise decisions with his art, music & career that lead to maximum entertainment; and even through more chilled-out & low-key moments like this track, your ears still follow along captivated as they listen to an emcee in full-control.

Find out more about Novel “Hooly” The GOAT at his official homepage at:  www.hoolymusic.com