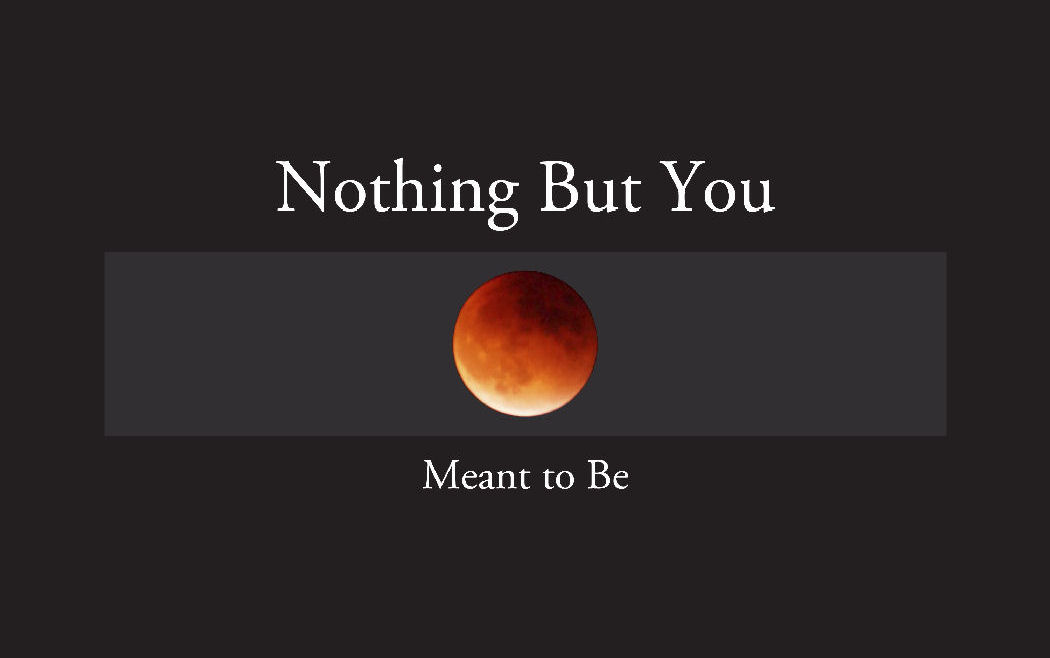 Nothing But You – Meant To Be – Album Review

While it’s easy for me to admit that show-tunes, lounge, dramatic & theatrical performances generally aren’t something that connect with me – it’s also easy for me to admit that I was all smiles while listening to the sincerity and genuine passion in the music from San Francisco-based project Nothing But You.  I had points throughout listening to the new record Meant To Be and the covers of classic tunes that I’d normally never listen to, where I had to stop everything I was doing to just sit, listen and admire these performers for creating something entirely beautiful to listen to & experience.

With an announcement of the project’s name in a quick intro repeating ‘Nothing But You’ hypnotically from the lefts & rights of the speakers on “Let’s Get Started” – it sets the tone of the atmospheres to follow and presents a sincerity of emotion right off the bat.  You can hear even in the short opening intro to Meant To Be that the commitment to giving their hearts to this record has already been established…and over the course of the eleven songs to follow, all involved do a fantastic job of bringing these ideas to life.  I can tell you with certainty that what you’ll hear convincingly sounds like love, peace, harmony & unity all definitely in the air.  You get the slightest hint of what Nothing But You’s centerpiece & feature-star Nicky will bring to the mic…she’s in a near whisper here on “Let’s Get Started” compared to some of the powerful notes she’ll hit throughout this album.  In addition, you also get the stunning talents of pianist Shota Osabe and gorgeous piano tones right away in this first tune – and going on to put resounding emotion on display even further through the beautiful solo on “Lost Without Your Love” to follow.

Without being intensely familiar with every song title on the list, the fact that many of these were classic-theatricals, Broadway melodies and show-tunes of sorts was lost on me at first.  As “Lost Without Your Love” began, I was unsure if Nicky was over-singing the song…there are moments where the dramatic delivery sounds so committed to performance that it almost came out over the top; but eventually, the tone and approach of what she brings to her soulful sound makes much more sense as the playlist continues on and Meant To Be sticks cohesively to its ambitions, sentiment & ideas.  The earlier tunes like “Lost Without Your Love” and “Misty” both had moments where I was questioning the performances at moments until I realized that the theatrical-side of Nothing But You’s music is a part of the recipe to their own signature magic…and gradually, I accepted these songs more and more.  I still think there are a few questionable moments in “Lost Without Your Love” and in “Misty” as well as far as Nicky’s vocals are concerned…but nothing off-putting, just stylistic choices that you may/may-not accept on those first listens through.  Sometimes the break in her voice is the perfect addition…at others it’s right on the fence for its tone on “Lost Without Your Love” – but with the beauty in Shota’s piano backing her up…really everything we hear becomes acceptable to our ears.  That dramatic and theatrical approach that Nicky uses is built into the fabric of the writing in these cover songs…and in that sense, she’s doing these first two songs tremendous justice with confident and committed performances.  Progressively, I felt like “Misty” already began to show an improvement on what we heard from her in the first two songs as she begins to let her voice truly soar & highlight the impressive range of her vocals – but it was after this point on the record that I thought this project really started to shine even more.

“My Foolish Heart” was where things started to change for me…where I really started to appreciate the sincerity in the music of Nothing But You on their Tony Bennett cover.  I think it’s also the last song where you might question Nicky’s choices; I could understand some people thinking she’s right at the edge of her tone & range to hit the high-parts…but from what I’ve gathered throughout her performances on these tunes, she’s putting in a determined effort to let the art of the writing shine through her mood, attitude and tone.  So while it could be argued from a technical standpoint at times that it still sounds a little raw – I think what we trade for rounded, polished edges here on “My Foolish Heart” help bring out the honest sincerity of the intentions behind the writing of this cover tune.  That’s always a deal I’m willing to make…and I think you get a lot of Nicky’s genuine emotion through the way she approaches her vocals here.

Shota’s piano-playing has been spot-on throughout everything I’ve heard so far and has been incredibly reliable for Nicky, who in-turn as a result really gets to explore entertainment, performance, character & attitude within these songs they play together.  “New York State Of Mind” is a fantastic example of this project at its best with bold confident tones and beautiful notes twinkling from the piano while Nicky puts a highlight display of some of her most powerful vocals we’ve heard so far on the record.  Quite often that can be a result of knowing the material inside & out…could be a cover that she knows really, really well – but I think you also hear the quality of her performances rise again right around here on the album.  She hits the mark with real grace and power on “New York State Of Mind” and with a perfect mix of soulful & sweet on “Cry Me A River” right after – Nicky has raised-up the standards in the middle of this album and really become a force of expression to be reckoned with in these songs back-to-back.  Another exceptional job of creating a beautiful combination of art & music combined – “Cry Me A River” is a massive highlight on Meant To Be and certainly a worthy cover version with its own validity.

Switching it up to sweetened tones of guitar from Jerry Stucker for the emotional melody of Leon Russell’s “A Song For You” – this was another highlight for me; and another tune that had shown me how much I’ve come to accept the dramatic & theatrical, artistic approach that Nicky brings to the vocals.  It’s almost similar to acting in the way she delivers the material – but the sincere connection she has to the songs and the passion she brings to her performances makes it all more real than mere acting.  You can tell Nicky both loves & lives this material, and was born with a song to sing & share with the world.  “A Song For You” showcases an artist that’s right in the moment…committed to the song & really making it her own.  I felt much the same about Eric Carmen’s “All By Myself” and Nothing But You’s cover version; a great performance from Nicky leads the way to captivating moments that capture the essence of the emotion – and a real highlight for Shota’s piano-playing.  As the song progresses, you really get to hear Shota putting fantastic emotion & expression in the music, increasingly right up to its very end.

It is definitely chilled-out music overall…the tempo itself always stays very low-key and moves slowly, gently and tenderly.  “Feel Like Making Love” is another great example of their use of space & pacing…excellent keyboards lead the melody and a versatile performance from Nicky on the microphone.  Proving they’re every bit as effective in expressing themselves at their most relaxing…”Feel Like Making Love” succeeds with its warm, invitational tones and love-filled sentiment.  If anything…while the similar energy you’ll find throughout the album is certainly cohesive, it’s so relaxing and dreamy at times, that were it not for the dramatic nature and character in Nicky’s vocals they’d risk potentially losing people by almost relaxing their mind, body & soul too much by this point in the record.  But – again, for people looking for an atmosphere, mood and set of songs that really explore that kind of soft, smooth & gentle terrain in music, you’ll appreciate that Nothing But You won’t break that energy or take you outside of the sweet confines of the tender styles throughout their song set.

“The Very Thought Of You” has a unique music-box style sound to its opening which I liked a lot…I also liked the return of the classic piano sounds from Shota…good ol’ reliable Shota deserves a lot of credit for the stunning atmospheres we’ve been hearing, and sounds excellent once again here on this tune.  At times I really thought Nicky’s vocals really found the rise & fall of the music and had perfect energy to match…and there were a few spots in here where I felt like a little less emphasis on ‘performance’ and more focus on the melody itself might lead to better results.  Again, it’s all stylistic choices and carries the signature expressive-essence of Nothing But You and how Nicky chooses to sound or sing her parts; for some it’ll work wonderfully…others might be looking for a slightly more scaled-back approach here.  But that’s not really what Nicky is all about…she’s all confidence, heart and raw passion on display;  especially parts like around 3:45 on “The Very Thought Of You” – when she hits those rising tones, it lifts everything else up surrounding it and accentuates the melody in really empowering & uplifting ways.  Excellent piano solo from in the mid-section of this track as well…another highlight worth the mention.

It felt like the album was drawing to close with the opening piano tones of “As Time Goes By,” and as the record’s second to last tune…I suppose that it’s only natural that they hint it’s almost time to draw the curtain.  Excellent intricate parts in Shota’s piano playing here on this track…many bold & confident tones from Nicky as they begin to send us into dreamland towards the end of the album.  A big finish from Nicky brings this one to a final conclusion…and then they truly do send you towards the sandman with the final song “Dream.”

And I mean that in the best of ways – “Dream” would arguably be my favorite song on the entire album for me personally.  Everything about this final track seemed to really snap into place perfectly and the overall sound is entirely inspiring.  Nicky sounds at her most magical…Shota Osabe the ever-reliable pianist displays a mastery of creativity, subtly & complexity all at the same time; and together, they’ve made a beautiful finale for this album that is highly memorable and sincerely impressive.  Something about this last track really brought back the themes in the sentiment and intentions that drive this sweet project to make its music and share it with the world…and I absolutely loved that it ended this way.  A great reminder of the amount of heart & soul that they put into their music along the way, and a true highlight of what Nothing But You sounds like at their most focused – I think they ended Meant To Be on its sweetest of notes with “Dream” and finished the listening experience with true grace, beauty & style.

Find out more about Nothing But You at their official pages below!

Tags: Album Meant To Be Nothing But You sleepingbagstudios