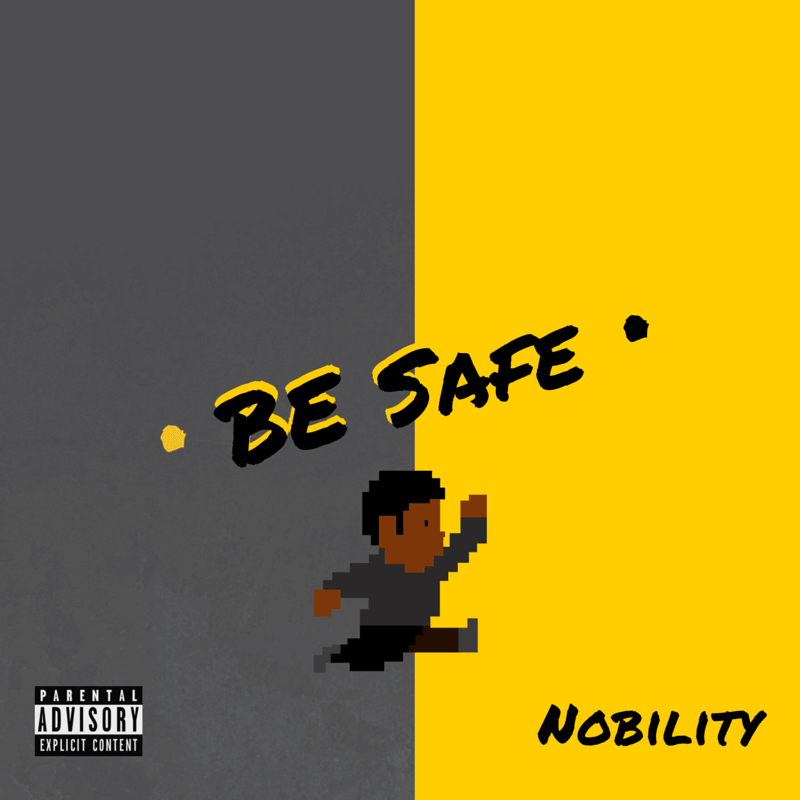 Man (and by man I mean y’all) – I have been looking forward to hearing more from Nobility since we last reviewed his rap-music on the album State Of Mind sometime over a year ago now I figure. This emcee possessed deadly skills and a virtually unmatchable flow – and it’s comforting to see some things never change. Not only is Nobility back – the music is more creative and innovative than ever, lyrically sharp as fuck and packing the parental warning & cautionary signs right on its front cover on proud display. This ain’t music for do-nothing bitches…this much I know.

Be Safe gets GRIMEY and quick! The opening track “NERD” is murdered right out…it sounds like the audible form of an automobile painted flat-black with illegally tinted windows; only thing is – you better be driving a pretty sweet ride with a wicked stereo to give this song the low-end it needs. And of course, once you’ve got it there you’ve got your windows to worry about – the sonic force and massive bass-tones pound with authority as Nobility flows from the moment he starts up until just before the end of the track. Who needs that oxygen stuff anyhow? Clearly Nobility doesn’t.

The album continually grinds out interesting track after track. While “Grow Up” might almost sound too easy for Nobility at first – wait until he switches it up just before a minute in to go on a massive stroll through the dictionary for a wickedly tight verse that’s guaranteed to make you crack a smile through its humour and nod your head in approval of the delivery & performance. Switching gears like Nobility does…believe me…these aren’t talents just any emcee possesses – this guy is consistently exceptional.

But let’s suppose for a second that you DON’T believe me – you just go right ahead and continue Be Safe with the following cut “BANG” – and get back to me after you pick your jaw up off the ground. First off – this beat is so damn unique, complex, well-made & well-mixed that it would send half the emcees in America running for the woods to hide in fear that someone might ask them to make something of it. Our hero Nobility proves exactly why he’s one of the most ground-breaking rappers on the scene today with a track like “BANG” – not only is the music HUGE, his performance puts manages to put this gigantic beat in the shadow and he remains the charismatic center of this audio-universe. Seriously – turn this song UP – it’s completely unexpected and unlike most anything you’ll hear in rap; the skill of this producer/performer radiates from the speakers…the people out there should know the name Nobility and other emcees should sharpen their game if they’re going to try to keep up to him somehow.

I dig the opening sequence of “Wonderlust” but I wasn’t quite as sure about this track as I have been about the first three tunes before it. I like & appreciate that it does something new…and the beat itself is something I dig quite a bit – it’s beyond complex and completely entertaining. To be completely honest I think there were just parts of this flow that didn’t quite gel for me within the atmosphere of the beat…well…that is until the beat changes with just around a minute to go and things seemed to fit more solidly into place. The rap retains its style, confident delivery and precision…just hooks that are harder to grasp and not as accessible as some of the rest on Be Safe.

Heading back into the murk – “Austen Powers” is built around a menacingly-serious minimalist vibe. Nobility is extremely effective in audibly-dangerous moments like this, the grit and attitude in his flow always match the tone & dank atmospheres just a little more than some of the lighter-tracks like “Superhero” to follow. He’s great in either vibe, but something about his style and tone really mix well with mayhem, menace & mischief in the music. “Austen Powers” is as massive as a skyscraper – this beat looms over you and puts you right into the shadows no matter where you’re standing or where the hell the sun is. I found myself admiring the mix on the beat of “Superhero” and the way that Nobility kind of wanders through a stream of consciousness and free-style feeling on this track. It may or may not be…but it comes over the mic poetically, passionate and as I mentioned, it lightens up the music in tone even if the lyrics aren’t always necessarily on the sunny-side of life. Nobility writes about the real…the real gets gritty almost always more often than not…his rhymes reflect the struggle but also the attitude of a guy that’s never giving up – “Superhero” really puts all that on full display.

I was almost surprised to hear the complex nature of the title-track and final-cut “Be Safe” – but I knew I shouldn’t be. Nobility has always been about challenging what we think, what we hear, and staying true to what’s important to him as an artist to communicate – so when “Be Safe” and its all-out bizarre beat starts to trip out of the speakers…I feel like I should have somehow been expecting it more.

But you see…that’s just the thing about clever minds like Nobility’s – you can expected the unexpected, and nothing more. An innovative artist isn’t going to take you for a handheld stroll down the memory-lane of music – no – artists like Nobility are here to leave their mark by blazing new trails so deep they’ll become a natural path for many of us. I’ve been a fan since we first experienced the music and skills of Nobility over a year ago – this time out here on Be Safe is complete confirmation of his innovative ways, complex rhymes and intense-music if you ask me. Another album full of BIG sounds and big ambition – but this artist continually proves that if you put everything you’ve got into your craft – the rewards can be golden – they certainly are here on Be Safe.