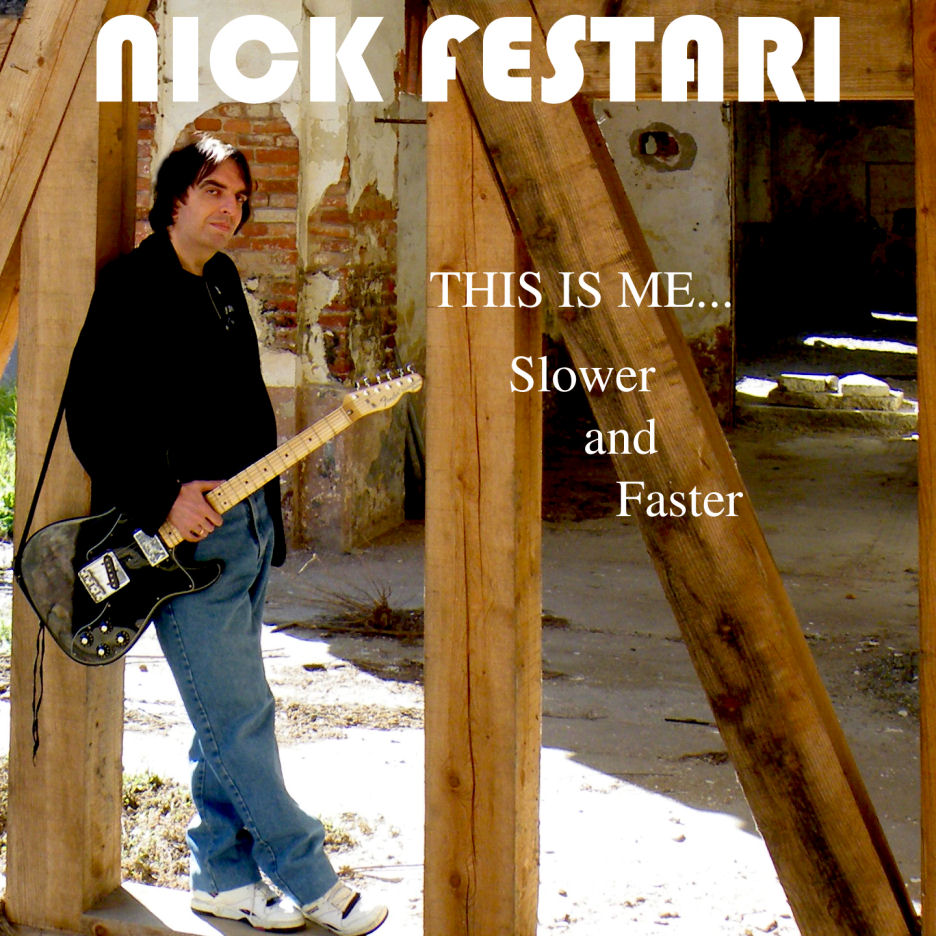 Nick Festari – This Is Me…Slower And Faster – Album Review

Alrighty Nick…I’ve read enough about you before listening to the music to know you’ve written close to 1000 songs (literally!) and that you’ve been making music in general for somewhere around 30 years. Finding a connection to sound at a young age as well – you started into all this before you were even ten years old! That’s quite the set-up…I mean I’d be lying if I said that everything I’ve read hasn’t raised up the expectations surrounding the music…a lifetime of passion, hard-work & effort has been put in to perfecting his craft.

But wait! Stop the press! It isn’t quite that simple. After spending nearly his entire career with music in the Eurobeat/Dance circuit, successfully entertaining audiences and people for years in a defined style – it seems that we’d be being a little harsh to raise expectations straight up to the rafters just yet; Nick has recorded This Is Me…Slower And Faster in genres he’s less familiar with. SPOILER ALERT – a great song-writer will transfer themselves from style-to-style, genre-to-genre and adapt with the greatest of ease…and I fully expect you’ll find that over the course of these six songs you’ll find that Nick has had no trouble at all finding his way in his new sound. And besides…thirty years is a long time to go without challenging yourself in a brand-new set of directions; I think he’s made a bold move, but a very smart move by starting this new journey and seeking new sounds. I’ve said it countless times…as much as we might all have those moments where we might wish that our favourite artist or band made more of the music we loved the last time they made a record – but they have EVERY right to change and our expectations are simply that – our own. To want to take every path and venture down every avenue music has to offer SHOULD be a natural inclination in every musician…and to some degree I’m sure it IS – but it’s much more awesome to see and hear it put into practice like Nick Festari is doing on This Is Me…Slower And Faster. Pass or fail on any of the material to be discussed…the fact remains the same: this man’s got my respect for taking on an entirely new chapter in his career and having the courage to commit to doing something radically different than what he’s done in the past.

So. I guess there’s only one thing really left to find out then eh? Let’s talk some music!

What I got from these six tracks after listening was that they could have quite possibly been recorded sequentially, in the order they are…let me explain… As it starts out with “You Wanna Make Me Fly (I Know You Belong To A Dream)” you can hear that Nick has yet to quite drop the safety-net of the world he once knew entirely…the wild electrobeat infused into this track certainly suggests that danceable vibe from where he’s come from throughout his career. That being said, there is much more going on than just the electrified beat…there’s inventive guitars and some truly impressive harmonies coinciding with the large dynamics in this opening tune. You can hear a little of the auto-tuner firing away in the vocals…and like many people that use it audibly, it plays to his advantage for a large portion of the song and of course, slightly varies itself just a little outside of fully-controlled as it tends to do. I would go on to feel the same way about “Wings Of An Angel” as far as those vocals are concerned; don’t get me wrong – I’m actually a big fan of the auto-tuned sound on a vocalist…but man is that one tough-mother to get nailed 100% when it wants to naturally take your voice for an unpredictable wander all over the studio-map.

Whatever…like I was saying…those slight variations are minimal to begin with, and also something our ears accept when it comes to auto-tune, just like our eyes accept slight flaws in video when we watch something online streaming…no one’s gonna really notice when the songs themselves come out as energetic, bright and charming as they are. Nick hasn’t let me down in this department whatsoever…not that he has in any others either…but this guy can really write a killer song. I remember looking up to see which one of the tunes kept making me feel that way and I kinda had to laugh…it was called “The Song I Wrote For You.” Up until that point, I wasn’t sure he even knew I was here listening – now I look up to see he’s even written a song for me specifically? Thanks Nick – you rock!

Okay…perhaps the truth in the matter is that it’s probably not written for ME directly…but it IS for YOU. In a blazing combination of electro-pop/rock, this song has an intensity and energy to it…an enthusiasm X10 of that you’ll have already found on this album. I believe they call that ‘stepping it up’ – and Nick DOES just that from the moment This Is Me…Slower And Faster starts to weave its playable magic. But again…true song-writer here on display – this song could work for everyone from Keane to Fallout Boy to Katy Perry or Lady Gaga…and it certainly has a MASSIVE summer sound. Nick delivers the vocals with a perfectly matched energy and really takes hold of this song with a firm grip on the tone.

Taking the inspiration & enthusiasm into “Don’t Throw The Dice,” the lyrics also back his intentions to make the most of this change in direction and really take charge of his career. Still a somewhat cautionary tale to make sure you don’t gamble too much with your heart & dreams…what I liked about this song the most was that Nick found himself inching closer and closer to the edge of that spotlight until he fully owned it. This song has a theatrical & dramatic flair to it that performers like Mika or the great Freddie Mercury would love to go after with their full commitment – and you can hear that Nick Festari could fit right in there with this high-caliber crowd. There are a ton of brilliant ideas in this song from the addition of strings to the absolutely stunning melody itself in the opening minute-thirty which somehow cleverly adapts and finds its way into the rock-infused music to follow. A real explosion of energy and pop/rock harmony, “Don’t Throw The Dice” might even remind our locals here in BC of another artist we all know well here, Todd Kerns. Similar to the vibe he put out in Static In Stereo or the more pop-infused songs of Age Of Electric – I dunno…I can’t help but dig the brightened, uplifting energy in a rock song like this, it sounds fantastic.

My favourite performance from Festari might actually be in “There Will Be No Prize,” where the man completely transcends right through the auto-tune to deliver the sincerity, passion and emotion that the vocals needed for this storming electro-pop tune. He attacks this one with an entirely ferocious gear yet to be displayed on This Is Me…Slower And Faster and really captivates with his performance. You see what I’ve been telling you – this whole shebang just continually becomes more and more engaging as it plays throughout; it’s a fantastically diverse yet cohesive set of six songs.

Even at the end of the album, “Don’t Slam The Radio” seems like a logical conclusion of sound for this record, though the overall sound is a larger departure to another direction than any of the rest. Piano-led and melodically-inclined throughout, this last track showcases the versatility of this artist who apparently DOES have that good fortune & skillset to just go right ahead and succeed in any direction he wants to take his music. Must be NICE to have it all coming together so well all the time!

And it really does all reach that culmination, that pinnacle, that mountain top right here in this final tune. I really like the added layer of seriousness that somehow surrounds this final tune…the melody Nick weaves in through the vocals in this song, the way he does the harmonies…I mean…c’mon people – this guy just found a way to completely entertain these ears throughout every second of these six songs. “Don’t Slam The Radio” really pours on an extra degree of emotion and feels like a struggle that Nick has personally triumphed over…I think he’s nailed it here in this final dramatic ending and proven to himself that he can indeed conquer anything he sets his mind & microphones towards.

Great mix of sounds, style, production and performance on This Is Me…Slower And Faster. Nick has done himself proud here if you were to ask me…and now that his creativity and writing have taken him to entirely new places in music, I wouldn’t be the least bit surprised to find this hard-working artist has become completely addicted to that feeling. I can only imagine what he’ll come up with next!

Whatever it is…I want to hear it!

Tags: Album Nick Festari sleepingbagstudios This Is Me...Slower And Faster