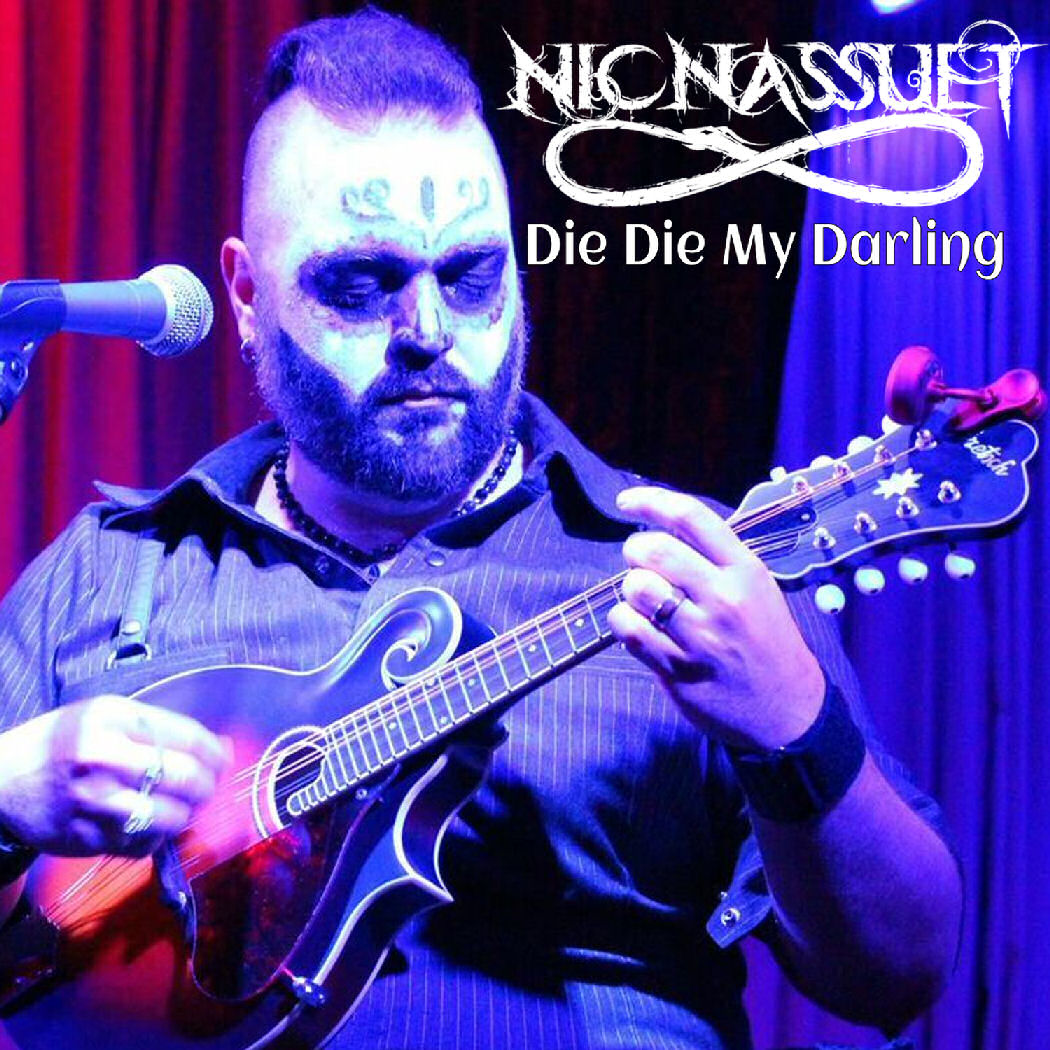 Nic always has me learning just as much as listening…I dig that.

His latest effort, the new award-winning single “Die Die My Darling” is a cover of the underground punk band The Misfits…many of you out there already know these giants of the genre well.  What you may/may-not know, that ties directly into what Nic has been working on for a while now…is that Glenn Danzig was an original member of The Misfits.  That’s more than likely a refresher-course at best for most people familiar with the 80’s punk-scene…that being said, explaining what a ‘Danzig’ even is to a millennial would likely prove to be a tough-ass challenge.

For example…check out this brilliant comment from the original posting of The Misfits “Die Die My Darling” from some dude on YouTube:  “Is the band in the same room as the microphone?”  That pretty much says a lot about what you need to know if you’re unfamiliar with the original.  It’s thrashing, gnarly, gritty and grainy in its production & sound…and comes out just like it’s intended to – taking no prisoners and giving no fucks.  Also an interesting side-note, in the world according to Wiki – The Misfits broke up more or less about six months prior to the release of “Die Die My Darling” and the Earth A.D. record – only their second official album and sixth single released.  Danzig stuck by his work and the effort they all put in…ended up releasing the album on his own label (Plan 9 Records)…and I suppose the rest, as they say, is history.

As musicians looking back at our lives, music and career…one could only hope that after the years gone by, we might have our own Nic Nassuet out there somewhere, painstakingly but joyfully recreating the history of our work.  For those out there unfamiliar with Nic, he’s a multi-musical talent with all kinds of professional experience from the theatre to the studio – and he’s also been working on an entire EP full of covers called Torment – An Acoustic Tribute To Danzig.  Last time we checked out his music was about September last year when the singles began to first start rolling out at the end of 2016 with his stunning version of “How The Gods Kill” by Danzig.  As far as I understand it, both that single and the new one “Die Die My Darling” will be found on the EP as well as two songs from Samhain, (Danzig’s band immediately following the breakup of The Misfits) another tune from The Misfits for two in total, and a solo Danzig tune, presumably “How The Gods Kill.”  5 cuts…all from throughout Danzig’s history…and all from an entirely new perspective with a whole new sound, courtesy of Nic Nassuet’s recreations.

As far as the new single is concerned, Nic is once again on his game and clever as ever in his adaptation of “Die Die My Darling” into his own style/sound, specifically going the acoustic route for this EP of covers coming up.  It’s already picked up two awards at the 2017 Indie Music Channel Awards and has been racking up thousands of hits since its release only less than a week ago – fans and critics alike are already catching onto what Nic’s doing and digging it without question.  Even myself…admittedly not Danzig’s number-one fan as I’ve mentioned previously…even I’ve been able to find multiple things to appreciate about what Nassuet’s bringing out in Danzig’s music through his covers and feel like I’ve been able to hear the real essence of what makes the songwriting great through Nic’s own passion, perspective and enthusiasm for it all.

Even though behind the scenes you can tell Nic has been excited about the music and potential of his upcoming EP, he never breaks character when it comes to the actual sound of the melancholy music itself and the serious nature surrounding the atmosphere of Danzig’s songs.  When you notice the track length of nearly five-minutes for “Die Die My Darling” – you’ll come to the same conclusion we all do:  5 minutes?  That’s not punk!  And no – it’s not anymore.  Through Nic’s careful adaptation, he’s expanded the original song by nearly two full minutes, slowed it down, made it acoustic…kept its darkness, kept its heavy shroud of mystique…but also made it extraordinarily beautiful by comparison.  A definite fit with the acoustic rendition of “How The Gods Kill” – I can hear how those two songs would already make an impact between them on the people out there when the EP comes out officially…they’ll respond to the artistically-inclined cover-versions and appreciate the amount of respect Nic has for the originals.  Even though a song like “Die Die My Darling” comes out sounding like the original’s polar-opposite in energy – the main ‘meat’ of the song is still there…the emotion comes through like it wasn’t able to before in its relentless punk & lo-fi sound.  Now we’ve got the crystal clarity to hear the strength of the songwriting and stunning musicianship breaking through to the top with how Nic’s approached this song…and honestly Danzig should be picking up the phone and thanking him for the effort.  You really get to HEAR this song in a way never possible before…Nassuet adds the depth & dimension that a song like this truly needs.  Recognizing a track will work for you in your own style or how you might want to cover it when it sounds so entirely different in its original form is a skill unto itself – you have to give Nic real credit for being able to hear from a mile away how well these originals will work when filtered through his own ideas & sound.  As on-point, precise and satisfying as ever – the production and performance of “Die Die My Darling” once again proves how focused & committed he is to this upcoming project/EP – but also confirms the confidence and courage it would take to pursue it all.  Nic’s putting himself out there by covering what is certainly sacred material and music for many people out there…to come back with as many accolades and high-fives as he already has for his work is a true compliment to what he’s doing.  As far as the originals go…I’ve largely been indifferent…but as far as the covers that Nic creates – I’m listening enthusiastically.

Because you see…there are cover songs that DO something and there are those that try to simply recreate the original; and I’m certainly a fan of one and not the other.  If you’re going to take something on – BRING something to it…to me, that’s what makes Nic’s music so magical…because he truly does.  What he’s done on “Die Die My Darling” shows that you can still evolve a song beyond its original idea…and that years later in cover-form it still has plenty to offer.  It proves that a good cover still requires actual writing…focus…and of course, the skill to pull it all off with the confidence it deserves.  Nic Nassuet continues to showcase all the aspects of a musician that truly cares about the music he makes…even if he didn’t write it himself originally, he’s put so much work into the covers that these songs really do become his own, because they are so entirely different in their composition and sound.  “Die Die My Darling” is another solid reason to be excited about his upcoming EP; he’s clearly putting every ounce of his focus into creating stunning atmospheres that really bring out the best of Danzig’s lyricism, atmosphere and moods…perhaps even more-so than the original author himself was able to achieve.  Bottom line is you get a satisfying, all-new experience through Nassuet’s covers each and every time…he’s put in the hard work to make them truly stand out and I think that effort will really pay off for him with the upcoming release & public response to his EP, Torment – An Acoustic Tribute To Danzig.

Find out more about Nic Nassuet at his official homepage:  https://www.nicnassuet.com/