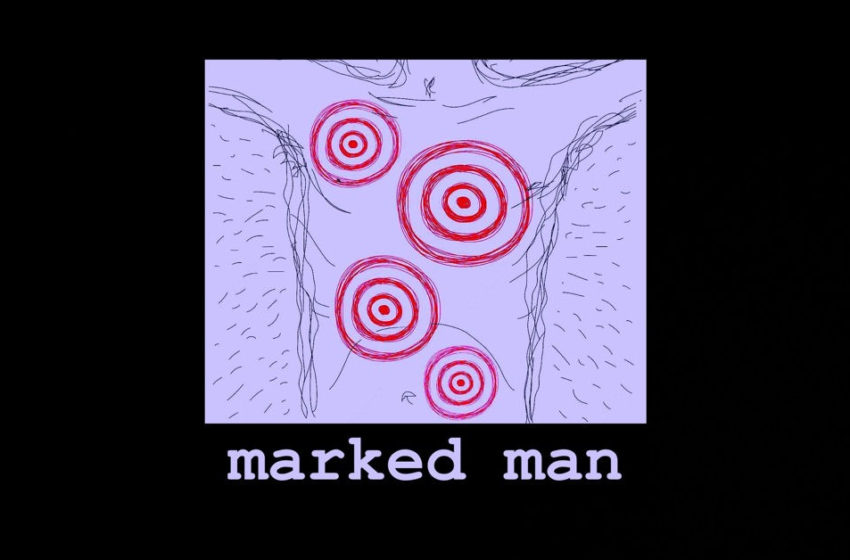 Gary Blake is definitely having his most productive year to-date in his project Neon Radiation, no doubt about that.  With the sheer amount of singles, songs, and records he’s put out in 2019, I can’t imagine that anyone following along with his music would even dare to think about questioning his work-ethic.  And believe me when I say, I’m not gonna be the one to start that trend anytime soon – I think it’s truly inspiring and a privilege to witness an artist, band, or project in full bloom.  Essentially, there are not too many people out there that I feel could put my own output or work-ethic to shame by comparison; but my hat’s off to Mr. Blake – the man works around the clock tirelessly, relentlessly inspired to create art.

He’s firing-up the machine one last time before the end of the year with the release of the lead-single “Marked Man” from the new Neon Radiation EP – it’ll be available as of Friday the 13th in December.  And then I assume weekly or bi-weekly after that for the other three songs on the EP, carrying the momentum and music right on over into 2020…or maybe the whole thing comes out for your Xmas present this year.  I can only speculate…all I can tell ya for sure is, keep your eyes on Neon Radiation over the course of December…great things are happening in this band, and you’ll wanna be the first to know when brand-new tunes hit the net.  There’s always something awesome happening in this project.

The lead-single/title-track “Marked Man” starts this latest endeavor by Neon Radiation.  Credit where credit is due, musically, this cut certainly has it all goin’ on in all the right ways – you can feel the hold the music of “Marked Man” takes on you instantly.  There’s value in that for sure; I’ll admit, what makes this particular track a single isn’t so much any one hook, it’s the high-level of interesting sound and structure at work here.  The performances are solid as ever, no issues there – I dig the vocals and the lyrics suit the vibe really well – but I’d by lyin’ to ya by omission if I didn’t say it was the music itself that really pulls you right into this song.  How Neon Radiation generates such a magnificent & mysterious, fully engaging sound right from the drop of moment one certainly speaks volumes about the strengths in this project overall.  The female vocals are a solid fit…it’s almost as if you could imagine this cut become Neon Radiation’s own version of a Bond theme…like if Garbage could get away with the lackluster “The World Is Not Enough,” then surely the new No Time To Die could benefit much more by having a song that’s actually compelling like “Marked Man” is, don’t ya think?  PLUS…we already know from past experience that Gary thinks about places where his music will fit – we’ve got the evidence right there in his last single “Not Today,” which was inspired by the resurgence of the Top Gun franchise.  Ultimately if you look at the playbook of music-history throughout the years, you’ll find the lead-single serves as an appetizer to begin with when it comes to most artists/bands out there; nine times out of ten you’ll find there are even more appealing songs to follow and I’d argue that’s the case here.  While a new Neon Radiation tune is something I’m forever gonna look forward to I’m sure – I’d probably be able to make a case for each of the songs on this set-list building the overall strength of the EP track-after-track.  “Marked Man” is definitely a solid opening track and has a master’s grip on the atmosphere & air of mystery when it comes right down to it, and there’s no question about its appeal to the masses…people will dig on this.

I’m ahead of the game a bit in this review with the songs not due to start rolling out for at least a week from now…which gives Gary the time he needs to bring the volume of “Cracks” in-line with “Marked Man” beforehand, because there is definitely a noticeable drop between tracks one & two right now.  I also happen to think this second cut is a stronger track overall…maybe that’s why I’ve mentioned the volume – “Cracks” should have every advantage possible on its way into your ears.  To an extent, you can almost imagine a song like “Cracks” sounding like what you’d imagine the band Lipps Inc. doing today if they were still active…this cut has that retro-style catchiness.  Not a doubt in my mind that it’s a stronger track than the lead-single is – that’s pretty much a standard rule of any album out there; you’re always bound to find material beyond the gateway into a record that’s even more substantial.  That being said, never underestimate the power of placement…like I was saying earlier on, if a track like “Marked Man” found its way onto the new Bond movie soundtrack, there’s no doubt it would reach all kinds of ears that a song like “Cracks” might not.  Conversely, a song like “Cracks” is already designed to reach a widespread audience without any additional help like the lift of a soundtrack would provide.  Performances are perfection here once again…like I said, it needs a slight bump in volume to be aligned with the rest of the cuts on the EP, but that’s a problem quickly solved for a master of the studio boards like Gary Blake is.  By the time the record officially comes out, these comments on adjustments will be fully irrelevant I’m sure; bottom line is, I think you’ll already find the degree of accessibility raises with the inclusion of “Cracks” – it’s bright & dreamy sound is immaculately cool and the hooks hit the mark.

“Stranger Moogs” – a title that any true synth-fan would love to see…you know how attached they are to their Moogs.  Taking this track on instrumentally, you can feel the theme & mood of a song like this one surround you quickly with a perfect mix of haunting sound as it begins, exposing a bright melody to lighten-up the vibe as the song plays on.  I think this was a fantastic inclusion on this EP that shows just how well Blake is able to manipulate, move, shift, and transition between entire worlds of sound at will.  While it sounds like there are probably a couple vocal-samples in the mix here (which admittedly, could just be extremely rad drum sounds), they’re used as effectively as any of the instrumentation & programming you’ll find, putting on a full display of what Neon Radiation is able to achieve without really using a word at all.  “Stranger Moogs” has got the groove goin’ on though, big time.  Completely solid cut with plenty of audible dynamics present through the dramatic shift in the mood and sound of the main parts of “Stranger Moogs” – it’s the sheer amount of slickness in contrast that keeps this track wildly engaging and highly entertaining to experience.  This is what you’re looking for in an instrumental situation though, make no mistake…you want a song that essentially tells a story to your ears in some way, shape, or form – and that’s entirely what this does from its odd, slightly cold & creepy sound at the beginning and how it switches up the vibe so brilliantly into something so much warmer and energetic as “Stranger Moogs” transitions.  Fantastic programming at work on this song leads to a mesmerizing structure that is at times hypnotic & fascinating to listen to, and at others, welcoming & purely stunning.

Then there’s the final track…”Christmas Kiss.”  It feels…*gulp…Christmassy.  If you’ve ever read one of my Xmas reviews from the past years…you know most if not all of my thoughts on the entire concept of holiday music already…and feel free to call me the Grinch if you like, I’m more than fine with that.  What I will tell ya though, is that I think it’s either the lack of Christmas music that has come my way since I’ve been so clear about my stance against it, or the fact that Neon Radiation has genuinely put together something sweet that busts through the stigma…one of these two things have led me to actually enjoy this song.  Like I can feel the whole ‘heart grow three sizes’ thing happening to me here in listening to “Christmas Kiss” – so maybe there’s some hope for me after all.  To me, this final track might reveal the greatest of strengths inside of the Neon Radiation sound because of all this…I’m nearly impenetrable when it comes to Christmas songs, and I’m genuinely impressed by this.  You could get a cavity from the sweetness you’ll find here…so consider yourselves warned about that – but facts are facts, this completely works.  Switching up the lead vocals to a male voice was a good move at the end; I think all the performances on this EP from the microphone have held their own, but “Christmas Kiss” really does end up sounding like the most realized & focused idea you’ll find on this record.  The melody is spot-on perfection, inviting, and authentically beautiful…given that melody is always what I’m looking for, I was basically helpless against battling this holiday-inspired tune – when something is truly great, even if it’s outside of what is your normal taste or preference, you gotta really hand it to the artist or band in question for delivering something seriously strong.  As gentle and comforting as “Christmas Kiss” may be, that’s exactly what it is – seriously strong and 100% professional…going even further beyond that, it’s obviously very timely.  Like I mentioned at the beginning of this review, the fun starts on December 13th with the release of “Marked Man” – but it would be highly odd to not have this song out there into the world before Christmas arrives…I’m sure that’s something Gary’s considered, so be on the lookout for this track to drop pretty shortly afterwards.  I’d be willing to bet on that…holiday tunes aren’t often played all that much outside of the season they’re celebrated in, no matter how good they are…the window is a narrow for “Christmas Kiss” to make its full impact this year perhaps, but it’s a gorgeous song that’s very likely to become a staple addition to the Christmas songs you listen to from this year forward, forever.  In my humble opinion, Neon Radiation has created the quintessential Christmas classic with this final song on the Synthwave EP II: Marked Man EP – it’s a long, long way from where the record starts, but there’s no doubt about the fact that this record ends on a completely timeless tune.