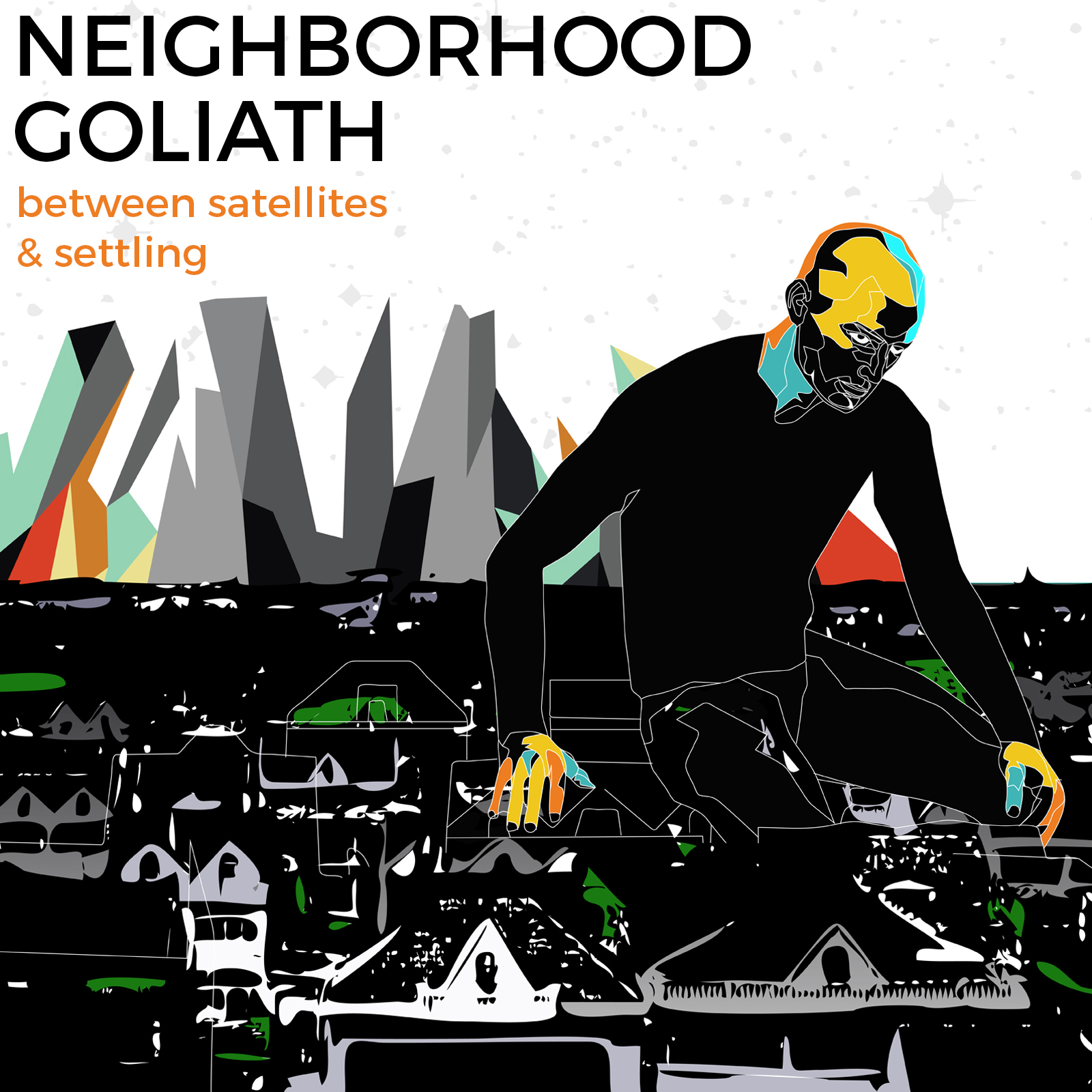 Following one of the best nights of live-music I’ve seen in Vancouver in years, it’s a good thing I listen to as much of this music as I can before writing these reviews…I knew exactly which EP to turn today. I needed something solid that I could bank on…to continue one incredibly hot-streak of excellent music capping off the night before with the extreme sounds of METZ, I chose to go with Neighborhood Goliath in review this morning. It honestly shouldn’t take even ten seconds for you to have pushed-play on their new EP to find out exactly why I’ve made this choice; with a fresh sound that blends fantastic song-writing elements & styles from the past four decades combined – I’ve always got time for music made with incredible passion…and Neighborhood Goliath is built on that very quality.

Or at least that’s how I’m hearing it. Spurred on by the ideas of Trevor Dion Nicholas and J.S.T. Andrews, these two have REAL passion for music you can hear. They’ve taken these ideas in song-writing, and they’ve involved several others who find their way in to make magic through guitars, drums, backup vocals and I’m sure any other way that could contribute. You see…to me…that’s the number-one feeling I get in the atmospheres of the tunes from Between Satellites & Settling – these guys WANT that connection, that inclusion…to music…to musicians…to us.

And right away, “Animals” establishes that connection. For myself, like I mentioned in the intro, it didn’t even take ten seconds for Neighborhood Goliath to capture my attention. Their social-media pages make a mention of Trevor’s powerful voice…and it’s STILL not enough to prepare you for how powerful it really IS. Honestly – that’s everything you could ever ask for up there on the microphone; the tone is perfect and completely ‘on’ in all five tracks off this debut EP, but it’s the genuine emotion and passion that he puts into the microphone that is audibly undeniable. The guitar melody-line carries a killer hook in the chorus, and the bass from J.S.T. drives the verse beautifully. Backup vocals create solid harmonies against the ever-strengthening vocals from Trevor; kind of like Billy Ocean with a set of REAL cahones, there’s an aspect of R&B to this light-rock/pop rune…a hint of 80’s maybe…but any element you might hear is inviting. Extremely welcoming and put out with such emotion, power & passion – “Animals” is a song you can’t help but appreciate for just how much work it takes to get a performance to come out this perfect. And on the first song!

“Waking Life” definitely finds its challenges early on in comparison to the quickly-accepted sounds of “Animals” that start out the EP. I really dig the effect that they’ve put onto the bass in this tune though…at least I don’t think I’m crazy…there’s some real innovation here on this second tune as Neighborhood Goliath heads in slightly more serious direction through the music. “Waking Life” of course could very well be based on the influential movie of the same name; just so happens that movie is one of the most important I’ve ever seen personally. As to whether or not it’s entirely or partially-based around these concepts, it’s hard to say 100% – but I’d be willing to bet there’s a partial inspiration there. By the end of this second-tune, you’ll find how quickly it was able to grow on you…and by the time it’s done, you’ll immediately want to start that one up again. Might not be as quick to catch on as something like “Animals” or the following track “Cemetery Charm,” but I also think they’ve written real songs that will evolve & unfold into our ears upon repeated listens as we catch onto all the elements combined to make these songs work…they’re writing with a real shot at longevity.

“Cemetery Charm” is another perfect example of the versatility in Neighborhood Goliath’s writing. In what is nearly a blend of the first two-song’s sounds together, “Cemetery Charm” also has a real edge to it and charges ahead confidently at full-speed. Definitely let that be said about this band…they SOUND incredibly confident…and from everything I’ve heard on this EP they SHOULD be.

If you’ve been able to resist these two guys so far…well…first-off, you’re probably putting in too much effort into that struggle…and besides, your stoicism will crumble once you hear “Of Atoms & Eve.” This subtle charmer strips down the music to pretty much a simple bass-melody, slight beat and sweetened vocals. It’s still not a slow-song…it’s mid-tempo but sly as a fox with the way it works into your brain from the speakers. As the atmosphere intensifies…Trevor lets loose right around the third-minute in a real highlight…again…the emotion in this guy’s voice is extraordinary and he nails the importance of these lyrics perfectly.

The final-cut, “Suburban Genius” again takes influence from multiple-parts of our music’s history. You could site sounds like comparisons to the Red Hot Chili Peppers or (really) Faith No More through the structure and writing…you could site bands like Radiohead for the way they project the guitars through the verse…and the chorus goes WAY big into territory of bands like Panic At The Disco! or Fall Out Boy. And you COULD site all of those sounds and still not come close to any kind of accurate description of how this final song ACTUALLY sounds, like I’ve just clearly demonstrated. There are elements yes…but there’s nothing here on Neighborhood Goliath’s Between Satellites & Settling EP that isn’t a reflection of their own incredible ideas, no matter what sound reminds you of something else. This band is a truly unique one…they’re making inventive music that really incorporates a ton of passion with a sound that is much unlike a lot of everything else going on around us…and that’s a beautiful thing I can only hope this duo will embrace further as they continue on into their career. There’s a really special combination of talent here between these two on Between Satellites & Settling…something we really don’t hear every day…and I LIKE it!

You can hear more of my thoughts on this debut EP from Neighborhood Goliath on the upcoming episode of SBS Live This Week on August 7th coming up! Episode 031 – an all-music episode, we’ll be including an entire rant from me about this EP…so if you wanna know more about it make sure to tune in this Friday!

For now – find out more about Neighborhood Goliath at their official pages at: