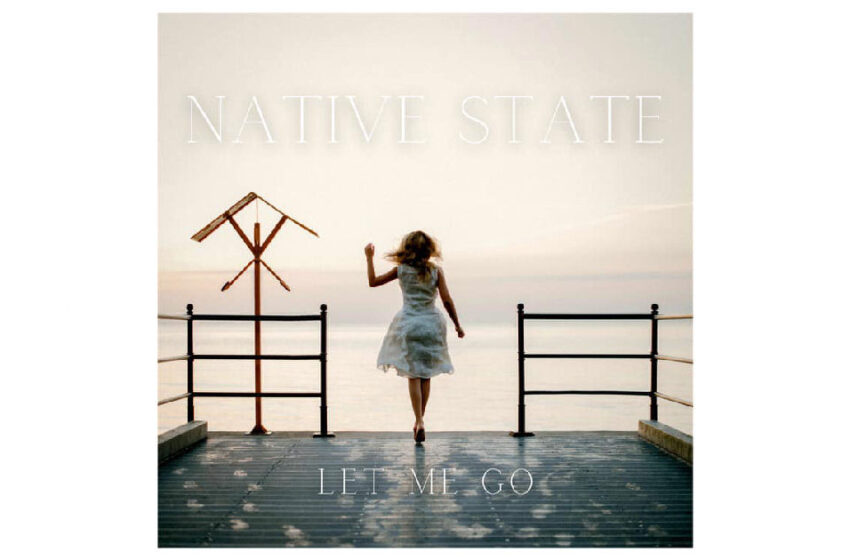 From what I can tell in looking around online, this band is centered around the world of music being created by one dude…a Mr. Wayne Fau, aka that very same Wayne you know from Wayne Fau Productions and his work as a videographer/filmmaker too, of course.  Dude looks like he’s ready to make some serious moves out there in the ol’ music-scene – sounds like it too for that matter – he’s fired-up both in behind the scenes and in front of the studio boards from what I’ve learned about him so far.  Y’all know me…I’m never gonna pretend to know I’ve got the full story of anyone out there when I usually have the music I’m listening to for such a short time before writing these reviews up…but from what I can see in the details online, it’s been go-time for Native State ever since the release of its debut single “Soil” in the final quarter of 2020 – and this project of Fau’s is about to roar to life again early on in 2021 with the official release of the brand-new cut “Let Me Go” coming out very soon on April 16th.

Dude’s a one-man musical army and there definitely ain’t no disputing that much.  I checked out the debut single “Soil” and could instantly tell this project was on solid ground from the moment it burst onto the scene without question.  While you might find valid comparisons to be made from the Alt-Rock universe from about the 2000s on-forward, there’s also no disputing the fact that, 99% of those names you might recall in that sense would belong to full bands – Wayne here, is doin’ this all on his own.  So credit where credit is due folks…there are many bands filled with multiple warm bodies and entities that can’t hold a candle to what Fau can already accomplish on his own – and this guy’s just gettin’ warmed UP.  In a couple years down the road here, he’ll have molded Native State’s music into a nuclear fireball.  Mind you, having heard both tunes already and what’s arguably a noticeable improvement being made to the production & overall sound on the single yet to come – it might not even take a full two years before you find Native State out there, ingratiated firmly into the fabric of the Alt-Rock scene, 100%.  Wayne wastes no time whatsoever, jarring you into the opening of “Soil” with a flash of distortion before breaking into the rumble of highly-melodic verses and supercharged hooks that explode with tangible intensity designed to shake the walls around ya.  All-in-all, Fau actually sounds a lot like the singer from Styrofoam, Arne Van Petegem, even though the music of course, is radically different to the nth degree…but the resemblance you’ll find in the more low-key energy of Wayne’s vocal melodies in the chorus have a real Alt-Indie edge to them that’s bound to broaden the appeal in that regard.  While “Soil” will ride the edge of its Hard-Rock & Metal hybrid of influences and funnel that lightning underneath the Alt-Rock umbrella…ultimately, you could continue to pick pieces from here & there along the way that will have a dramatic effect on the widespread appeal of Native State and how far the music can potentially reach.  Think of it this way…a track like “Soil” reminds a guy like me of a dude out there making music under the name of Styrofoam with a totally different style & sound, which more than three-quarters of the planet have no idea who that is already…and the next two names on my list would likely be something like a more aggressive & evolved version of The Doughboys out of Canada, or how certain aspects of the production & depth of the melody reminds me of early Death Cab records.  All bands that are miles away from the sound of what Native State is doing.  The point is that the amalgamation of Wayne’s influences, whatever they may be, has served him extremely well; he’s clearly an enthusiastic student of the craft in all areas and pushing himself as hard as possible creatively – and the results come back reflecting the diversity of those influences through powerfully dynamic sound he can call his own without being too much like anything else out there now.  It’s a huge plus that works well in his favor…there’s a lot of space out there for a band like Native State in the music-scene, and the level of versatility in a song like “Soil” proves that it can thrive in multiple areas.  All that being said, fuck genres altogether, I don’t believe in them – but I’m sure you get the idea.  No complaints from me; I actually went backwards when I was listening to these two tunes and had already experienced what’s coming up in the new single “Let Me Go” being released this month before I’d heard “Soil” for the first time, but let’s be real here…this debut didn’t take places moons ago, it was just at the end of last year – “Soil” remains a killer single & relevant track in understanding where Native State might be heading with its music in the future to follow.  Plus it’s got a video!  With a full band to rock through “Soil” even!  I like videos.  You?

There’s a noticeable switch that does occur behind the studio boards in between the first & second single that’s probably important to note.  As I’ve already stated more or less, the production & mix on “Soil” is more than commendable…it might be slightly over-compressed for my own taste just a lil’ bit, but let’s also face facts – harnessing the full intensity of Native State in any scenario would be a fairly monumental ask of anyone.  No real complaints on what Brett Stokes accomplished in the Native State debut single; but by that same token, it did feel like Kevin Kerestes at the helm for “Let Me Go” found a way to let the sound breathe a bit more, which I thought worked really well in bringing an ever larger vibe overall to this second single.  It heads a bit more towards an aggressive mix of something between Staind & AIC when it comes to the design of the song & its Grunge-influenced-meets-Post-Grunge harmonies…and there’s an argument to be made for sure that “Let Me Go” is a more hard-hitting cut overall as a result of its production and performance.  Native State decidedly went harder here, and harder it is – “Let Me Go” still works in a highly melodic thread, but it’s also unquestionably going for more agro-sound than the debut did, with just that much more experience in Wayne’s music-career drawing out his talent even further this time around.  So really what I’m getting at is, it could be production, it could be the songwriting, it could be a more confident performance from the main man himself in Wayne being more ready for the second time at bat – there could be lots of contributing factors as to why “Let Me Go” seems to build on what was established earlier on with “Soil” – it’s evolution, baby!  And that’s always what you wanna hear in some way, shape, or form…it doesn’t always have to be dramatic, and the progression here proves that to a large degree between the two tunes…it’s just a few tweaks here & there that likely make the main differences in the final results of both singles.  I might even be more partial to the hooks of “Soil” on a personal level…you might even agree…but I think we’d still all conclude that “Let Me Go” gets more out of Native State overall in many ways, and that’s more than encouraging when it comes to what we might also hear in the future to follow.  It’s angsty to the nth degree – but LISTEN to Wayner here will ya?  Get this man a whiskey or a water at the very least!  He’s givin’ ya an inspired performance from the microphone in the lead of “Let Me Go” and brings his A-game to the intense demands of this new Native State single, leaving no doubt whatsoever…this man’s got an extremely powerful & potent voice when he’s at his maximum ferocity.  Make no mistake though – for a dude that’s handling all the instrumentation as well, it’s freakin’ fantastic to not come out feeling like there are any weak points to be found in the musicianship of a one-man project with such an involved sound; Wayne Fau is a force to be reckoned with and he’s more than stoked to prove that to you from what I can tell & what I’ve heard.

Find out more about Native State at Facebook here:  https://www.facebook.com/nativestateofficial