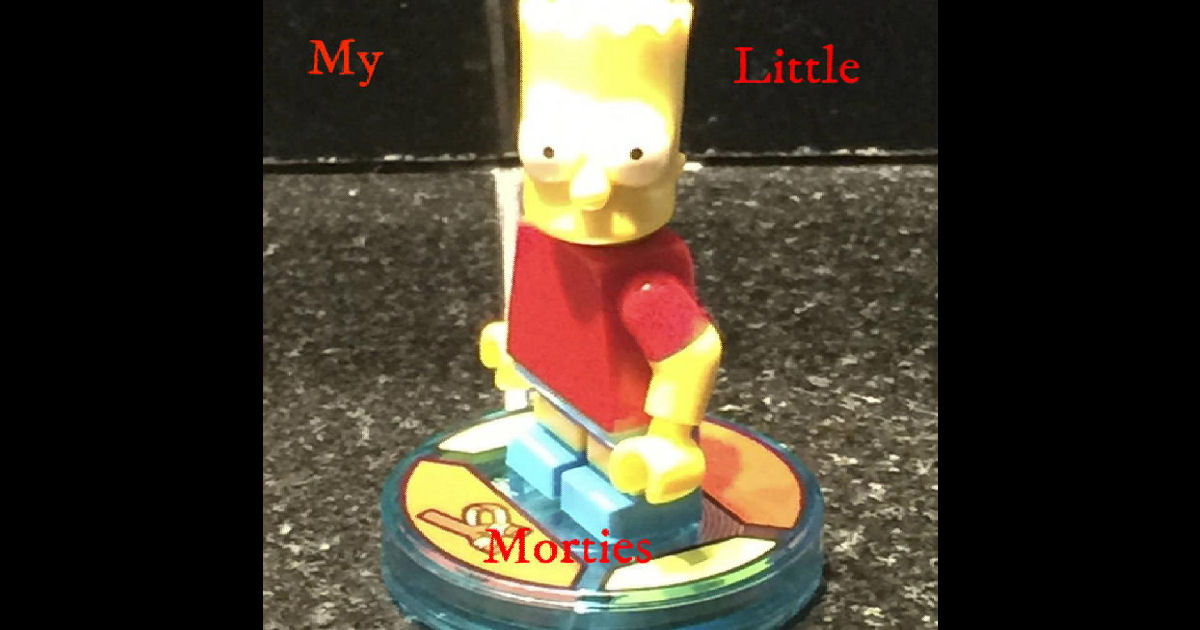 This likely falls under the rule of ‘just because you can, doesn’t always mean ya should’ – My Little Morties is definitely reaching far out there to create new combinations in sound.  As to whether or not that’s gonna work for ya…it’s hard to say – there’s no doubt that this is a bizarre approach to music in general, which usually results in a fairly niche & narrow audience.  I’ve had musical A.D.D. my entire life – so I can hang with the Bart Has Autism EP…but my ears can also recognize what’s hard for the rest out there to follow.  Not like I’m telling My Little Morties anything that wouldn’t already be well-known and I’m not gonna dwell on the inaccessibility of a style/sound like this when that’s just a bloody given…some people will get it, many out there won’t, that’s just the reality of a creatively untamed project like this.  That being said – I like to think that many of you visit these pages of ours in search of something different…and if that is indeed the case, then great news for you – this is definitely that.  Bart Has Autism is built for the audiophiles out there & those that like to challenge what they know to be music with something altogether strange as strange can be…if that’s you, then this is your moment.

“Babys In Blackface” starts what is certainly one of the weirdest sonic experiences you’ll hear this year.  It genuinely sounds like about three different songs layered over-top of each other and an absolutely insane vocal sample at the very front of it all.  For the sheer fact that you’ll likely never hear anything like this, it makes a bizarre impact through its uniqueness; if you’re looking for any kind of typical hooks or ideas, you’re straight screwed right from the drop here – but for those looking for something intentionally deviant, this might just do it for ya.  Personally…I’m not too convinced that these layers interact in any kind of really relevant way, so much as they are united in their goal to create chaos.  The middle electro layer is actually pretty wicked…the guitar grinding away, not sure it was as needed…but I think it’s moments like this where My Little Morties has this kind of stuff fused together that also demonstrates how easily the music could have gone right instead of left – you feel me?  If it was just the electro-side & the smoothness of that coming through, there’d almost be no complaints from the people out there, aside from comments on the craziness of the vocals happening throughout the song.  But you get what I’m saying…it would have lessened the risk…and that’s clearly not something that My Little Morties is interested in doing, obviously.  Accessibility ain’t exactly the main concern here.

I’ve always appreciated Queen probably more than I’ve liked them.  Definitely no issues with the band, they’re all incredible talents and legendary musicians…but you know, I wouldn’t like, fall on my sword for’em or hock my first born to get tickets back in the day…just a great band that makes great music.  Now, if I WAS a diehard though…I’d imagine the re-assembly & reimaging of their massive hit “Don’t Stop Me Now” into “Don’t Stop Me Hand Of Doom” would pretty much make ya wanna choke someone out from anger.  You know how testy people get with remixes of any kind to begin with – you add in the idea of messing around with someone’s favorite classics & believe me, you’ll get plenty of comments and not always necessarily the ones you’re looking for.  I’m wildly on the fence with this one…I think its most spectacular moments come from the sound of Freddie Mercury’s vocals so threadbare in the mix – but as for the times where the music surrounded them, I didn’t feel like I heard anything that really furthered the story of this song so much as deconstructed it completely.  Again, I’m not too attached to the original one way or the other…but many are…and as to whether or not this tinkering with a classic is gonna pay off for My Little Morties…the jury might be out on that.

“Jessica On A Motorcycle” is more my kind of musical oddity.  I dig’em short & sweet like this, that way no matter how wild a concept is, you never wear it out too soon.  Which is probably a good thing when it comes to this particular song…because once it’s all fired-up and doing what it does, it’s going to repeat that at you full-on; still, I think there are some cool things happening here.  I like the frantic vocal sample and how no matter how much I listened to it, I could never make any damn sense of what was being said, no matter how hard I tried or put my ears to the speakers.  There’s also a completely badass like, muted scream or something that comes in to the mix…by the time you even notice it has crawled in there, it’s already in agony, but sounds fantastic.  All-in-all, “Jessica On A Motorcycle” is like a switchboard circuit that has gone to hell with the connections running amok & on repeat – but the odd hypnotic vibe in this short cut and the explosiveness of the drums and broken answering machine-like sounds were pretty intensely creative on the inside of a minute when it comes right down to it.

With the cry of a baby starting up the final track, the texture of sound comes through in waves at first before launching into its reversed vocal samples & hypnotic electro-psychedelic style.  If anything, I think I dig the final two tracks much more than the first two.  “You Were Never A Star In The First Place So Why Are You Saying That You Are A Star” is oddly addictive…but again, I dig the weird shit.  I listen to Venetian Snares by choice, loud & proud; and if you can stomach that ride, believe me, the rest out there is fairly laidback by comparison.  But in terms of the bizarreness of the ideas – there’s definitely a comparison to be made between the two acts when it comes to a song like this final one on Bart Has Autism – this is literally for people that are addicted to sounds of all-kinds, and not really anyone else.  My Little Morties is likely just fine with that…you really don’t end up making music like this unless you’ve already drawn to the conclusion that you’re doing it because you love it, not because people will listen necessarily.  The right ones will and there are more than enough of’em out there to encourage a project like this to continue pushing the boundaries of what we know into something altogether twisted & different.  Ain’t nothing wrong with that…just like Venetian Snares in that sense, there will be moments of genius in this project and likely just as many that die a fiery audio plane-crash style of death in your speakers…but it’ll always be something new that you haven’t heard, I can guarantee that.  Interesting.

Find the music of My Little Morties direct at Bandcamp:  https://mylittlemortes.bandcamp.com/releases