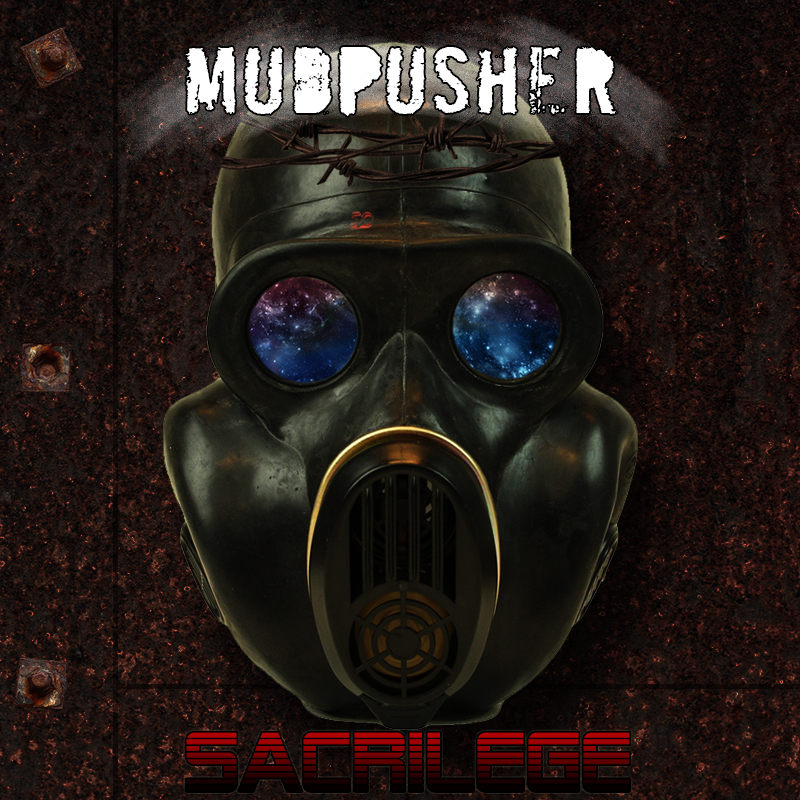 You literally have no idea how happy and relieved I am right now. Seriously – I got out of bed this morning feeling like I was trapped under bags & bags of sand without any hope of ever finding myself awake until it would be time for bed. I clambered down the stairs slowly, refusing to lose and forcing myself into the studio to wake up somehow. Looking into my list & schedule for what’s being reviewed – I decided to push play on the new EP from Mudpusher, a metal band from Stockholm, Sweden.

Let me just say…I’m no longer tired. They simply did not leave me with that option.

The EP is short, and it starts quickly. Knowing that Mudpusher was an extreme metal band – I didn’t find myself fooled at all during the smooth, opening sounds of the “Intro” as it opened. What I did hear immediately, were fantastic sonic-textures swirling about through beautiful string assembly – a quick allusion to the title track to follow, “Sacrilege,” which is one epic-mother of a song. As it quickly ranged from tempo & sound and stomped over all the plants in my house through sheer volume alone; I was impressed with the tight sound this five-piece band has put together here.

At first – the bass & guitars stood out to me for their Korn-like configurations. I should clarify though! When I say Korn, I mean like….you know, GOOD Korn – long before lead singer Jonathan Davis went a more commercialized route and really began to suck it out. This is more akin to the Korn of old – a band with something to prove still, and a hunger & determination you can audibly hear in the music. The drumming on Sacrilege is insane; the amount of switches, tight-rolls, creative-fills and intensely strong, well-timed hits will leave you speechless. From a drumming aspect – it reminded me a lot of old-school metal band KMFDM and their reputation for creating an onslaught of sound that demands the furious attention you’ll end up paying. It’s beyond intense – and musically, this track has it all; it’s diverse, creative and it really finds both a heavy & melodic groove flawlessly throughout the song.

Let’s talk about vocals for a second…cause that’s where things get even more interesting. Ten times out of ten, in today’s indie-journalism world…any aggression in the music + a female singer = an instant comparison to Evanescence… If this is YOU…or anyone you know and care about…please stop this. Stop it. Right now.

In fact, if I had to compare Kimberly Nordqvist’s vocal-style to anyone, it would probably be Madonna actually. Yep. I said it. I not only said it, I’m comfortable in that assessment completely. And not only do I think it’s factually-accurate – I think that the combination of her beautiful, angelic voice is the perfect complement to the music being made in Mudpusher. Trading off with Alexander Nordqvist, the man responsible for the low-snarling vocals & song-arrangements on Sacrilege – the contrast between the two vocalists makes for intensely rich & diverse tracks that you really come to love for their complexity and immaculately-produced sounds.

As the EP officially closes with “World Destroyer,” this first sampling of the music of Mudpusher has definitely left me wanting more in the future. This track literally pushes air right out of your speakers as it pulses along with a hellfire of intensity. Then about nearly two and a half minutes in…this band finds an entirely new, yet-to-be-displayed sound that nearly finds itself amongst the early records of Tool. There’s a simple guitar note ringing out for all it’s worth until it fades into the background right before they launch into the final frenzy. The end of this track is all-kinds-of-awesome with some truly inventive guitar work closing out this EP on a musical high-note.

I also had the extreme privilege of listening to 2 bonus tracks from the Sacrilege sessions as well. The title track is re-done acoustically; once as an instrumental, once with the added vocals. I’ve often asked metal bands about their ability to include melody into these epic songs; what many people never realize is just how much there can truly BE within the metal genre. The dedication to songwriting & structure…it’s all there in a band like this that is clearly on a path to overall excellence in everything they make. These acoustic bonus tracks really highlight what incredibly skilled and completely adaptable musicians are behind the music of Mudpusher.

From the sounds of things – the future could definitely take this band anywhere they want to go with their music. But if there are two things that are for certain – it’s that they will definitely be around, and that I will absolutely be listening. Mudpusher is a highly-skilled band making some beautiful & intense melodic-metal with extremely strong crossover appeal.