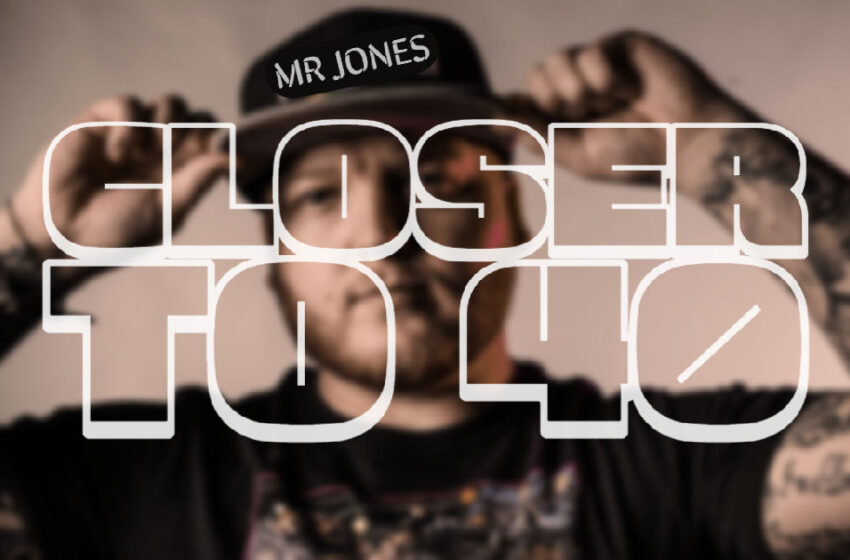 Ayyyyy – pay attention young bloods – Mr Jones has still got the vibe, even if he might be “Closer To 40” today than he was yesterday – this single’s full verbal proof that the man from Manchester has still got plenty in the tank to keep y’all entertained.  Make no mistake homies…he might fundamentally be taking on society’s real issues with ageism with a lighthearted approach and tons of humor in the mix for ya – but Mr Jones is also flexing serious skills crafted with insightful perspective on a situation that will eventually affect us ALL.  That’s RIGHT – even you youngsters just about to step to the m-i-c for the very first time…Mr Jones and I have a spoiler alert for all of y’all – one day, you TOO, will be “Closer To 40.”

So buckle up, and enjoy the ride.  Life gets hella weird over time, but it’s pretty damn wonderful too.

Teaming up with StreetStar Studios, right where he’s based out of in Manchester, to get a focus-group in session for the official video for “Closer To 40,” rest assured, the very fact that this single is out there and available now proves that Mr Jones passed the test, does it not?  He’d have gotten my vote…but then again, I’ve got a whole hell of a lot of grey in my beard these days…forty is in my rearview now, so YOU BET I’m fully supporting this ‘old fella’ as he makes his moves towards the spotlight!  I’m hoping that’s still plenty of time to live those dreams we’ve got out loud, or else someone really should have let me in on the joke by now.  All-in-all, that might be the most effective connection in making a song like this – you wanna cheer for this guy, because deep down, every one of us knows we might get to this very point in life ourselves…and hopefully, if/when ya do, you’ll be lucky enough to have the energy, skills, and desire to get out there & LIVE some LIFE like a rapper Mr Jones has.  Probably NOT…don’t go getting your hopes up – he’s rare – but if ya got 10% of the spark that’s driving him forward, chances are you might be in good enough shape to get by for a few more years yet.

The point I’m making is simple – yes Mr Jones is having some fun here in ways that’ll completely connect with ya both onscreen & through your speakers – but he’s also got a single that’s a whole lot more down to earth & insightful than you’d assume…so like I’ve been tellin’ ya from the get-go, pay attention to what the man has to say to ya.  He’s got precision, flow, fluidity, and PLENTY of swagger for a guy that’s “Closer To 40” – and he’s puttin’ the pressure on you future superstars to step your game up, 100%.

Find out more about Mr Jones at his official website at:  https://mrjonesraps.com