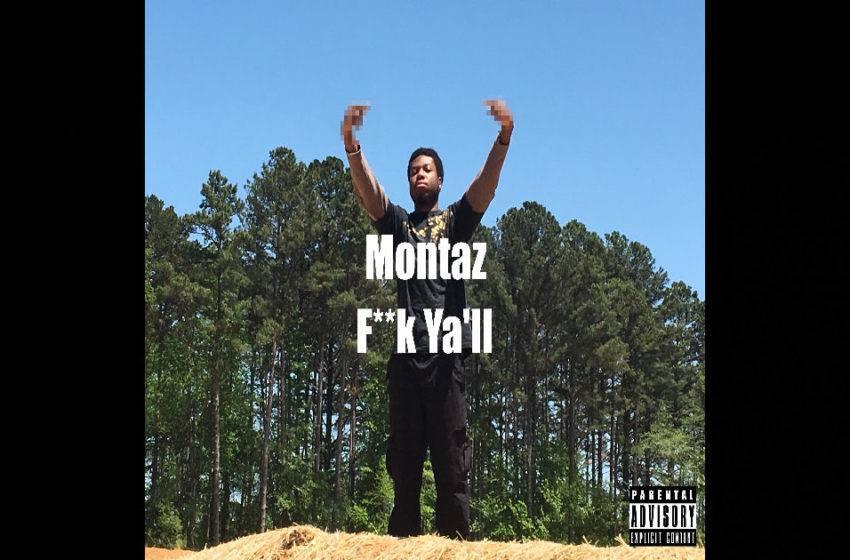 “Check this hard shit out.”  Word to that homie.

Montaz speaks, spits, raps, eats, and sleeps the truth yo – and he’s definitely an emcee unafraid to let you in on exactly what’s on his mind.  On his lead-single from his mixtape Da Underground, this confident emcee takes on negativity, haters, and trolls out there trying to bring the world down on a daily basis – he’s got his middle finger up to the sky, screamin’ “Fuck Ya’ll.”  Can’t say I blame the man.

Bottom line is that, beyond the words, you can hear the determination…and while you might not expect a cut called “Fuck Ya’ll” to be this focused, if you’re listening closely, you’ll hear that Montaz clearly has his head in the game and knows exactly what he wants out of life, his music, and his career.  Most importantly perhaps, you’ll hear from his tone of voice alone, that ain’t nothin’ gettin’ in his way on his way to the top of the charts & playlists out there…Montaz spits clear & direct, but he’s got real grit too.  While he rhymes his thoughts out onto the mic, you can hear the emphasis in all the right places, giving impact & weight to his words so that they pack a punch and get the seriousness across to us all.  He ain’t fuckin’ around on “Fuck Ya’ll,” you feel me?  And if you can’t vibe with Montaz…well…you should be.

Because there are a lot of great emcees out there that can spit hot bars, but what Montaz brings to the mic gives him that genuine edge over the rest, because you can tell these thoughts are unfiltered, raw, and real…and you can tell the man’s got authentic smarts from the way he’s got it all organized and laid out.  Don’t get caught sleepin’ and thinkin’ that “Fuck Ya’ll” is just another track trying to shock you with nothing really to say – Montaz proves he’s got substance and material that hits the mark on this single.

Couldn’t ask for a better video to support it either – you get the full personality of Montaz onscreen in the visuals for “Fuck Ya’ll” while he’s rhymin’ it up in abandoned buildings & outside areas with graffiti covering the walls.  All-in-all, the abandoned building visibly looks like a place where you could get everything you wanted to off your chest without any interference at all – Montaz is the only person in the place and gets it all to himself as he raps this track, allowing him to be free enough to get his own authentic persona onscreen there for us to connect to along with the strength & power of his words.  Expertly shot, edited, and assembled – what you’ll see in the video for “Fuck Ya’ll” complements the vibe Montaz was going for in the song, and gets this future superstar & legend right into the spotlight.

What I also really dig about this single is the style & sound of it all when it comes right down to it – Montaz flexes a timeless & classic Hip-Hop vibe in the music on “Fuck Ya’ll” and showcases that same level of high standards when it comes to his words and how he expresses them over the m-i-c.  His track has flavor yo!  It’s got personality, it’s got a point of view, it’s got an emcee front & center that’s got the courage to spit his truth.  As he continues on in his career, moves like these are gonna count for a ton one day when he makes it to the top where he belongs – when you’re this real from day one, you’ve got that opportunity to keep it real when you reach the pinnacle of your career as well.  With great power comes great responsibility as they say…but I suspect Montaz won’t have a problem keeping his game sharp over the years to follow – he’s got the skills and mindset to make the most of his time on the mic & making music; I’d be willing to bet we’ll be hearing lots more from him in the future.

You’ve heard me shouting about Montaz on the most recent episodes of the SBS Podcast and earlier today on SBS Live This Week – and there’s a reason for that…a genuine one – the man makes a solid cut.  Effort like this deserves a whole bunch of shout-outs & recognition, not just from us here at SBS, but YOU too!  We’re doin’ our part to spread the word loud’n’proud – now it’s on YOU to follow through, but we know you will, because Montaz gives you plenty of reasons to watch & listen to his latest single.  “Fuck Ya’ll” has smart hooks from the subtle charm of the beat to the giant personality on the microphone and an overall addictive vibe to it all that comes out so smooth it’ll slide right out of your speakers.  Impressed for sure and stoked to hear more – Montaz delivers with confidence & conviction.