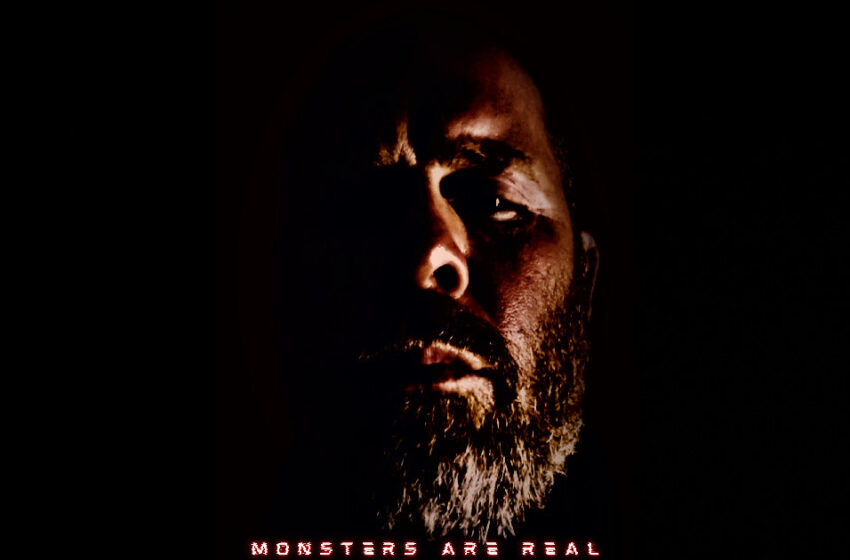 The question becomes, when you read a bio on a new artist or band you don’t know about, and literally 50% of it is spent talkin’ about horses and what’s happening outside of the music – what the heck is it actually gonna sound like, right?  Don’t get me wrong, as the old saying goes, ‘horses are good people’ – I’ve never met a horse I didn’t like myself, but…well…yeah…what can I say – I’m here for the music, man.

What I did like, was the impression I got visually in the picture that came along with the bio – Nathan Brachear, our equestrian enthusiast/man behind the music of Monsters Are Real/hero of our story here, has clearly got himself the kind of personal studio most of us would dream of setting up…we’re talkin’ about ALL the toys you wanna see, right there at his disposal.  From what I can tell, the man’s been using them too – if you have a look at the past couple years, Monsters Are Real has been kickin’ out the jams left & right all over the internet…tons of singles out there to listen to, and I’ve got a couple of’em to talk to ya about here in review today.  It looks as if this one-man band has been crankin’ it up since last year whenever he’s found time outside the stables…so we’ll take ya back to the beginning with a song called “Bullet” to give you a sense of where it started, and shift into “Follow Me” to give you an idea of where Monsters Are Real have gone within such a short timespan & where this project is at, at the end of 2021.

“Don’t bore me with your righteous criticisms,” sings Nathan on his debut single “Bullet” from last year, immediately making me question what it is I’m doin’ here – that’s like, all I do!  You know us critics and our holier-than-thou attitudes that make it seem like we’d be the musical superheroes of the planet if we could just somehow find our way to an amplifier & a guitar – that’s just who we are brother-man.  But at the end of the day, he’s completely right and I couldn’t agree more – opinions on someone’s art, are pretty much essentially trash in 99% of the cases; I’m a firm believer that, as artists, we know where the feedback we value truly comes from, and the rest of what’s said pretty much blows into the wind where all our hot air genuinely belongs.  “Bullet” may, or may not be about how Nathan feels about the art of making a lifetime outta making music…I wouldn’t discount the theory, there are a lot of lines that would create a valid argument as to that being the case.  Anyhow.  You regular readers all know full-well all I’ve got are theories – but listening to lines like “the local guitar playing fool who wants to be famous” will provide you with an insightful glimpse as to how Nathan feels…punctuated profoundly with the very next line coming through as bold as bold can be, when he sings “it gets so OLD.”  So to me…I felt like this track was really about wrestling with time all said & done…trying to battle against BEING that “local guitar playing fool,” but recognizing that the only other real option might be to take that “Bullet” as an escape from such a fate.  It could also be about a man that’s put in so much throughout the years and felt like he’s gotten so little in return…and the perilous dangers that exist underneath the shadows of what we see on the surface.  People are like plants…we need our souls watered in some sort of way that means something to our growth, and without it, we’re bound to wither away like “the attention starved waitress” or “the loud drunk at the bar.”  We need to be heard, or seen, in some way, shape, or form – and without even the most basic acknowledgement of our existence, that very existence we know, becomes threatened.  Not by others – but threatened from within ourselves – the end results, of which, can be every bit as extreme as you’ll hear at the shocking end of “Bullet.”  As he makes it clear through the lyricism of this single, Nathan ain’t lookin’ for pity and he “ain’t got the time to be sentimental” – he’s just tellin’ ya like it really is, as grim as that very well may be in the grim conclusion this song reaches.  I tell ya folks…even though Nathan hints at the ending of this tune to come directly through the lyricism if you’re paying attention…it really doesn’t make the shock value of it all fade whatsoever – you reach the final seconds of this cut and you’re like ‘DAMN!  He went there!  He really went there!’  No doubt that it’s GRIM AF y’all…BUT…I mean…if you enjoy a seriously well-crafted cut that’s executed with surgical precision & great balance within its Blues/Rock vibes…then hey, saddle up & take the ride y’all.  This is one hell of a way to make a debut and an impact that no one listening would ever forget, that I can tell ya – “Bullet” is NOT gonna be the happiest song you’ll hear this year, but it IS really damn good.

In terms of theme & subject matter, sure, I can accept that there’s a broader range of appeal to what you will hear in “Follow Me” when it comes to the masses out there…it’s a lot less weighty and a lot more energetic, and that’s bound to attract a bit more attention.  I ain’t here to argue which of these two cuts is a better song…I could probably make a solid case for both if I’m being honest with ya – I like the professionalism and the songwriting in “Bullet” – and I really dig on the live-wire antics and wild guitar tones that surge through “Follow Me” in the more raw, electrified, and amped-up vibe you’ll find.  The INTENSITY…that’s what I’m getting at folks…that’s what makes the real magic in “Follow Me” come through as boldly as it does…and ultimately, I suppose it’s just as easy to argue that it seems to carry a much more…hmm…positive message than the previous track might have, let’s put it that way.  Fueled by inspired energy from start to finish, “Follow Me” is kind of like part Black Sabbath, part Billy Idol, and partly a hybrid between a Garage/College-Rock Alternative vibe goin’ on too…a tough track to pin down to any one style or sound, and I’m always of the mindset that this kind of versatility leads to attention gained from the fringes of the genres involved…you end up pulling in fans from all over the place when you incorporate crossover vibes into the mix.  There’s clearly no question about “Follow Me” leaving behind the Blues element we found in “Bullet” early on in exchange for fiercely-played, inspired Rock at max volume – “we only got once in this life, so live it every day” as he’ll tell ya, and that’s what this song truly sounds like.  “Follow Me” is like the antithesis of sitting around on the couch – it’s the kind of raw electrified energy that inspires OTHER people out there to grab a guitar and start kicking & thrashing at life from every angle, just like our friend Nathan in Monsters Are Real seems quite content to do himself.  The dude is definitely into what he does…and he’s making his music with realistic expectations – as in, he’s doing what HE loves to do – and if you happen to dig it, then right on – someone will happily slide on over to make room on the bandwagon for you to sit down for sure.  If you don’t like it – I’m of the mind that after listening to his words, I’d betcha that Nathan couldn’t care less – I think this man is more than happy to rock & rock HARD, even if no one were to be listening at all.  I don’t think that’ll be an issue mind you, based on what I’ve heard here so far in his singles online…but yeah…there’s something remarkably authentic about Brachear and his music in Monsters Are Real that seriously connects in a very genuine way the people out there will appreciate.  Dude’s humble, honest, grounded, and real – armed with perspective & riotously vibrant sound & style that’s bound to make an impression on ya, one way or the other, either through the truths in his songwriting or his vivid musicianship…quite likely both.

Find more music by Monsters Are Real at Spotify:  https://open.spotify.com/artist/1pZxsWoZzaXNtYVp9GoMzf