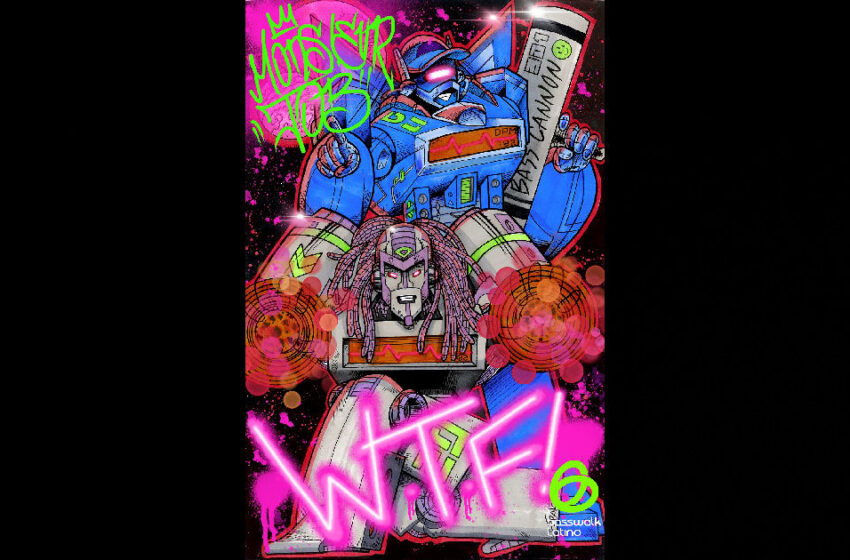 Monsieur Job – “Backstabbers” / “Me Say Me Do (Remix)” – Singles Review

This is grade A y’all.

Look…I’ll be real with ya – I see a band or artist out there with more than ten songs on a record and I’m already supremely nervous for them, given the fact there’s only about three perfect albums with more than that many tracks on them throughout the course of music’s history…maybe five if I’m feelin’ frisky.  But you get the point…it’s rare to say the least – and seeing that Monsieur Job has ONE HUNDRED AND TWENTY SONGS on their new album called W.T.F.!…I mean yo…W.T.F. indeed!  I have no idea how that becomes a thing…did Monsieur Job start out with the intention of rocking a full 120 cuts, ready to do some serious battle with the short attention spans of the modern-day era?  It’s risky to say the least – and ultimately, hard to say whether or not this is a method that’ll work as a delivery system, as opposed to say, you know…what…six to eight albums of like 15-20 songs a piece?  I ain’t gonna lie though – I admire the ambition that’s for sure…and like…well…straight up – if these guys can crack the bat as hard as they do on the first impression I heard of their music on a song called “Backstabbers” – they might actually beat the odds of the lengthiest album ever put out in history.  No joke though – this is one of my favorite cuts of the year so far in 2021…there’s so much personality on display in the music of “Backstabbers” that I am already fully hooked on the smooth grooves & wild vibes of Monsieur Job.  So in terms of a gateway in y’all…I’m tellin’ ya, you pretty much couldn’t ask for better than what you’ll find in “Backstabbers” as a lead-single…this is how to get the job done RIGHT, and entice us all in to listen, 100%.  A jazzy combination of Electro-based sound where crisp drums meet thick bass-lines and brilliant trumpets all firing off with character & charisma, creativity & innovative ideas – believe me when I tell ya that, in hearing “Backstabbers” just the very first time & knowing I still had another cut to check out, I felt like the odds were immediately stacked against Monsieur Job for a moment there.  Because how on earth could you possibly make a better impression than this, or even raise the stakes from here?  Is that a thing that CAN be done – or are we talking about virtual impossibilities here now?  I fail to understand how music could even get to be all that much more addictive than the sonic brilliance of “Backstabbers” if I’m being real with ya…no hyperbole & no hype here folks – no BS – this single really is THAT amazing; I was genuinely blown away not only by the quality of the ideas, but equally for the quality of their sound.  “Backstabbers” is just such a freakin’ perfect stylistic dose of audible COOL that can’t be denied, that’s what we’ve got here – it’s the authentic essence of real single-worthy sound – everything stands out for all the right reasons, from the fluid flow & design, to the radiantly colorful vibes and stellar beat at work.

While it would be a bit of a stretch to say that I felt quite as strongly about “Me Say Me Do (Remix)” – I’m definitely not hatin’ on what I hear either – it’s definitely another high-quality cut from the W.T.F.! record.  Featuring the talents of Jamaican artist Jah Bloodz on the mic, joining the Colombian talents of Monsieur Job – ultimately, everything fits and this is a track I could see just as many people out there loving every bit as much as I loved “Backstabbers” on my own first impression of their music.  They’re both solid gold gems when it comes right down to it – it’s really just a matter of personal preference from there, you feel me?  Between the remarkable talents of Monsieur Job in their production, ideas, sound & style…and the assistance of guest stars like Jah Bloodz on “Me Say Me Do (Remix)” – they cover all the angles and give themselves every advantage of reaching the audience efforts & music like theirs deserves to.  They’ve truly got a fantastic grip on how to make sound truly stand out from the lefts to the rights – either cut would prove that to ya, but they put the extra sparkle into this second one.  All in all, I know a track like “Backstabbers” appeals to me & my own taste personally, and while I’d expect more than a few of you out there would potentially feel the same way in comparing these two tracks – I’d still probably argue on behalf of “Me Say Me Do (Remix)” possibly having even more universal vibes and a higher degree of accessibility when it comes to the masses listening out there.  Precision work & professionalism all around though – like I said, if Monsieur Job has another 118 songs like these on their brand-new record W.T.F.! you can certainly count me in…what I’ve heard here is bulletproof execution.  From Jah’s stellar guest appearance bringing extra personality & another layer of melody to the music through the magic he’s workin’ on the microphone, to the relentlessly stylistic swagger in sound that Monsieur Job is clearly so capable of creating…truly, you can’t lose no matter which of these two tracks you might end up clicking on, and I highly recommend you make sure to click on both anyhow.  These guys have got the juice, a wildly relevant vibe right now, and next-level skills – could they really crack the bat this hard for the full 120 songs on W.T.F.!?  I gotta say, it’s at the very least in the realm of possibility now after all I’ve heard – I’ve been loving every minute I’ve been able to spend with the music of Monsieur Job & I’m 100% stoked to hear more already.

Listen to more music by Monsieur Job at their page at Spotify here:  https://open.spotify.com/artist/6OVt1r9MMcNXZc0P0npaWR