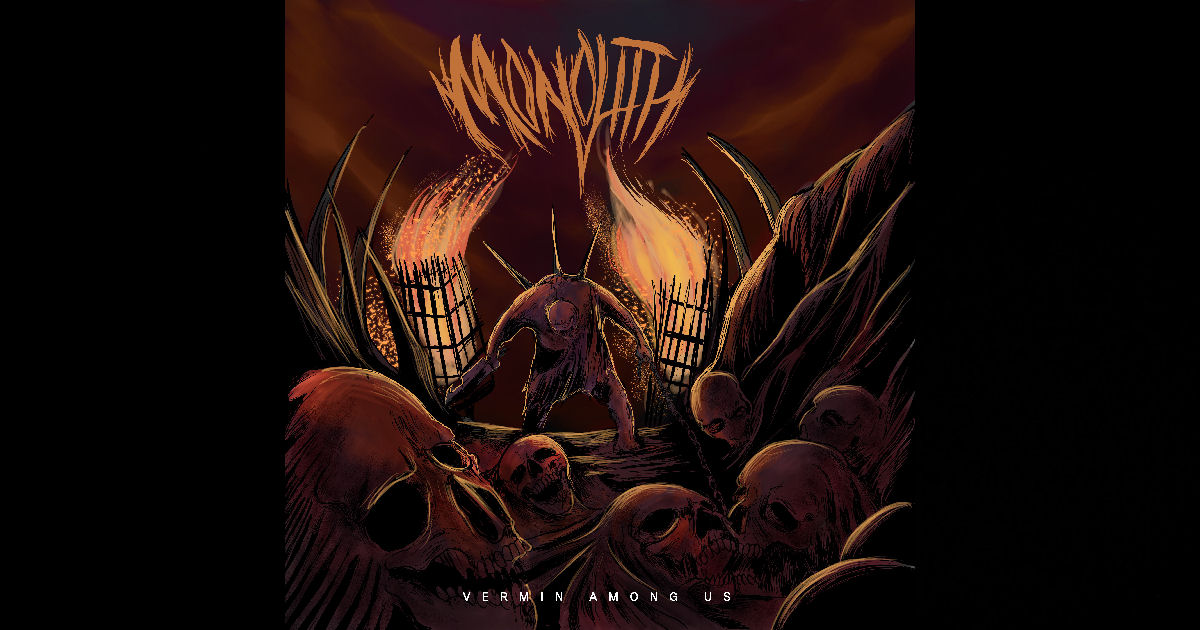 Monolith – Vermin Among Us – EP Review

One-man music-machine Mario Welke sounds determined to turn your speakers & bones into dust with the face-melting mayhem & madness you’ll find throughout the new EP for his solo-project Monolith – this dude sounds like he’s twenty-feet tall and ready to fight Godzilla.  I mean, I haven’t met him or anything like that…Mario’s way over in Berlin, Germany, somewhere across the planet from where we are here in Canada…I’m just assuming from the massive growls and behemoth sounds he’s created on Monolith’s Vermin Among Us that when he stands up he likely blocks out the sun for a whole village.  Because that’s what it sure sounds like people, dear readers, dear friends…Monolith is going BIG on this new EP & stuffed it full of the gnarly & twisted charisma that pumps the heart of Death Metal music.

For example, listen to the way Monolith roars into place & begins “Spit,” the opening cut on the record that immediately goes for the throat – literally and audibly.  You’ll see from the lyric-video below (which is incredible, by the way) that as far as the words go…well…we’re not exactly talking about sunshine and rainbows here are we?  Hell no we’re not!  Monolith is out for blood on “Spit” and obviously unafraid to get downright grim & brutal through the lyricism that comes along with the sheer sonic heaviness in the EP’s opening track & first-impression…one way or the other, it’s definitely a cut that’ll make an impact on ya.  Killer drums, badass guitars, and overall, “Spit” never takes its foot off of your throat, remaining threatening & dangerous throughout the powerful display of force taking place within three-minutes.  “They are just meat/skin is getting dark” has gotta be one of THE GRIMMEST lines I’ve ever honestly encountered in ANY song that I can recall.  I mean, you can check out “Spit” yourself below to get the full context on how that comes up in the storyline here…but you know me people – there are so many days where a music-reviewer-type like myself can feel like we’ve heard it all before – and I haven’t heard this.  And while I can recognize that not everyone out there will have the stomach, mindset, or ears, made for this level of depth in the imagery of the lyricism or brutality on the concept – to me, I can also dig on “Spit” for those very same reasons…honestly when you look at it from a writing standpoint, a track like this is actually pretty damn daring.  Mario is clearly not pulling any punches on “Spit” and unleashing the beast right from moment one on the Vermin Among Us EP…I think courage in music like that deserves credit for being willing to go where others simply won’t.  Plus, like, I mentioned this lyric-video is awesome right?  Call me as crazy as Monolith if you like…but…I can see/hear multiple ways into the music here based on what you’ll find on “Spit” – strong opening cut with really smart video support; definitely an impressive beginning when you factor-in that this onslaught of sound stems from one man.

The punishing opening to “End Of Times” is fucking gripping right from the drop…not quite the same genre, but similar to stuff I dig in bands like Failure and Quicksand’s early raw vibes.  Monolith is definitely the kind of project designed to potentially bring about the “End Of Times” sonically, so I suppose there’s a sincere reason for the intensity when it comes to this tune…maybe Monolith is trying to hurry the process of destruction up a lil’ bit more.  Loved the switch & transition Mario makes around the 2:10-ish mark…doesn’t last long, but its moments like this outside of the main meat & potatoes of the verses & choruses that show Monolith is thinking on a structural level & determined to deliver something that’ll rock the shit out of your speakers, but also genuinely entertain.  Don’t get the man wrong…just because he’s making Death Metal music doesn’t mean it wasn’t made to be enjoyed.  Ultimately, songs like “End Of Times” and even “Spit” really do reveal that there’s lots people could hang onto when it comes to the structure of the cuts on this record…it might be an all-out assault of the extremes comin’ at ya, but you can still hear verses, choruses, breakdowns, solos…the music has the definition it needs to not just be confused with another noise-act disguised within the heavy genres.  Dig the aggression, dig the intensity, dig the performance that Mario puts in and the skill on display – again, don’t confuse pure sonic rage for any kind of thrash or laziness – this guy puts in the work & effort required to make these cuts stand out solidly & clearly isn’t cutting any corners.  For a one-man show, Mario’s put impressive attention to detail into songs like “End Of Times” and ensured there’s no dead-space or any remote possibility of anyone getting bored with untamed energy he puts into his material.

Guitars lead the way as “World Behind” sears & seethes into its opening, soon switching it up to a raging low-end rumble & grind and featuring the vocals of guest-star Andreas Joklitschke on the mic.  I’m gonna assume that’s still Mario snarling at us in between the verses that Andreas sings…call me crazy, I just have a hunch.  In any event – the contrast of sound between the verse & chorus of this cut is a huge part of what makes it work as well as it does for sure…the smoothness & clarity that Andreas brings to “World Behind” gives the sound of Monolith a whole new dimension when he’s singing – and when that switch occurs and it’s time for Mario to get his growl on again, it makes a remarkable impact.  I’ll admit & regular readers know, Death Metal & perhaps even Heavy Metal wouldn’t be the genres I know the most about by a fair margin…the animal-esque vocals of this particular style aren’t always my go-to choice being the melody-guy that I typically am…and it’s songs like this that are most likely to change my mind & get me onboard.  Monolith bridges the gap really well with “World Behind” and gives you us regular puny humans a chance to hang on a bit harder with the melody that Andreas brings to the song – but it also allows us the opportunity to really appreciate the raw power of Mario through the contrast.   While it’s ultimately a hard record to pick what the ‘single’ would be or should be – I’d be taking a look at “World Behind” based on the fact that it does contain a degree of crossover appeal that the other songs don’t have through the addition of what Joklitschke brings to this song…definitely a chance to snag a few more listeners & widen the audience a bit more with the versatility on this collaboration.  Plus like…I mean damn, the vocalists both do a great job, the breakdown is haunting & a genuine highlight – and beyond all things perhaps, the guitars continue to savagely impress with searing tones & hooks of their own in the main-line of the chorus that work brilliantly.

Ending with the title-track, “Vermin Among Us” has Mario back in his beastliest form, growling & snarling through the microphone & providing that audible dose of menace through your speakers at all times.  In many ways…I think there’s a solid argument to be made that this final track is likely the hardest in the entire set…each of these tunes will present a solid counter-argument, but there’s very little light coming through the cracks of darkness in this last song by comparison to the rest.  This is that good-good ultra-heavy stuff for those that sincerely love it – that’s where it starts, that’s where it ends; I’m sure Mario has next to no illusions about converting new recruits into Death Metal…it’s either something people dig or they don’t & they know the answer to that question within about three seconds of any given band or artist in the genre.  And in that sense, making Death Metal music has always had a freedom very much unlike any other style out there…there’s no need to cater to anyone in this genre…the threshold for what to expect is already set; anyone listening is bound to have a chance in digging something like Monolith’s Vermin Among Us, because chances are, if you got so far as pushing play – you already kinda knew what you’d be in for…you were probably already a fan of Death Metal.  Monolith will give you more of what you love & give it to ya raw – there’s a huge amount of edge & moodiness that helps this project stand out from the rest…and ultimately, no concerns or faults to be found within the musicianship or ideas on this EP…fans of the genre would without a doubt dig what Mario has goin’ on here.  As for the Top-40 crowd…well…they can still go fuck themselves…they opened the wrong damn door if they pushed play on Vermin Among Us…it ain’t a record made for them & it ain’t mainstream…this is for the diehards that really get what unapologetic & bold Death Metal is all about and those unafraid to dive right into the endless sonic depths of despair, rage, pain, & menace.

Find out more about Monolith from the official pages below!