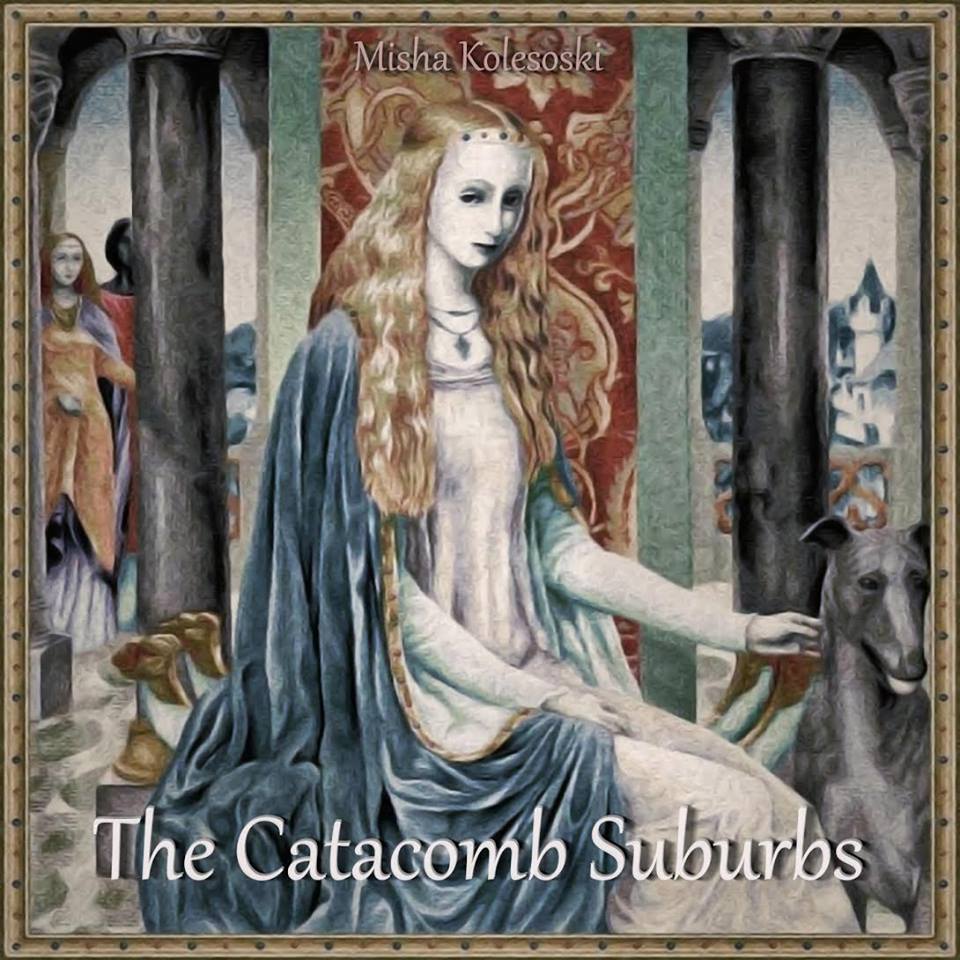 So…well…you’re not often going to stumble across something as unique in its intention as this is. Misha Kolesoski’s new album, The Catacomb Suburbs, is the musical retelling of what is widely believed to be the very first gothic novel…dating back to 1764 and called The Castle Of Otranto. To put that into context for you – that means BEFORE Poe…before Stoker…before pretty much anyone decided to go that literary direction, there was Horace Walpole and his story, written originally in Italian. In learning this…it opened up a ton of questions for me instantly regarding the process of writing this album, and, like a fool I looked for insight and immediate gratification in answer-form by pushing play on The Catacomb Suburbs – and of course it opens up with an instrumental, “Dramatic Studies In Forensics.”

While I might not have immediately received an answer to my ever-forming questions, I did at least uncover a rad start to the album with a glitch-filled electro composition that eventually breaks through to a crushingly-good melody as “Dramatic Studies In Forensics” continues to build and rapidly captivate. There’s a massive skillset in play here…Misha Kolesoski not only understands structure clearly, but also how to break-free of it entirely to create new textures that really stand out inside the music. As it heads dreamily into “Eden In Foreclosure,” you’ll hear what I’m saying, but from another perspective entirely. First of all…the backing music is pure freakin’ genius…it’s like a haunted-house melody – and the contrasting brightness of the gorgeous female vocal-lead is an idea executed in full-bloom. As chilling as it is beautiful, Misha finds a truly winning combination early on with “Eden In Foreclosure;” beautiful vocals and strings…great performance and production…but truly, the idea of this song itself is the star here.

But that’s interesting too isn’t it? Assuming that the book does date back to 1764 or perhaps the rumoured 1529 – it’s somewhere between the 250-500 YEARS old kinda-old. Like, OLD-old! So has Misha ever actually put hands upon this tome? I don’t know if that’s a possibility for just anyone…I’ve never tried to put my own hands on a book more than 200 years old – do they let you? I suppose what I’m saying is that it’s always interesting what inspires us whether it’s first, second, third-hand information…we all find something interesting in things others know nothing about – and music can be a tool to learn things you’d never even thought to know. Like the very existence of the first gothic-novel…I had never considered it even before – but now thanks to Misha, I know there was one and I know it by name. As to how it entirely relates to the electro rhythms and unique genre-defying material on this album…I’m not quite sure. Again…what I know is that songs like “Ghosts” with its Spanish (I think?) influence provided through the skilful rap-vocals of Karina De Santiago stood out for its uniqueness just as much as the following track “Bianca” did instantly for its creepy organ electro-melody that turns into a track SO SMOOTH you’d never see it coming…and then cleverly…oh-so-cleverly, these two-worlds and parts of the song begin to merge closer and closer together until fully blended. I still have no idea how it relates to The Castle Of Otranto…but I know I sure as hell love the bizarre vocal-samples that line parts of this tune – they fit right into this chilling-yet-groovy song that is “Bianca.”

“Isabella” starts to bring the story more clarity through more direct lyrics, or, well, lyrics at all I suppose…there’s that and also in the background of writing this I’m starting to learn more about The Castle Of Otranto…and from what I’m gathering here from the emotional tone to the music and to the lyrics, we’ve got a writer here that sympathizes deeply with the plight of “Isabella.” Her story’s is a pretty grim one really…there’s this whole love-triangle thing and a she was gonna marry this dude and then he got crushed by a giant helmet…cause…well…I’m assuming he totally walked by the ‘falling giant helmet’ sign. Like – what? It’s a bizarre story…but as a muse for inspiration, literally limitless and what Misha has done on The Catacomb Suburbs is pretty ambitious to have taken it on but also smart to do so as there are so many places a story like this can take you in your mind.

SPOILER ALERT – “Theodore” is totally the lost son of the Friar, Jerome. Just so you know…I feel like I’ve been holding onto that piece of info since The Castle Of Otranto season-one…I think it’s like, in its tenth now, tied with Friends.

All kidding aside…”Theodore” wasn’t the track that worked for me the most easily at first. There’s a whole lotta synth-love goin on here and it’s fairly well-pronounced in the mix…maybe a bit too far up there. With the chosen tones & sounds, “Theodore” comes out a little on the video-game-ish side of music…wasn’t my favourite, but once again another song well-assembled from Misha – no complaints there from me.

Because personal taste can be a strange enough thing as it is – I’m not even sure I can always explain my own! I’m not sure that if I had looked at “Theodore” and “Recordar El Pasado” on paper that I would have thought I’d like “Recordar El Pasado” better – but hey, here we are. I not only absolutely LOVED this tune – but it reminded me heavily of the style & atmospheres you can find in Massive Attack’s music. With a chilled-out trip-hop vibe, “Recordar El Pasado” found a way to put everything about this album right back on track for me and marks a massive shift on this recording…like an audible place-marker that tells you ‘It’s ON’ – and from here, things get somehow even MORE inventive.

“Manfred” through its vocal-samples…sounds like it tells most of the tale of The Castle Of Otranto as directly as you’ll get it on this album. It has actual name-drops of the characters and reveals pieces of the plotline…but let me just tell you this – even if it DIDN’T contain all this literary-reference awesomeness…”Manfred” would STILL probably be one of my favourite songs of this year. I thought the melody was an absolute jaw-dropper…I’m not even sure if it’s electro or guitar-based…or perhaps electro-guitar-based…but whatever it is works SO WELL with the vocal samples – “Manfred” is genius.

Chloe J has made an appearance on several tracks to lend her flawlessly-sweet vocals to the music of Misha Kolesoski – and I’ve appreciated her voice more each time I’ve heard it pop onto this record. Definitely a clear style and professional approach to her singing – she sounds fragile and angelic on “The Cinema Landscape.” The resulting combination of talent and sound might come out all sounding a little closer to something like Madonna’s “Frozen” than they might like to admit to…so how about maybe Madonna-meets-Boards Of Canada. I really dig the subtle-beat against the grace & charm of Chloe J’s performance…and the music-box-ish sparkling sounds are fantastic…purely fantastic.

Cleverly…Misha creates the most beautiful atmosphere on the record so far for the basis of the story’s most universally misunderstood/misinterpreted character. “Matilda” is the thread that pulls much of this overall story together…depicted as the image of ‘forbidden love’ throughout the story…she could very well also be interpreted as a symbol of love without restriction…freedom to be who she is. Perhaps the most stunning of all songs upon The Catacomb Suburbs, “Matilda” is another example of this innovative artist’s masterful grip on versatility and inventive song-writing.

Alicia Perrone does an incredible job on the voiceover of the final song “Sonnet.” Set amidst a melancholy and beautiful piano…this final song starts out in an almost gentle nature before amping-up the energy on its way towards its last minutes and seconds of the record. Filled with mournful violins and a perfectly-produced low-end drum-rhythm…”Sonnet” ends this experience perfectly.

Sometimes…yeah, sometimes we have to admit like, when we’re watching a movie like, Magnolia per-say…it’s cool to watch yeah…but to admit you fully ‘got it’ would be a lie. I can’t possibly cop to knowing how each and every tie in between The Castle Of Otranto and the music of Misha Kolesoski actually IS – but again…I can certainly tell you with enthusiasm that I love what I hear.

Check it out for yourself! Find The Catacomb Suburbs from Misha Kolesoski here on YouTube: https://www.youtube.com/playlist?list=PLCrkmyUa7l6oem1gX1JeZDhknfJ5Z9Sra