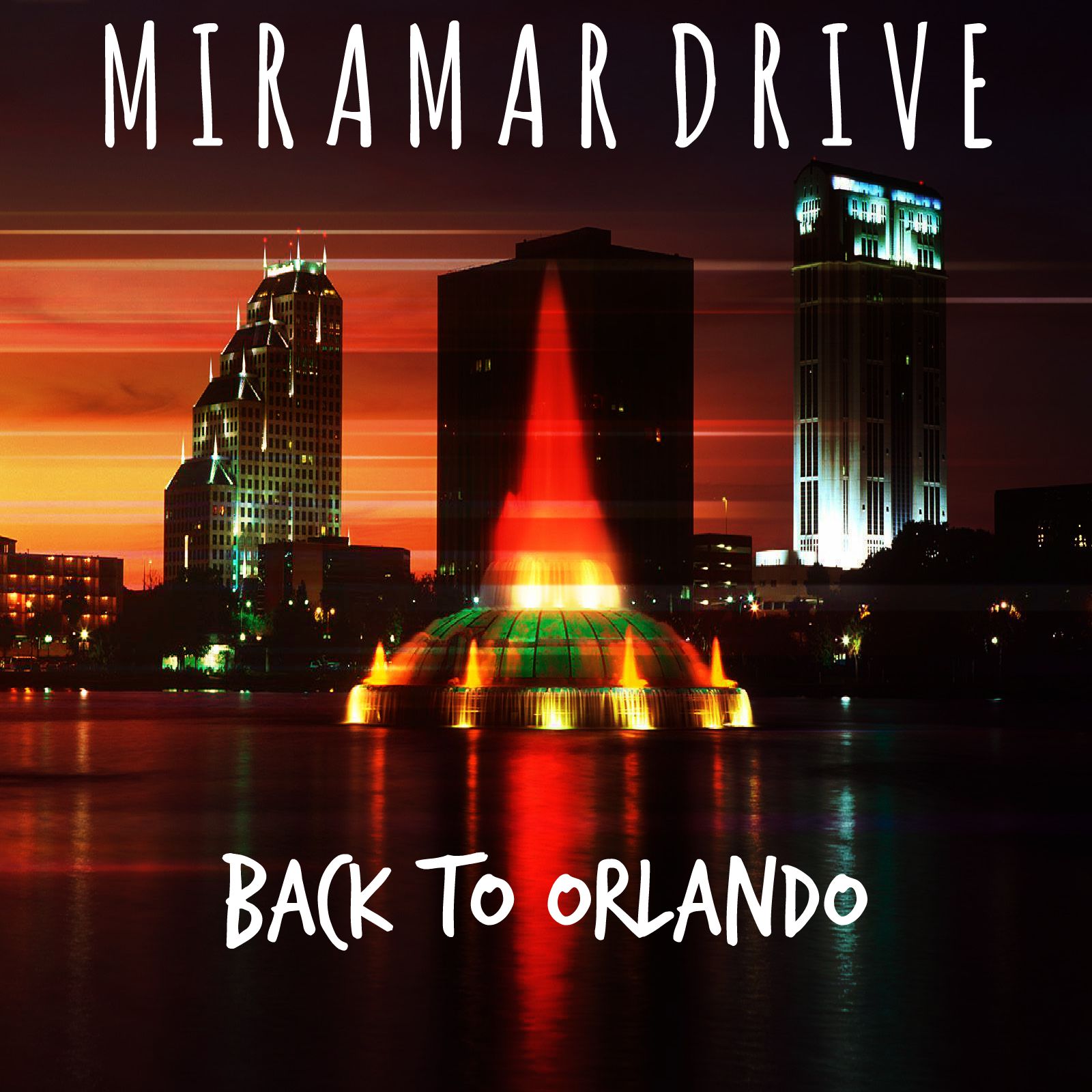 Looks as if we’ve got ourselves a one-man show here! Jacob Craddock, the man behind Miramar Drive’s music is not only kicking ass on his own – but if you have a peek into his social-media and links you’ll see this guy is ramping-up for the promo, the shows, the release of Back To Orlando and all the good things that come with supporting the brand-new tunes. Jacob looks like a young dude just getting started-out…should be very cool to check out this new album that sounds like it has an entire band on it; all created by this one guy…

Opening with the album’s title-track, Miramar Drive starts out with “Back To Orlando,” which comes out shining bright in the mix right away with distorted guitars, rubbery-bass and thrashing drums all combining to create a punk-pop-power-anthem right out of the gate. Somewhere in the middle of Green Day-meets-The Kinks…it’s a solid beginning and certainly packs a satisfying punch through its aggressive-yet-accessible sound.

“Young” takes the direction a little further from the opening aggression into a more slow-burning intensity. I dig the effects that Craddock’s used on his vocals throughout the verse…I’m not gonna harp on him for clarity when it comes to the idea he’s after here…what he’s doing completely fits the song. The chorus…was alright…I’m mixed on that truthfully…it’s decent but I found myself looking forward to the verse and its wicked effect-laden sound. I think I was looking for the music to come up along with the vocals in the chorus…but it sounds as if the music doesn’t particularly move too much around the vocals that become raging clear. That being said…he’s doing some rad stuff with his harmonies and guitar-work…and I found that the overall idea in the chorus worked better for me upon the repeat listens than the initial one; nothing wrong with music that takes a little while to sink in…that just means it’s meatier.

If he is handling his own production as well…credit to Craddock for trying some pretty excellent things with his music. The stereophonic-aspect of his acoustic-cut, “Letters To Life” makes it stand-out strongly in the ol’ speakers as he strips it down musically but keeps the attitude raging throughout the vocals. Even more credit to Craddock…he’s knows how to write a hook…all three songs have had plenty so far and have stayed in a range of wide-crossover appeal…

…which will change at track four and become a tad-more exclusive as Miramar Drive explodes into punk-induced mayhem & madness on “Mirgrane.” Again…really clever ideas through the vocals and how the backing-layers intertwine throughout this storming beat. If anything…on a cut like this…it was a little bizarre to hear the lead-part of Craddock’s vocals almost take a melodic & gentle twist in the midst of his most intense beat on Back To Orlando so far. This is the tune where I’d have most assumed he’d have brought out an effect similar to what was used on the verse for “Young” earlier. At just over ninety-seconds long…it’s as punk as it gets through the music…just seemed like this is where the music might have been supported a little more through some throat-ripping vocals to go with it…maybe that’s just me!

I’d honestly like to know what Jacob thinks about “Chill Your Bones,” aside from my own opinion. It’s so radically different than the rest…much more of a pop-electro-rock/post-punk vibe to this song…but this is something he should explore a whole lot more. As a result of it being so outside of the norm…you can hear slight issues in the mixing of this one that don’t plague the others…but MAN – there is a MASSIVE song here. Craddock himself would have to admit that he’s a lot more comfortable when the microphone effects come out and mask his natural-state – you can hear that it gives him a little more freedom and he really puts a lot of effort into maximizing his melody on “Chill Your Bones.” I’d say overall this tune is about a solid 90% of the way there…the low end comes through a bit thick in a few spots, the vocals up a bit too much in others…but I would certainly advise Jacob to do everything in his power to hit this one up with a slight-remix to round-out those final corners – this song is completely worth it. With or without a remix – it’s quite possibly the most accessible to all-ears out there and a guaranteed-lock to really captivate the minds of many…and I can only imagine the epic-tune that this could become from the live-stage…”Chill Your Bones” is completely rad in how it swells in melody and envelops the atmosphere.

“Chill Your Bones” also decidedly marks the spot in the album where things really shift creatively into new territory. “Gift” is a piano-led song that follows, and another highlight for idea and melody. The breakdown and comeback of “Gift” is a flat-out fuckin’ moment in time you live for…the thirty-seconds when it all goes quiet and slowly comes back are phenomenal – it might seem small to you out there, but this is an absolute highlight moment for me in listening to Miramar Drive. The guitar work, drums, synth and piano…jeeeeeeeeeeeez dude – this is right on the edge of something as fantastic as Massive Attack right in a moment like that…seriously awesome.

Continuing into the mellow, “Never Let You In” might remind you of a band like Blink 182 or Third Eye Blind in their slower-tunes. I think Craddock does himself proud through the vocals here…they’re somewhat shaky in the sense that you can still hear there’s a bit of room for him to grow and evolve into the confident singer he’ll become…but it’s that same tremble in the vocals that makes this one a little more special than the rest. That shakiness more than likely comes from the added weight in the emotion and sentiment of this song…and chances are no matter how professional he might ever become, singing something as personal as this one is something that proves difficult for anyone out there; when you really FEEL those words…and that rush of emotion-meets-adrenaline kicks-in…believe me…it can be tough for even the most pro to keep the tone in full-check.

But don’t get me wrong…the dude knows what he’s doing and his instincts could lead him incredibly far making music in Miramar Drive. The layout of the album and the way it flows even confirms just how much Jacob thinks about the music and the experience; and I think he’s done a genius job of ending Back To Orlando with the electro-infused “Amaranthine Heart And Citrine Eyes” – this is a BIG song that leaves a massive impact on a listener’s memory, believe me. It’s like a cross between Bush and then something written like something closer to “The One I Love” by R.E.M. – and then like, remixed again by someone awesome like Styrofoam. The recipe…or whatever the secret is…made for an outstanding ending and wrapped up an album that truly makes a massive progression in its sound from bookend-to-bookend without feeling forced at all. You can tell that Jacob has eaten, slept & breathed music his entire life…he’s probably in the headphones or in his studio right now even…but it’s that true love and dedication to his craft that is going to lead him places in his music-career. I like what’s happening on this first album from Miramar Drive and I think Craddock shows a potential for music that most don’t or ever-will…and he’s doing all this amazing stuff on his OWN. Impressive for sure.

Find out more from the official sites for Miramar Drive at: