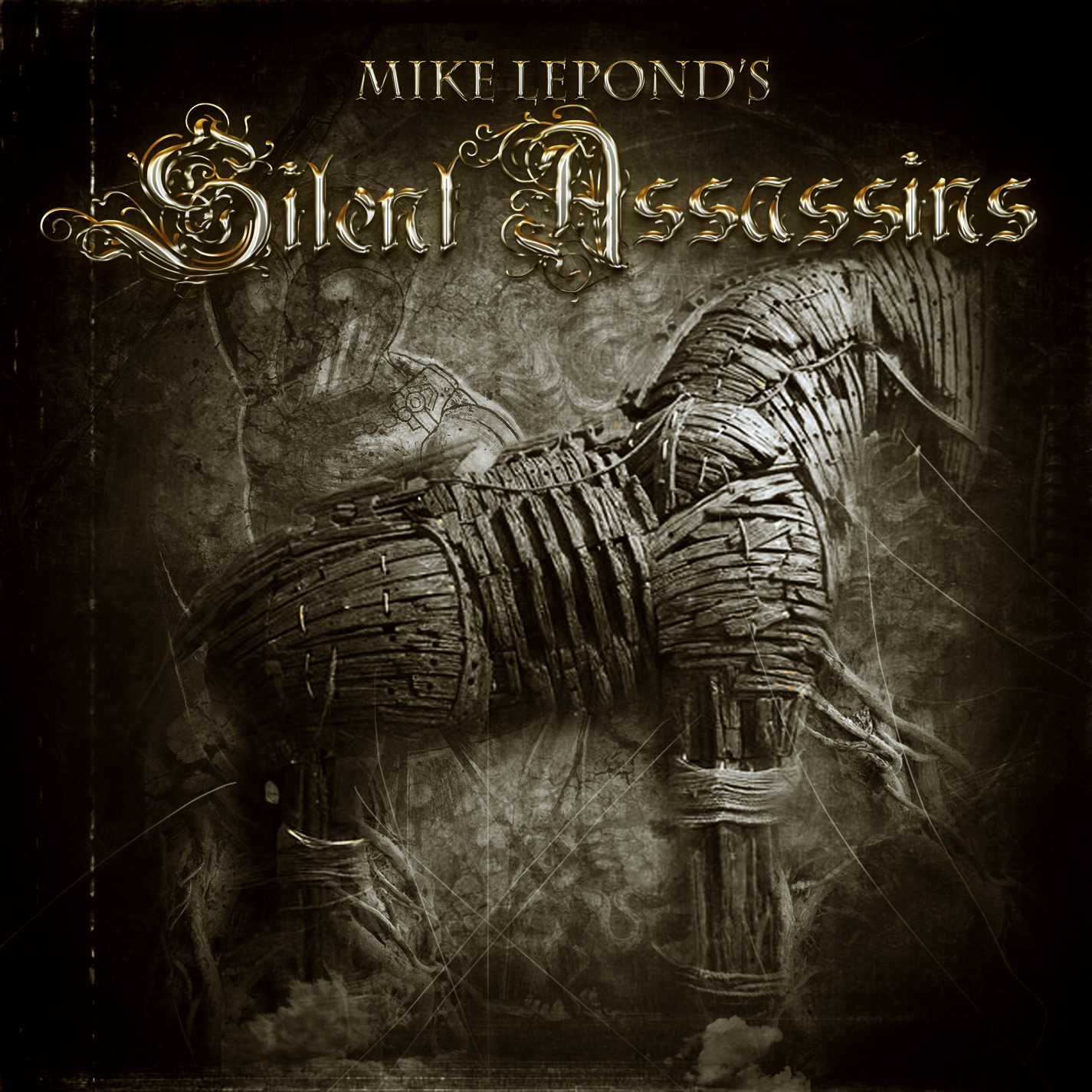 I suppose you have to give a guy some credit when they’ve been a part of what has helped shape the metal-genre over time…or, in this case, several people.  I had to rub my eyes a little in disbelief over some of the credits that come along with the players on Mike Lepond’s Silent Assassins…I’ve heard of and know music from several of the players backgrounds.  Collectively, the band you’ll hear on this new record has credits that range from bands like Symphony X, Testament and Watchtower to solo acts like Halford and Sebastian Bach of Skid Row.  So…yeah…make no mistake – when we’re talking about Hard-Rock & Metal today here in this review of the new album from Mike Lepond and his many cohorts, we are talking about songs being made by the very people that love and respect the genre most of all.

With that being said…how it came across my desk is a mystery!  I’ve long been critical of Hard Rock…which, by today’s standards…the music you’ll find here on Lepond’s new record will come a lot closer to than it might to what you know to be Metal.  You can certainly argue the traditional-metal aspect of Silent Assassins…it never leaves the atmosphere of the record.  If this were set two decades ago, there’s no doubt it would be top-grade metal and as hard as hard gets…but we’re in the here & now…a day & age that has seen the metal genre shift and change like its molten core is still unsure of which way cool is.  While some out there have searched to redefine those borders and declare their sound to be this kind of metal, or that kind of metal…a small pocket of powerful resistance continues to make the music they love to a diehard fan-base that simply won’t let this style ever fade out.

If there are skillful soldiers of rock/metal like Mike Lepond out there willing to make it – they clearly won’t have to worry about that day ever coming.

With drumbeats storming out of your speakers, “Apocalypse Rider” instantly puts this record on the attack with guitars crunching and chopping chords quickly as Mike Lepond’s Silent Assassins fire-up the machine.   Gotta admit – there are some truly fantastic harmonies here on this first song…and the energy itself never quits and never accepts submission from the listeners out there, keeping a firm, captivating grip as this opening tune pounds out with bold authority.  Reminded me a lot of Dave Navarro’s one-time side-project Panic Channel and the intensity that they started their record with.  I’ve looked over credit after credit and tried to take in every player’s name I can find…but I can’t actually find a credit or mention of where these drums are coming from.  So either someone out there deserves accolades for a hell of a performance or at least a serious cheer for an incredible programming job – in either case, those relentless drums stoke the fire and get the album roaring on “Apocalypse Rider.”

I commented on the timing-aspect of music just the other day in a review…so I won’t go too far back into that again, but I will say this…when I was listening to “Red Death” I started to think about just how relevant this particular sound is right NOW – and whether you want to call it hard-rock or heavy-metal…it doesn’t matter one iota once you factor the resurgence of a band & sound as enormous as Guns & Roses, which of course is happening right this very minute.  That factor alone is going to blow open doors and opportunities for bands on the fringe of that sound once again…I mean, hell – you can already hear in a song like “Red Death” that what Mike Lepond’s Silent Assassins is doing is closer to that style& sound of G&R than their current opening act of Alice In Chains.  Excellent vocals from Alan Tecchio…the dude just continues to soar upwards octave-after-octave with what seems to be zero-limitations…he flawlessly nails the sound they’re collectively after up front on the mic.  You’ll hear it again soon enough on the following cut “The Quest” as well…sorry…all of them really – if I’m going to make the comment I should at least make it a factual one.  Sometimes he’ll save the real fireworks for the end like he does on the mammoth-beast of “The Quest,” leaving it up to the rest of the band to bring the noise until he lets it all truly rip in that beloved traditional style.  “The Quest” has a lot of really intricately-played guitar work at the very beginning with a stripped-down sound that reveals a ton of melody…and with clever progression, synth-sounds and a gradual build…this third-tune slides right into a slick bass-groove before going on to pound with authority once again.

“The Outsider” is a fuckin jaw-dropper.  That bass at the beginning…I mean…DAMN!  I don’t care who your favorite might be out there…whether it’s Flea, Claypool, Levin…it doesn’t matter…you’ll hear Lepond is every bit a contender with the heavy-hitters of the bass-guitar.  I love the way this track starts…for me it was that shift into a jazzier, more groove-rock based song that make “The Outsider” standout.  I like the rest of the track as well…it has a real heat & bold-character to it…but I’d be completely lying to you if I didn’t say that I must have listened to the way that “The Outsider” starts about twice as much as I have the full song.  The skill-level there is more than commendable and certainly deserves a lot more recognition for what’s being done on “The Outsider” than just these words on our pages here – this is definitely a player, and entire GROUP of players along with him that should all be household names if they’re not in yours already.

So…for the record…those people alongside Mike Lepond (Bass, Guitar) that you’re hearing on “Masada” and the rest of this album, are: Michael Romeo (Lead Guitar), Alan Tecchio (Vocals) and “Metal” Mike Chlasciak (Lead Guitar)…just in case you want to memorize’em for the test I’ll hand out later on…

You won’t need a test.  Fans of the hard-rock/metal genres will absolutely latch onto the quintessential sound of the metal-ballad in “Masada” as the band goes on to induce a true lighters-up moment on this new record.  Personally I think they’ve done themselves truly proud on this song…I think there’s a much larger accessibility factor for one – but more importantly…it sounds genuine.  So many ballads from this particular genre/style of rock/metal have come out so overblown, so overdone and so cream-cheesy that I’d think many of them would listen to those same tracks now and want to die of embarrassment – but not Mike Lepond’s Silent Assassins.  I think “Masada” serves up a truly diverse highlight on this record and really shows you the band can pull off a captivating softer-sound just as well as the hard stuff.

Not that you should be doubting any of this by now with the amount of skill they’ve played with…nor should you be assuming that they’re not going to go ripping right back into it on the following title-track, “Silent Assassins.”  A real barn-burner as they say – I’m pretty sure this would be the fastest tempo you’ll find them at so far since the opening tune started up this record.  Hell-bent drums…massive guitars and huge vocals from Tecchio create one of the most intense atmospheres you’ll find on the record right here in this title-cut, giving you every reason as to why it became the name of the album with a masterful display of transitions and seriously professional musicianship & performance.

If anything…for me…although I wouldn’t complain about the sound of the record or the production, which is really spot-on…I felt as if there were a few moments where we missed out on just how incredible a few of the dynamics could be.  Best example I can give you is “Ragnarok,” which has a thick layer of crunched-out riffs overtop that kinda take away a bit from some of the guitar-solos and a whole lot of the fantastic things that are happening on the bass.  So…there’s that…but, that’s really the opinion early on; for the shortest song on the record, “Ragnarok” has some of the best written & defined parts on Mike Lepond’s Silent Assassins.  The breakdown and solos in the middle of this track are stunning…completely stunning.

Probably “The Progeny” that might have impressed me the most from the record.  I think for the length of a track like this to continually keep you interested and pull you along with a whole slew of new sounds and ideas constantly flowing with ease is seriously impressive.  “The Progeny” to me…is the kind of song that will almost always sound ‘new’ to you when you listen to it…there’s that much going on and the ride is as fantastically intense as it is a pleasure to listen to.  Although I was a big fan of the short, tight-ideas of “Ragnarok” – there’s no denying that Lepond does really well when bringing his more lengthy compositions roaring to life.

Case in point…the final tune, “Oath Of Honor.”  If you want to know what ‘victory’ sounds like on a record – I’d say this should give you a good idea or three of what that is.  The longest track on the album ends it all…but the highlight performances come out one after the other as everything from guitars to vocals, bass, drums…they all take a massive turn in the spotlight.  As far as Tecchio is concerned…I found this final track had him at his best…that massively powerful chorus was chockfull of melody and the delivery was flawless with perfect harmonies to match.  At over eleven minutes long – you can safely bet that the ride is as wild as you’d expect…but I still don’t think you’ll hear the tender breakdown and switch of “Oath Of Honor” coming before it gets to you.  A great switch in the sound and a powerful one…like the song drifts between a dream and a nightmare for a moment before heading to a captivating conclusion that the record deserved.

But c’mon…you saw that coming.  They haven’t let you down for a second so far…so why would Mike Lepond’s Silent Assassins drop the ball at the very end?

They definitely don’t…and for you rock fans out there…you’ll be all over this…especially if you dig on that traditional-metal sound.

Hit up these official pages for Mike Lepond’s Silent Assassins!