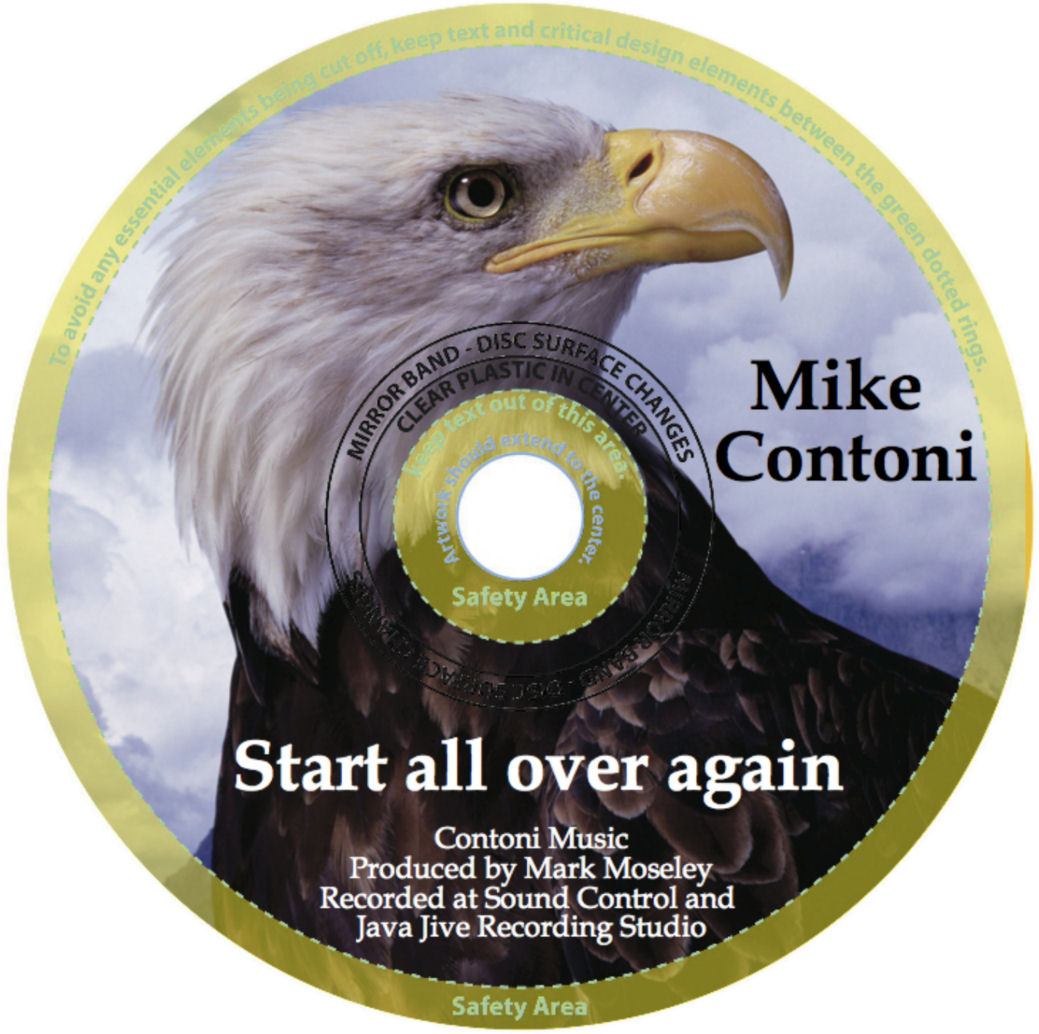 Singer/Song-writer Mike Contoni officially released his new album Start All Over Again at the end of October just about a month & half ago in 2015. An album that truly has that ‘home-grown’ feel to the writing – Mike’s brand of Americana/Folk/Rock tunes approaches music with a gentle tenderness to the melodies and the love of the craft rings-true as quickly as the record begins. Opening with “One More Try” – you can instantly hear the sincerity in Mike’s voice and how genuinely comfortable he sounds in singing this tune and the atmosphere becomes inviting straight-away. So…I suppose what I’m saying is, give him “One More Try!” Besides…for many of you out there, you’ve yet to give him a FIRST try…which, admittedly, does kind of make the opening title a little on the ironic-side…but you get the point; Mike comes out clearly with melody and passion at the beginning of Start All Over Again.

Though for me…I was a little more attracted to where he takes the music in “Peace Of Mind.” Almost a little like…what is that…Crosby, Stills, Nash & Young kind of feel to it? Chilliwack? Chicago? It’s somewhere around that timeline/era for its atmosphere & sound…again, quite comforting. Smooth sound throughout…absolutely stellar guitar solos in “Peace Of Mind” as well – and overall it really has that self-reflective feeling to the lyrics…that search for a calming of the thoughts…that “Peace Of Mind” we all seek at one time or another.

It’s that comforting feeling…that calming atmosphere…the relatable lyricism that you’ll find in songs like “Nuthin Better Than Friends” that really shine a light on the kind personality behind the music. To call him the ‘everyman’ would nearly sound insulting…but I don’t mean it that way; Mike is the ‘everyman’ you truly root for to succeed. There’s a charming way that he sings all throughout this record, but again, one of the performances that I think really reflects his genuine character would have to be “Nuthin Better Than Friends.” I’m typically found well-outside of the Americana genre…but good music well-made is still just that no matter where you find it…and I’m certainly impressed by the genuine ability of Mike to connect to people like myself through his authenticity and relatable-nature/music. So much so…that if you catch the episode of SBS Live This Week posting up tomorrow night on Dec. 11th – you’ll hear more about Mike Contoni and what I think about his music in a spotlight during the show!

“Love Is All We Need” is another solid example of the sweet-sentiment that drives the music of Contoni…he’s not reinventing the wheel here – but this isn’t/hasn’t been about that; he does what he does sincerely…out of pure want & desire to connect & communicate through music – and he’s doing that on Start All Over Again. Great guitar-work and harmonies on “Love Is All We Need” and the chorus swells into that real Americana-anthem that’s caught our captivation again and again throughout the course of music’s history…and I’d expect it to work in his favour too. Very Springsteen kind of feel to the writing of this tune, though of course Mike’s voice makes it a little more invitational than a display of rock-theatrics…he’s subtle, calm & honest in his delivery…and I appreciate that.

The rhythm and guitar of “Wild And Free” stood out immediately – and Mike sounds more confident here. The verse and instrumental parts of the song had incredible power and hook to them…the chorus I felt could have brought itself up just a little more…there’s some excellent slide-guitars happening in there that I thought needed a little more of a role than they were given, which might have made the chorus feel as powerful as it should sound. As it stands, it’s still well-written and sounds great, but it’s slightly outshined by the verse on “Wild And Free.” The instrumental sections of this song are absolutely fantastic…the guitar tones come through brightly and really sound incredible as they bend & slide around.

Perhaps the most single-worthy tune of the album so far, “Anything Goes” is nothing BUT fantastic. I’ve commented several times on the guitar being a strength on this album…but it’s let right-loose here and absolutely shines throughout every time you hear it. The piano added to “Anything Goes” really gives it that Bob Seger or Joe Cocker type feeling to the atmosphere and the writing…absolutely one of Mike’s strongest tunes on Start All Over Again – you can hear the extra-confidence & gritty-rock sound to his vocals on this one…the sign of added enthusiasm, energy and understanding of what the music truly calls for in those moments.

“Pain” has Mike right up in-front of the mix, sounding fully-confident once again through the imagery in his words & wisdom. A little more into the soft-rock/blues vein…it has the melancholy-vibe you’d expect from a song titled “Pain” – these aren’t Mike’s happiest moments or memories on this tune. But not every day is sunshine and this song actually begins its narrative & story in the rain. Great backing harmonies bring the background to life…solid drum hits and twinkling piano-keys help fill in the melody of this slow-jam. At times it feels a little staggered through the lyrics…but it’s a slower-paced tune…pensive and thoughtful until it brightens-up completely in an instrumental mid-section before heading back into the lonely walk through the rain. Questioning life and the “Pain” that comes along with living it…again, Mike finds a way to remain remarkably relatable…I definitely hear where he’s coming from on this one! 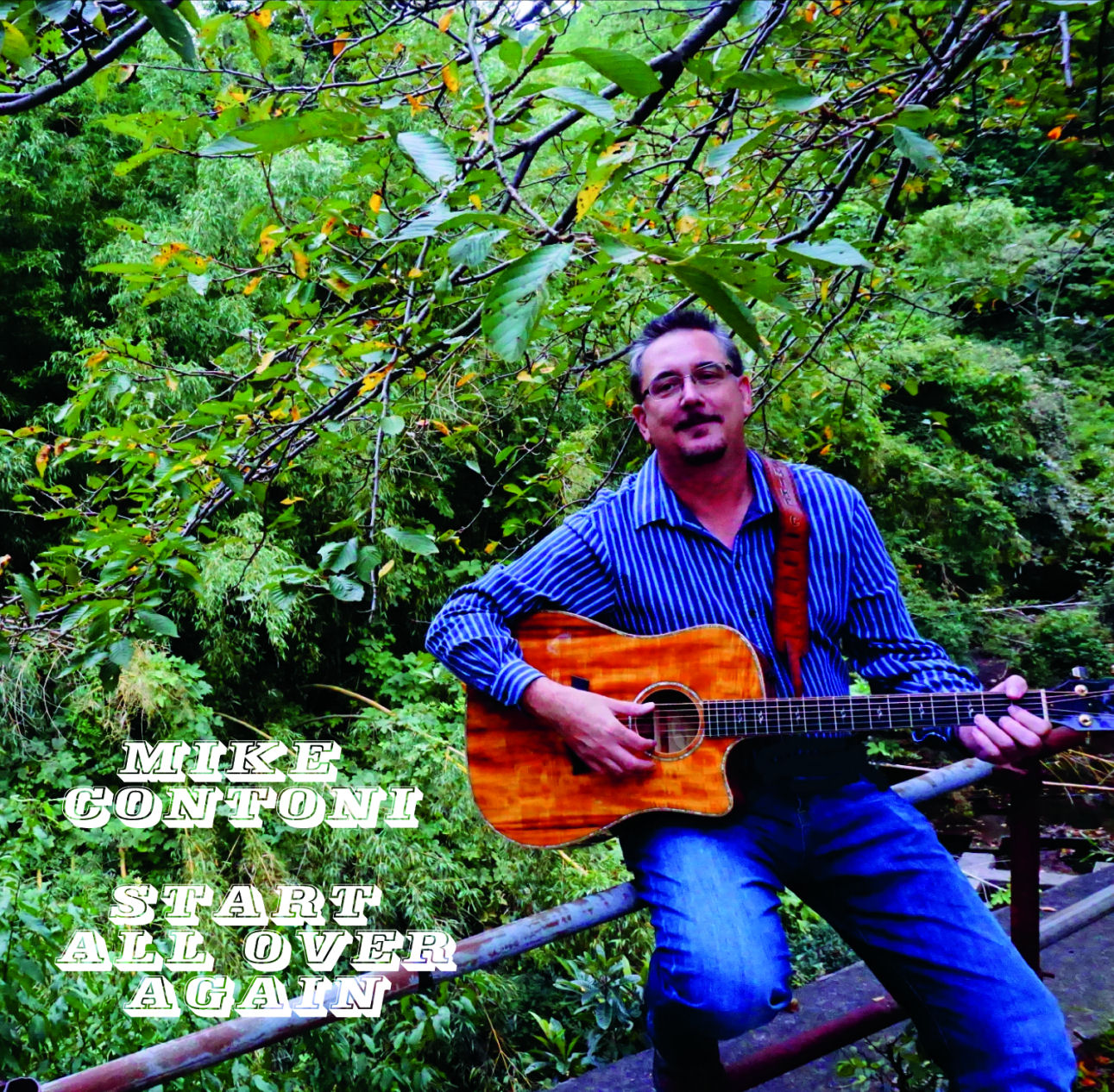 Bending guitar tones and increasing the brightness of his record once again despite the nostalgic-lyricism, “Start All Over Again” tells the true tale of Mike Contoni for all of you to hear. If you’re curious about his intentions…whether he’s in this to head-off towards his millions or not – this song will answer it all for you. Like I’ve mentioned already, there’s a different purpose and intent here with Mike’s music if you ask me. It’s about genuinely connecting to you out there…to ‘make new friends and start all over again’ as the man himself will say in this title-tune. The drums certainly make their presence known…and a KEYBOARD solo! Oh! Mike…ya made my day here with that short little bit of music…reminds me of my old-man…he’d love hearing that; he’s currently the keyboard player in the band Prism of Canadian-music fame and has always made certain that I hear those twenty or thirty-seconds of magic in those keyboard solos…and I still do. Just so happens, this one is played in a very similar style to how my dad would handle it…again, not an ageism comment in the slightest – my old man is a hell of a player and this solo in “Start All Over Again” definitely indicates there’s one hell of a player on this track too. Overall…definitely a song more than worthy of its titular-status…it brings back the comforting tones and inviting, warm sounds where Mike shines at his best & brightest.

Changing it up once again…the production on “Why’d You Go” actually stands-out apart from the rest. I think Mike’s vocals and the music all have a slight-reverb to it…or it’s all spread-out a little more throughout the balance of space…or maybe it’s just a heck of a good song! I think this track brings the rockstar out in him just that 10% more, and the dynamics of the versatility of the music really make this one a wild ride. Excellent solo around the two-minute mark with the distortion cranked-up for a moment before piano comes sliding in to reveal a second solo and increase the melody before “Why’d You Go” breaks down beautifully with every intention of bringing itself back to a roaring chorus once again. Really solid backup vocals once again stoke the fire as this tune blazes on just before the final-cut on the record, “Every Time It Rains.”

Impressively changing the atmosphere once again…the cohesiveness of much of this record comes from the distinct approach that Mike has to his lyrics and the metering they have. Some people will dig-on that more than others of course – but that’s the case for all music…more or less. He’s upfront in the mix quite often, and there’s always a risk in that it can tend to make the vocals become the constant focus. Shifting that to the incredible instrumentation he’s got going on around him might benefit the music more; when he belts it out, he’ll come through clearly in any situation. In “Every Time It Rains” he’s chilled-out the atmosphere completely in this final song…the piano-keys sound like raindrops surrounding him as he sings. He puts in a perfect amount of energy into this last melody and it sends this album off on a true highlight. “Every Time It Rains” was a lot different from the songs heard previously…and that final-switch thrown by Mike Contoni and his crew of talent really give Start All Over Again the memorable ending this effort & album deserved.

Make sure to check out our spotlight on Mike during our next episode of SBS Live This Week – and check out his music & what he’s up to at these links below!