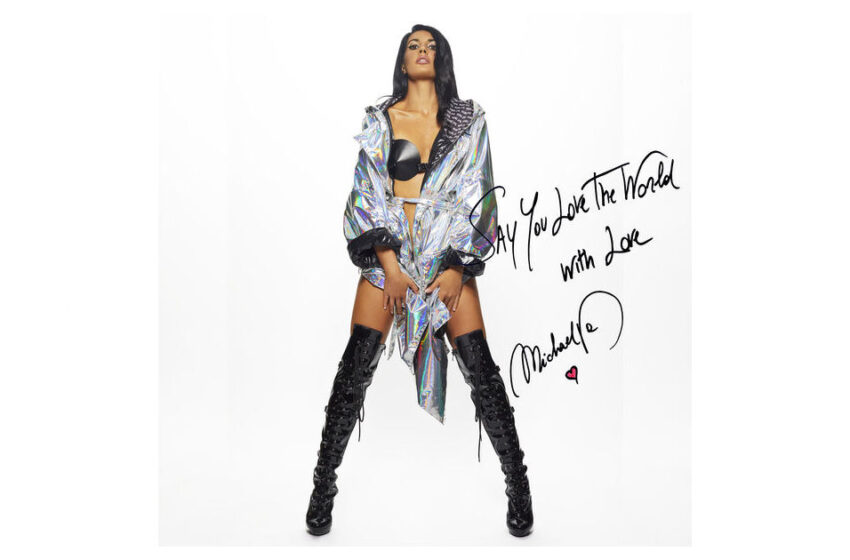 So…like…is that a demand?  A request?  A provocation for our confessions?

I have no problem admitting I love the world Michael Va, consider your wish granted.  Heck, I’m one of those real pesky globalist-types when it comes right down to it, that believes helping others is always a real good idea, even if we don’t have everything we could ever want or ask for at home – crazy right?

There are a couple things that can be, and are true when it comes to this single.  The most noticeable & undeniable part of that equation, is that you can hear the superstar talent in the stunning vocals, charisma, and confident tones Michael sings with – that’s all as clear as day, you couldn’t miss it.  Lyrically – I ain’t gonna lie, I admire the sentiment of “Say You Love The World” for sure – but I also think an opportunity exists here too – we’ll get to that a little later on down the road here in this review…

I’ve got two versions of “Say You Love The World” here, one straight-ahead & plugged in, the other acoustic – and to Michael’s credit, they both come out spectacularly bold, bright, vibrant and rhythmic.  Push comes to shove, you can take confidence in the fact that no matter which version you end up clicking on – or both – you’ll find Va’s performance really stands out, and she’s got a truly stellar voice that is built to thrive in this scene we all share together.  I suppose if you were to ask me personally, I’d probably side with the original version of “Say You Love The World” – it’s not a landslide victory over the acoustic variation, but it does arguably have that much more to listen to & of course, the snazzy beat that comes along with it too…dramatic synth string breakdown…you know, the extra spark that kind of brings the whole atmosphere to life around ya as you listen.  The acoustic version of “Say You Love The World” draws out just how crucial Michael’s vocals are to the success of the song overall – to the point where even when you go back to the original afterwards, you’ll appreciate just how much the rhythm of her vocals really carries this song in either form.  What I like a lot about the acoustic version is that, even though the music itself gets much softer by comparison with just the one guitar backing her up – Michael doesn’t shy away from this moment whatsoever, and essentially puts in a performance that’s big enough to rival what you’d hear in the original at its most intense with all the instruments involved.  So c’mon now y’all – recognize that for what it is – Va’s got a tremendous voice & knows how to wield it with full strength and spot-on tone – you combine that with the fact that she’s got a naturally unique sound of her own, tremendous power in her vocals, and a stylistic approach to melody that works 100% – “Say You Love The World reveals how captivating Michael can be & her genuine star quality in tandem.

So…where I’m a little bit at odds with the lyricism is in the main hook.  “Your love is nothing without your real love for this world…” – the rhythm and the way she sings it is freakin’ fantastic, no doubt about that – but in terms of a vivid description in words…it’s kind of like saying ‘your purple is nothing without a real purple’ – and I just think there’s an opportunity to expand the lyricism in that regard to give us a bit more to hang onto.  No need to toss the melody or the rhythm in situations like these – and I’m not even arguing that the repetition of the word ‘love’ itself isn’t a key to the hook being as successful as it is – it’s kinda crucial really, I’ll concede that.  But I’m sure Michael gets the point I’m making – description & detail in songwriting is almost always beneficial.  In this particular instance of “Say You Love The World” we get what she wants to say – believe me, it comes across plenty clear…lots of lovin’ goin’ on here that ya can’t miss – Va’s in a loving mood and you will definitely know that for a fact by the end of a single spin.  And who can blame her?  I’m not gonna argue against the sentiment of this song – are you?  It would take a special kind of grump to take on a song with pure intentions like this one has, and that ain’t me.  I just call things like I hear’em – I felt like if I was to write this out on paper or create a word-cloud based on what comes to mind when we listen, LOVE would come through as bold as bold can be – all that tells me is there’s space that exists for other words to live in; there’s no rules that says this has to be the case & it’s nothing more than an observation that Michael is free to take or leave for the future to follow.  You could also argue the case that when it comes to the hybrid R&B/Soul-Pop she’s workin’ with, you don’t wanna potentially over-complicate things either, lest the people out there not dance as they’re intended to – and in that respect, you kinda gotta hand it to Michael for keeping this track as tight as it is, and delivering a track that people really will wanna get up and move to on the club floor.

My gut tells me we’ll mainly take away two things in listening to “Say You Love The World” – and that we’ll all take them away universally.  One being the main hook – full credit where credit is due, whether or not you love the lyricism or not aside, the rhythm is massively accessible, and you’ll completely remember it tomorrow, if not be singing it around the house for the next month straight.  The other thing is superstar talent – Michael Va’s got it, and there’s really no doubt about that whatsoever when you listen to the powerful performance she puts into this single – she COMMANDS the microphone, and I absolutely love, love, LOVE hearing this kind of confidence in an artist that’s still well on her way up and at the early end of her career.  That tells me she’s got a very bright future ahead of her – I can hear that without question – Va’s got the kind of strong voice that grips you with passion & sincerity & sparkling tone…she’ll be embraced on her own for sure as a solo artist by many listeners all around the globe, and I wouldn’t at all be at all surprised to see her become a majorly sought-out voice to make a guest-star appearance in the hooks of other band’s & artist’s music out there.  She’s got a uniqueness to her vocals that is going to be an incredible asset to her future career & lead her straight to number one – remember you heard it here first!

Find out more about Michael Va at her official website at:  https://www.michaelva.com