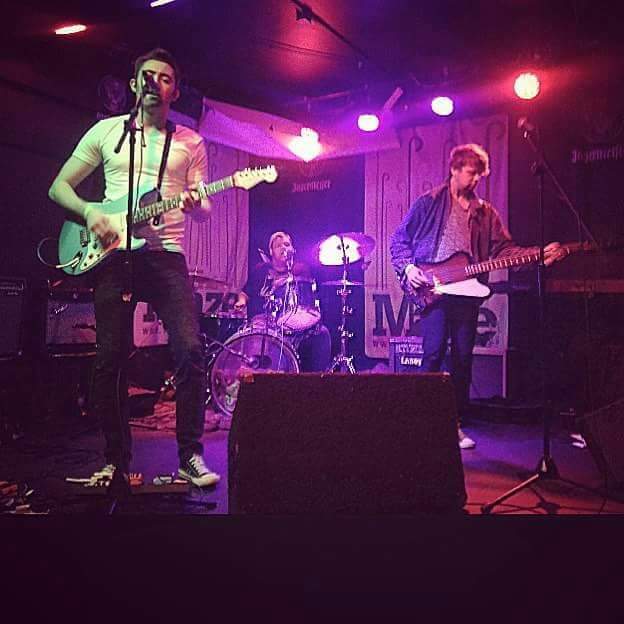 I have always liked this guy.  One of the most inspiring stories in the subtext of music is watching a ‘me’ thing turn into a ‘we’ thing – and singer/songwriter Michael Reddington, hot off the release of his last critically acclaimed EP You Find Out On Your Own, has done that very thing.  It seems that not only has he kept himself busy since that last record – he’s taken on a full supporting band to help bring his music out in an entirely new way whereby he doesn’t have to rely solely on himself anymore, he’s now got a full band, who go by the name of The Echoes.  Together, they’ve just released their debut single as a full-fledged project combining & highlighting the best of their talents, skills and abilities as Michael Reddington & The Echoes.

Joining him now are players Akeem Broderick on the drums and Jim Allen on the bass…and together they’ve made themselves an extremely tasty, colorful new-tune on the single “Green.”  While Reddington still employs himself as the guitarist & singer for this brand-new line-up – notably, he’s now sharing the songwriting amongst the entire band and allowing for that input to expand the sounds we first discovered on his previous EP.  That’s a SMART move!  The last impression I’d ever want to give you is that Reddington really required any help when it comes right down to it – sleepingbagstudios was certainly among the critics singing the praises of his last record – but it’s also undeniable that this new single brings a lot more power to the music and sound of his vision overall.  Have you ever tried to fix your own sink when it’s been jammed, or power-outlets when they’ve failed?  Probably not…and there’s a reason for that; we’re not complete experts at everything life throws at us…but there are people who ARE.  Michael has made a smart move for his music and career through this expansion, taking on people that clearly know their instruments and how to play them brilliantly…experts from their own fields really.

The result is the debut-single “Green” – which, while it still possesses the entire magic of Reddington’s staple songwriting, melodies and sound – is still a song you can hear that the other players have had the freedom and input into the material to bring it all to the next-level.  The drums are well-written and perfectly played – the bass is movin’ & groovin’ throughout the entire jam; Michael hasn’t just made a good decision here, he’s made a great one.  Again…not taking away from the previous EP which we loved – it’s still a large task to take it all on his own in making a record…and I think he’s truly made a move that is so perfect for himself and his music that you can actually hear that the extra gears have all clicked into this place and this music he makes is now truly ready to find itself on the move.  It all just sounds thicker, fuller, more-realized than it has in the past…and all really sounds as ‘together’ as it should.  If anything…it just barely starts to walk the fine-line of almost too-full…Reddington’s voice is right at the threshold and enveloped right inside the music now that it’s all as thick as it is.

But like I’ve said…it’s just on the edge…and there’s absolutely nothing wrong with that.  Having those lyrics set a little bit further back in the mix often results in a larger sound to the overall music surrounding a voice – and that’s the case here on “Green.”  This single sounds BIG in all the right ways – and Michael’s vocals break through the music just slightly above the music surrounding him with more than enough power to establish the clarity we need to hear him with as listeners.  Dealing largely with our society’s need to constantly comment and judge other people, their art, their lives and opinions unfairly – “Green” is a great reminder that quite often, silence is a much better attribute to a human-being than an off-the-cuff remark or opinion we can’t back up with any kind of real facts.  The song itself still possesses ALL of the magic of Michael’s previous sound, his ability to bring out beautiful melodies on the inside of Alternative Rock & Indie music – it just all comes out sounding more powerful than he has in the past which much of the credit going to the new players in the band for bringing out the best in his music and completely adding to the sound.  There’s not a negative to be had in his new pursuit…I really do think he’s made a solid move with adding to his band, sound & style…this is truly a case of doing what’s right for your music and career and what it sounds like when you’ve found exactly the right players to help you realize your full potential.

Definitely proud of the guy.  I’ve always expected that any return to his music on our playlists here would only ever be a good thing – but I think this new, richer, fuller, bigger and brighter sound that he’s brought into the music can only lead him further down the right path he was already clearly on.  Always a smart move to let the music and musicians breathe life into their own parts…and no band ever really thrives in a dictatorship; Michael already clearly knows this and has chosen the better path by affording these new members Akeem and Jim the freedom to find their own place in the music, which they certainly have.  It’s also really allowed Michael to bring out some of his best guitar-work to-date with a solid line of melody throughout the verse & chorus, but also some of the most excellent solos we’ve heard from him are right here on “Green.”  That’s one of the benefits of a rhythm section you can truly rely on – and I think he’s certainly found that with The Echoes.

Love the way he sings this song…full of sweet, brightened-hooks in the music that provide a bold contrast to the lyrical content – it’s all still incredibly true to the sound he’d been delivering in the past, but he’d still been searching for a way to translate his vision to something even bigger.

Wait a minute…I said that wrong.  THEY have done that now…together.  Michael Reddington & The Echoes have made a completely solid tune with their debut “Green” – and keep in mind this is just the very beginning!  Can’t wait to hear how this new twist on his sound continues to develop – they’ve all got a great thing going here in “Green” – a track that truly sounds like each player is right at home and comfortable in the music they’re making.  A great start already through this new-single…and the potential is even greater for where this project can take them all now, as an entire band full of dedicated & talented musicians looking to find their way to the top.

Have a listen to the brand-new song “Green” below!

Check out the new tunes as they come out, along with Michael’s previously released tracks at his page at Soundcloud:  https://soundcloud.com/michaelreddingtonmusic