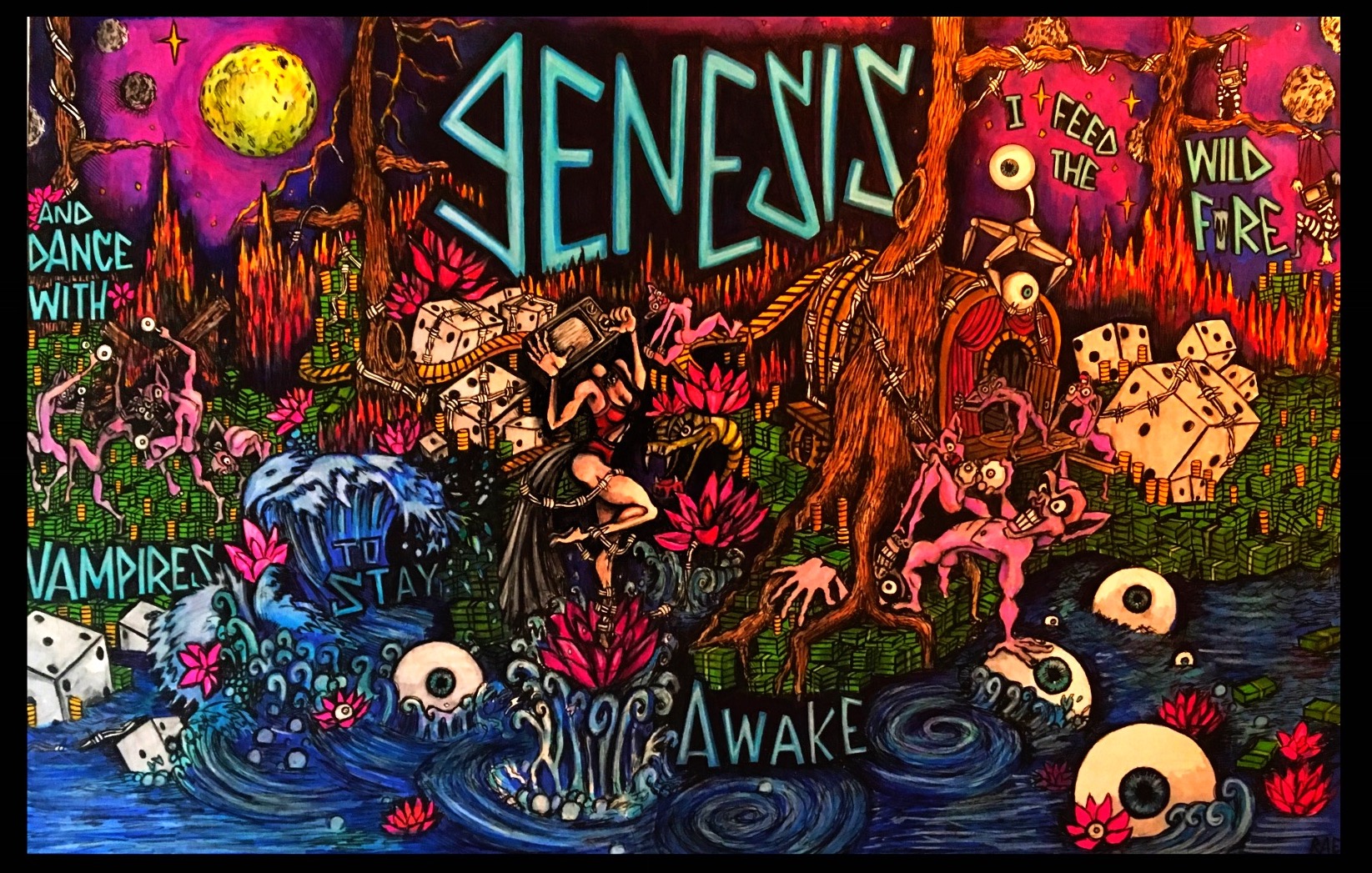 Well now!  Month of May, so far you are pleasing me greatly.

There are some names out there in the independent music-scene that I can’t help but get excited about when I see they’ve got new material…some artists & bands are synonymous with quality and this month has already seen three of my favorites out there come back to us all.  I just reviewed the new record Building A Building from the heavy-grooves of Yellow Paper Planes, I’ve got this new single from the ever-reliable Mercury & The Architects called “Genesis,” and later on this month there’s an entirely new release from A Truth Called Nothing, who made my top-ten list for our Best New Sound just last year in 2016.  I haven’t checked out the latest offering from ATCN yet but I’ve got no reason to doubt the creativity I’ll end up finding there…so far between Yellow Paper Planes and Mercury & The Architects and the new music I’ve heard, I’m feeling absolutely justified in my excitement surrounding the music these projects put out.

Anyhow…I’ve already talked about Yellow Paper Planes this week and I’m not ready to talk about A Truth Called Nothing yet – so you got it, Mercury & The Architects is the quality name from the independent music-scene that we’re examining here today.  For those unfamiliar with the music of our subject in question – Mercury & The Architects released one of the most important songs of last year in 2016 with “Shoot The Music Down.”  Not only did the song make massive social commentary along the way – it stood out for all the right reasons through its writing, performance and production.  It also raised the bar of expectations for anything else to follow, way, way up.  As much as I try to prevent that from happening in my mind…sometimes a project, artist or band really IS that good…a reviewer can’t help but be that much more excited to see a name they know is intensely reliable for quality tunes.

As I’ve mentioned and as I’m sure you’ve picked up on by now, Mercury & The Architects is one of those names you can rely on.  The new single “Genesis” actually worked out really well for this project…I only say it that way because living up to the standard set by “Shoot The Music Down” in my mind, was nearly an impossible task – but I’m really stoked on this new tune.  The first thing I noticed was that “Genesis” had a bit more of a beat & groove to it than I remember Mercury & The Architects having the last time around…and with the extraordinarily smooth way “Genesis” was flowing from my speakers here at sleepingbagstudios, I couldn’t help but notice that the accessibility-factor in the music has also gone up.

It’s almost like a low-key cut from The Killers…but with like, an even more pronounced influence from post-punk/new-wave…and then you know, like, lyrics that make some form of actual sense and really mean something.  In terms of accessibility, not only is the music of “Genesis” more enticing to the ears than perhaps what we’ve experienced already in the past – but on this particular cut, the lyrics are much more layered in their depth and not nearly as direct.  Hmmm.  I don’t like the way that sentence comes out…it’s correct in what I want to say but it’s not going to be taken that way, so let me explain; “Genesis” is still just as pointed of a song with what it has to say if you’re familiar with the band, the music & the themes/ideas that drive the material – but the real accessibility here comes through dialing-back the directness to create lyrics that allow for people to add their own meanings to the words of this new tune.  I have my theories for certain…it definitely sounds like “Genesis” is making multiple points about the current administration in the USA…you can hear references to security, business, martyrs, walls, borders, too big to fail, learning to swim, feeding the wildfire, empires, vampires, Muslims & Christians are mentioned as well…there’s a lot here to really get right into lyrically and I think that’s one of the best parts about writing in a less-pointed direction.  Maybe I’m totally wrong…I don’t think so…but it’s possible – the main point being that for much of the song, you’d be able to form your own opinions on what’s being sung and how it would relate to you in our world today.

I could also be wrong about my theory about the song’s ending…or sorry, not the ending but the ending of the rapped-verse in the final-third of the song, which is where things become the most direct & revealing lyrically.  But when we’re thinking in context of the word “Genesis” and its general implications of starting something anew or an entirely different beginning…then I think that you could look at this song in two different ways at the very least and get a ton out of it through both.  You could listen to this with the sense of dread that a new form of “Genesis” is truly here…one where business is king and vampires are people that feed on emotions and genuine human-feelings…and you could listen to the song for the most-part and absolutely gain the insight from the tie-ins pointing out that if we LET IT happen…we could be headed down a road of real trouble for all.  In that scenario…which I think honestly dominates much of the mood of the atmosphere on this new tune from Mercury & The Architects…but if you’re really listening….the key insights really come shining through at the end of the rap-verse…

“Here is the blueprint, go make some music and go tell the world that the world is one.”  Alright, so, perfect example right there…I’m just assuming that’s what I hear…it could actually be ‘go tell the world that the world is won’ at the end at it would potentially change its meaning once again.  Clever choices in lyricism are no accident for Mercury & The Architects however…so it’s truly a ‘take it how YOU hear it’ scenario; it’s a way of finding out things about yourself you didn’t even know existed, but HOW we hear a song and what it says can quite often say much more about us as listeners & as people than it does anything about the song’s original intentions.  But from my own perspective…”Genesis” really shows here in its lyrics throughout the rap-verse that the fight is long from over – it’s just beginning; and the light of hope that still burns bright inside of Mercury & The Architects has far from gone out.  The whole point, to me, became that WE the musicians, we the listeners, we the people are the “Genesis” required to fight the battles ahead and that music itself will be what makes the difference.  In which instance…if I’m right at all…the theory certainly balances out the dark with a healthy dose of empowered light right at the end of the words in the verse around two-minutes thirty-ish.  After which point, you still get another solid rip through music that has just as much hook in the flow of the words as it has in the dynamics of the sound of the instrumentation.  “Genesis” beautifully weaves together smart samples with electro-rhythms to create something that echoes with power through its layers of sound & true depth through the lyricism.

Another resounding triumph for an incredibly reliable & thought-provoking project in music I can only hope is being noticed by many more people out there than just me.  Mercury & The Architects consistently make music that’s every bit as entertaining as it is rewarding to listen to…whether you dig the beat & melody on the surface-level or you dig deep right into the possibilities of the lyricism & themes within the song…one way or the other…or more than likely both, believe me, you will dig it.

Support Mercury & The Architects and find out more at the official Facebook page here:  https://www.facebook.com/mercuryandthearchitects/