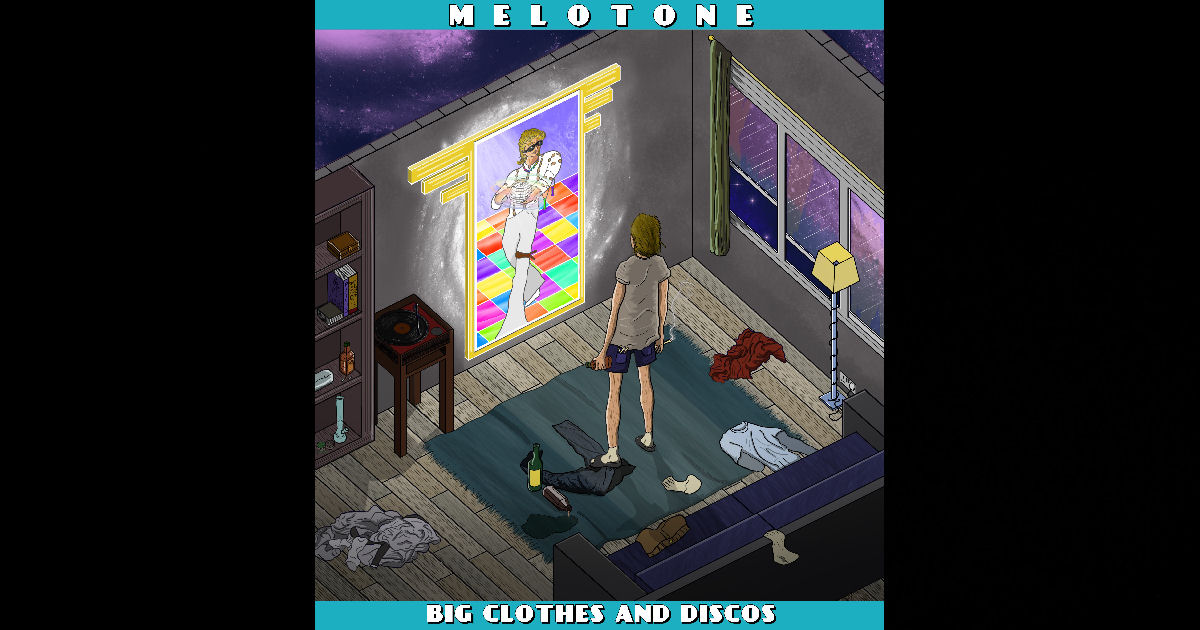 …I feel like I’ve probably been waiting for Melotone to come along longer than they’ve probably been around for as a band!  That’s probably more on me for being old than them being new, for the record.

But I remember going to this show back home in Vancouver, BC…probably about a decade or so ago now, at the infamous Commodore Ballroom…I was there to check out She Wants Revenge with a couple friends from work.  Headlining the bill, they were supported by three other bands that night…two bands called The Switches and The Virgins that I didn’t know, and one other that I had heard rumblings about called Be Your Own Pet.  The entire night turned out to be like…beyond ridiculously memorable for several reasons…each set had its whole own deal goin’ on and the lineup overall had these acts riding on the fringe of each other’s sound, not necessarily right inside their genre – you following me?  Those are my favorite kind of shows and the ones I always encourage others to play as often as possible; winning a crowd over on home-turf & with similar acts is a fairly easy task – but doing it for an audience you have to somehow convince to love ya, is a whole other deal.  The Switches separated themselves opening the show by having the lead singer sitting cross-legged on the floor of the stage for the first three-quarters of the set…which was odd to say the least, but the music was rad.  The Virgins came on…and in my opinion, stole the entire show by far that night…quality material with insanely vibrant hooks that were as catchy as they come, some funk in the mix, some pop-tendencies, some indie sound…I loved everything I heard – with the exception of the mix in the club that night.  I consider it one of my rare gifts to be able to hear what’s happening in a band beyond the sound of a venue…and I knew, for a FACT, that The Virgins were slaying it that night despite the wall of noise the dude at the boards for the Commodore kept making them become…and I rushed to the merch table to buy the two records they had out at the time.  Then Be Your Own Pet went on and found their way into my top three worst experiences I’ve ever had in seeing a band play live right afterwards, with the climax of the entire story being that they literally played SO BAD that night & so loud, that they caused my buddy to throw-up right at the table we were sitting at from the bass rumbling his stomach.  And likely the Heinekens.

Anyhow…She Wants Revenge played a great set too…no complaints there…well worth the dough.  The point of this entire long-winded story, is that I became massively addicted to The Virgins from that night on, and still am proudly to this very day.  But in all my years here at sleepingbagstudios since then, I’ve yet to come across a band that quite had that same wild spirit & fun sound wrapped into such brilliantly funked-out music & undeniable catchiness – and now I have – Melotone is what I’ve been waiting for, for oh-so-very long.  I felt like I got CLOSE when it came to meeting the band Magik Spells years back, but they were still a bit too rough around the edges at the time I knew them…perhaps a fairly similar amount of energy and willingness to bring the Funk into Rock or whatever they were working with next – so as far as an independent comparison to Melotone goes, you might find one there too.  Ultimately, this is my extremely roundabout way of saying I love what I’ve heard in every one of these bands – Melotone certainly included.  They’ve got bands & projects like Vulfpeck, Anderson Paak, and Zeppelin in their listed influences on their social-media pages…and you’ll be able to hear many of those vibes show up as well in different ways…probably a little less on the Zeppelin-side on this particular single, but I get where they’re coming from and I can hear that in their sound & the way they play.  The point is, they ain’t wrong about where their own sound is culled from, yet they’re not trying to be like anyone else out there either, which of course I dig too.  “Big Clothes And Discos” is the kind of raw connection we all seek out & crave in music…the kind of catchy creation that takes a band right over and gets every player right into the groove…the kind of track you can hear comes out great in a recording, and likely reaches even further heights when played live to an audience.  It’s got the energy & charisma that gets people moving right to the front of a stage to see what the heck is creating the awesome time they’re having & who’s responsible for it.  Highly, highly impressive stuff, considering this is their debut single.

Why I think these guys are gonna do great out there is the sheer balance of strengths & skills you’ll find shared between them and the diversity you’ll find in their clever fusion of sound.  I also highly suspect that the Melotone we hear now ain’t gonna be the one we hear ten years down the road from now either – this is the kind of band with the creativity & talent that’s going to evolve their sound rapidly in pretty much any direction they choose to take it, but make no mistake, they’re already crushin’ it.  Each member of the band will get their own moment with ya…I can guarantee you that…when you’re listening to “Big Clothes And Discos,” each instrument will catch your attention at some point in time for the awesomeness it’s bringing to the overall song…vocals included in that too of course.  You’ll notice the hooks comin’ at ya from all angles though…right from the drop Peter Carey’s guitars immediately pull you right in…chances are the next thing you’ll notice is the incredible personality on the mic provided by Alec Madely.  And all the while, whether you finally come to realize it on that first spin or the next several later, the rhythm section of Ant Nicklin on the bass and Ed Pearson on the drums have been rippin’ it up the entire time as the unsung heroes of “Big Clothes And Discos.”  Like I said, I have no doubt that they’ll further refine their sound even more over time, but recognize how impressive it truly already is – Melotone as a band, is highly innovative, inventive, and all-out malleable in their music, bending the pace, movement, & groove of “Big Clothes And Discos” to their will confidently at all times.

That confidence you hear…the wild entertainment factor…the solid musicianship…the enthusiasm – it all fits…everything I’m hearing on this single suits this band extraordinarily well – and dammit, it’s FUN!  “Big Clothes And Discos” has got the JUICE – everything from wicked harmonies & backing-vocals to instrumentation that continually makes just as much of an impact as the radness of Alec on the mic does.  I mean…LISTEN to the solos & awesomeness they discover around the two-minute mark…or how they bring it back with such a smartly controlled insanity & intensity…just that right hint of psychedelic sound in the mix here…you can almost hear the Punk-Funk spirit of the early Chili Peppers’ music here…the way back stuff, pre-Blood Sugar Sex Magik, long before they’d gone irreversibly commercial.  Back when it was still pure…the result of guys that got together to make music for the sheer purpose of the joy it brought them and the way it made them feel alive like nothing else could…that’s the exact kind of vibe I’m getting from Melotone’s “Big Clothes And Discos” and the reason I’m excited about where they could end up going with their music in the future.  Lots of possibilities and promise for a band like this – they’ve made a great impression on my ears & I’ve got no doubt they’ll do the same with yours.

“Big Clothes And Discos” comes out officially on September 21st this year – be among the first to hear it with your ears by keeping your eyes on their page at Facebook for details here:  https://www.facebook.com/MELOTONE.UK