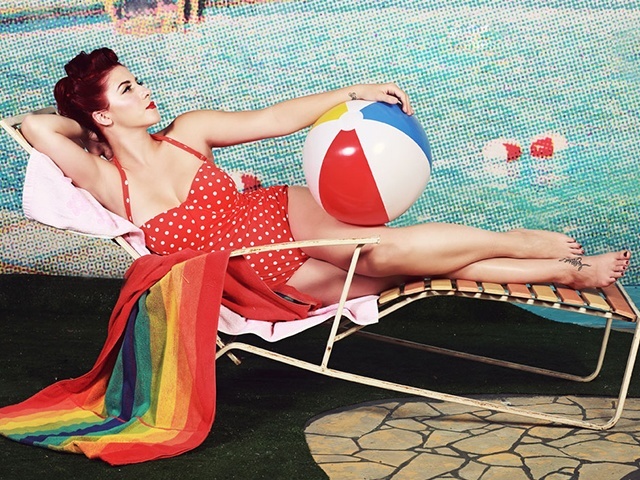 A short, dramatic tune from Pop/R&B/Soul-singer Mel Monaco with her new song “Single Again;” in a powerful & edgy tune…the theatrical nature of the performance and music will grip you firmly. There’s something nearly Amy Winehouse-ish about the song…and overall it’s a cleverly written song that plays with both the light & the dark and it all swirls into one sonic-reality on Mel’s new track “Single Again.”

What scared me slightly at the very outset of this song quickly dissipates. As Mel begins the verse for “Single Again,” she takes on an entire mouthful of words in the opening moments…and…it kind of sounds like it’s right on the edge of giving her trouble. Like a car going through the last moments of a yellow light before it turns to red…Mel rips through these words as quickly as possible to keep up with the metering and flow, just getting through the lyrics in time for the next. It’s clearly not anything less than complex; the vocal-rhythm and flow is not an easy one to navigate or take on…and at that very beginning you quickly wonder if Mel will snap to the beat and take a word or two out over the following verses in order to give herself more than a chance to actually catch her breath for a second.

Those fears are resolved almost as quickly as they began; any trouble spots seem to occur only within those first moments…and half of that is on us as listeners as we attune our ears for the ambitious, large-scale tune she’s about to take on and the whirlwind of lyrics coming our way. I still think it’s there…but truly, it’s minor…and from the moment the first chorus comes in and Mel’s vocals truly start to soar into gruff-but-golden tones, “Single Again” becomes sharp, pointed and crisp, snapping to the beat and working a sultry-magic through its rhythm, mood, vibe and lyrics. She floods the mic with confidence and an all-out approach…the music is full of big-beats and synth sounds that fill the background and set the stage for her dynamic vocals. The tone and power in Mel’s voice is a real force to be reckoned with…she really has a great sound and tremendously unique qualities in her voice.

Overall through the rhyme-scheme, rhythm and flow of “Single Again,” Mel Monaco has certainly found a potential hit-song here. Very well-written effort and a true-testament to what ‘captivating’ means as far as describing music is concerned…there’s something incredibly hypnotic about this mesmerizing track that truly pulls you right into it. And once you’re there…like I am now…there’s not much else you can do but really take this in and marvel at the commitment in Mel’s performance. Definitely a powerful voice and one I think will really go on to potentially do some incredible things…errrr….well…more-incredible that is…”Single Again” is definitely worthy of that title as far as a first experience is concerned over here on this side of the speakers…you know what I mean.

It’s got style, it’s got intensity and as much melody as it does passion on display – “Single Again” is a pretty damn thrilling ride as far as music goes really…it definitely puts you right into Mel’s world for a moment and takes you right out of your own. Captivating…just like I said already…but she owns that magic so well on “Single Again” it’s certainly worth mentioning to you twice.

Find out more from her official page at: http://melmonaco.com/