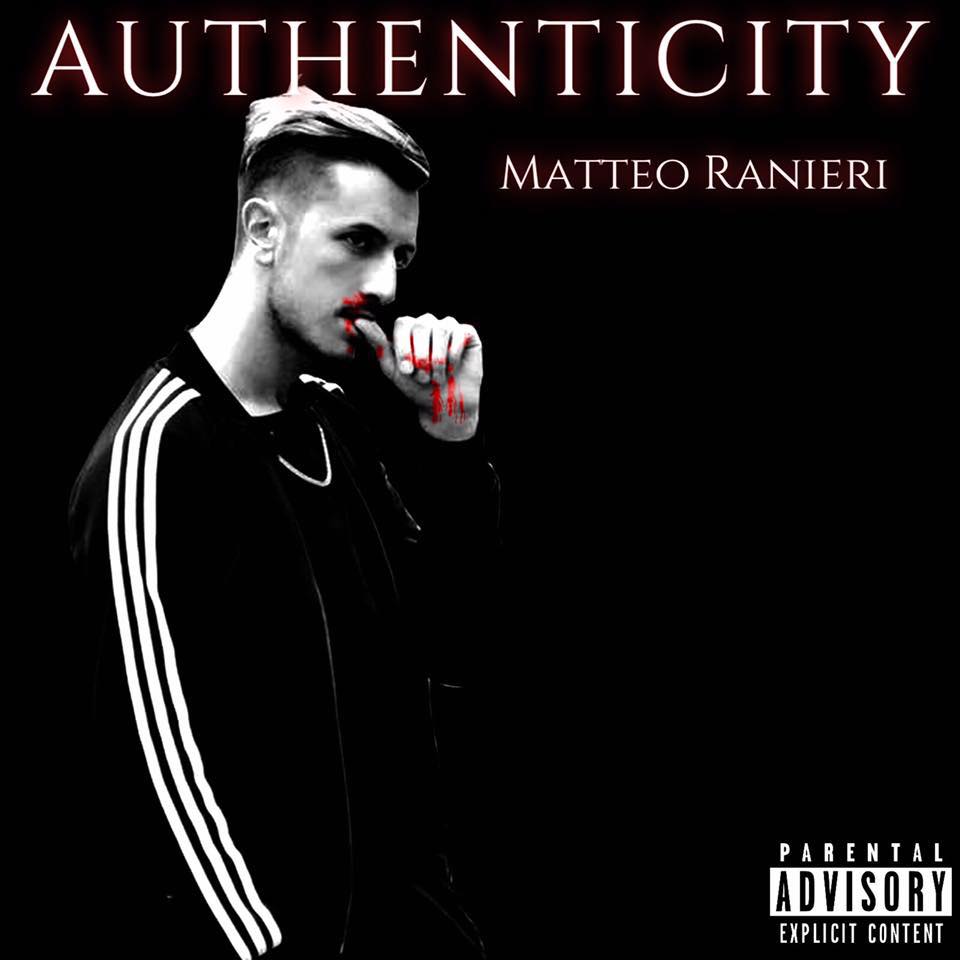 When you read about the story behind the music of Matteo Ranieri, you learn that he’s grown-up as a classic pianist/jazz singer before finding his way to the brightened pop-sound you’ll find on his Authenticity EP.  A solid combination of ideas & execution…Matteo’s got some unique stuff on this EP…good timing considering the title of it all.

Authenticity.  A hard thing to achieve and bizarre considering we’re all born with it to some degree.  In breaking away from what he’s known before and combining the experience with an all-new sound for him, pass or fail, you’ve gotta admire Ranieri for pursuing the style of music he wants to make.  While he might still be searching for that true direction here in the early days of this new pursuit, Authenticity still showcases many vibrant ideas and has quite a few exciting & electrifying moments.

With a low-down low-end heavy mix with the big-bass beat of “Authenticity” starting the record off right – the music comes out sounding impressive in the depth of production & mix on this opening tune.  I liked the verse and the vocal-flow to it…and for me, that was the main-star of this first cut.  What I felt like “Authenticity” might have been missing was a little bit more power & pride in the chorus.  It still works well enough mind you – but that moment…that proclamation of “Authenticity” seems to me that it should have come up in energy, summoning the confidence of this moment in time and have Matteo really emphasizing his arrival and presence.  Could just be personal preference…but I always feel that the energy in the music & message has to have that cohesion…in that respect, I felt comparatively to what we hear later on in the EP that this first cut held back a little more than the rest do.  That being said…”Authenticity” DOES have what ends up being my favorite breakdown on the entire EP…there’s still plenty of positives in this opening cut.

“Ex” is a well-written tune…I think the ideas are solid.  I would have liked a bit more brightness to the tone in some of the vocals at points in the chorus like you hear Matteo do in the verse.  On both these opening tunes, he’s given himself a proper platform in order to be able to have that ability to establish a connection to his style, skills & talent…but with more or less one-word choruses in both cuts – it makes it very difficult to properly stand-out.  More importantly, with less going on lyrically, those words need to come out as confidently and punchy in the mix, if not more-so than what’s happening in the verse…so if there’s one-word providing the hook, it’s gotta be delivered like the entire performance depends on it.  So…writing & idea-wise, I like what’s Matteo is up to here on “Ex” – but he’s got a dynamic range to his vocals that you’ll hear more on the later-songs on the record that I think he could have added more into these first two cuts on the EP.  Still good tunes…but it becomes apparent that Matteo has more to give as Authenticity continues.

Namely “Don’t Make Me Think,” which is dead-center of the record and a real switch in confidence, approach and strength in tone.  I felt like the final three tracks on this EP got a lot closer to the mark and showed Ranieri is clearly on the right path.  He tries different things from here on in…things that indisputably work from every angle.  LISTEN to the way “Don’t Make Me Think” starts out with its electricity pulsing and piano-hook…Matteo sounds fantastically confident in his delivery here and the chorus…THIS…this is what I’ve been trying to say…he’s given himself that platform to express himself in-full here on “Don’t Make Me Think” and we really get a clear taste of what he brings to the microphone.  There’s passion, emotion, energy and tone in the flow like we’ve yet to experience on the EP as Ranieri makes a bold switch into confidence on “Don’t Make Me Think.”  Clever track really…that piano-hook is probably a walk in the park for him to play but it’s massively effective…the backing sounds in the music are vibrant and ALIVE…there’s great atmosphere on this middle-track of the EP and I really felt like it marked a switch in how these final three songs are performed.  Matteo sounds great on “Don’t Make Me Think” – certainly the best we’ve heard him so far throughout the EP as he rises to the occasion to bring his best out amongst a musically-solid composition backing him up.

When he lets himself right into the moment and he’s really feeling those words he’s written, Matteo sounds powerful, bold and empowering.  The delivery on “Survive” is severely impressive at points…I think there’s a great mix in the approach with Pop/R&B sensibilities that are noteworthy.  The sweetness is the part that works…and for the most part, that’s the sound that dominates “Survive” overall; if Matteo sticks to THAT…things are going to be A-OK for him.  However…I think there’s a fundamental struggle in the writing right now that’s going to need to be resolved if he’s going to find the true direction he’s looking for.  As in…there’s not much point in putting out your sweetest/happiest-vibe on the track and then referring to ‘these bitches’ out there…know what I mean?

Again…music/words…the combination needs that cohesion and right now what I hear is a sincere delivery on some fairly insincere words here…it’s tough to believe that Matteo agrees with everything written here when some of the words seem to be not as focused on the melody they’re being written for when they wander out of context for moments like that, especially when 99% of the rest fits the idea, melody, tone & atmosphere spot-on.  “Survive” easily has one of, if not THE, strongest choruses on the record and I think the unique way he’s sung this one out sounds empowering & rewarding to listen to.  So…even though I know we’re trying to keep it real with the references to the ‘bitches’ out there…I think the better play for Matteo in the future is to take the high-road…he sounds too sweet in his tone for the most part to really feel like the ‘hard’ parts of the lyricism can be taken at face-value.  He’s got a choice to make for sure…which is he can easily go after the sweetened tones and melodies and potentially be crowned king…or he can battle it out as he mounts a chip big enough on his shoulder to sound mean enough to make moments like pointing out the ‘bitches’ out there sound convincing.  Just depends on what side of himself he wants to project & portray more in the music…it’ll be interesting to see which direction he takes his style in the future.

“#SummerIsComing” already comes with its own social-media tag & campaign built-in.  We’re getting to this one finally here in the fall-season of Canada…but technically speaking, he’s also not wrong even though we just completed the hottest part of our year.  It will come again.  Much like Game Of Thrones seems to fear winter…I’m the same only in reverse…so for me, it’s not that ‘Winter is coming’ so much as “#SummerIsComing” when I’ll sit inside for nearly its entire duration with the AC on full-blast avoiding the sun.  Anyhow…

The final tune is fully-edited to the nines and has a huge, rubbery low-end bass-beat driving the music alongside wildly flailing electro-elements all bursting into the mix.  Up-tempo, danceable, confident and well-sung…I think he’s got himself a solid hit here at the end with a large degree of accessibility built in.  Fans of EDM, Dance, Electro, Pop & R&B will find something for their ears on “#SummerIsComing” – I think he’s got great pacing and dynamic lines in the lyrics that stand-out & really pop on this one.  Matteo’s backing vocals are excellent…in behind the lead he’s often reaching for the stars with even bigger notes…and that helps to fill in the sound of “#SummerIsComing” as well.  It’s an energetic, smartly edited final tune that has Ranieri again testing out unique ideas and combinations & finding something that works well for him.  He’s tested out several directions in these new waters of electro-infused Pop/R&B and most of them are working solidly in his favor…I have every bit of confidence in Ranieri & every reason to believe that Matteo will go on to further refine his sound to achieve the exact perfection and balance he’s looking for, but this is a great start.

Find out more about Matteo Ranieri at Spotify:  http://spoti.fi/2d5T2cq