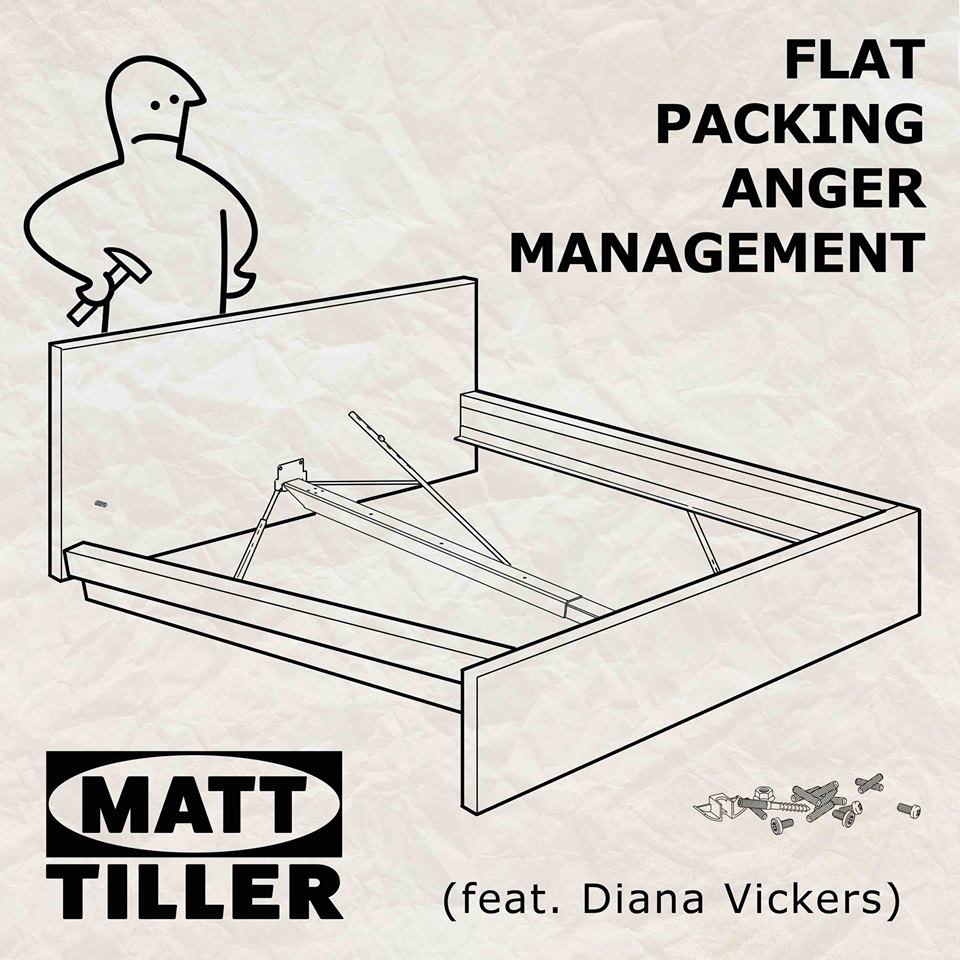 Had to quickly check what I was listening to when “Flat Packing Anger Management” by Matt Tiller started-up…wasn’t sure if I had clicked the right song or if I was about to listen to a cover of Radiohead’s “High And Dry” during the initial chords that burst out at the beginning of this new tune.  To be fair…it ends up quickly departing from any similarities; checking out the rest of the music on his record A Short Album About Stuff…he’s definitely much more based around a folk-music thread.  Even though there’ are elements of rock & pop in the previous single “We’re In This Together” – Matt definitely still has that indie/folk approach to his writing that drives the music underneath it all.  You get a real sense from a track like “We’re In This Together” and its uniqueness that Tiller is certainly a natural performer – and like many folk-artists out there, sounds like he’s able to utilize his time in music to also create solid narratives with quick-asides in the lyrics that make it all sound more intimate & personal.  The use of humor works well in his favor on this chilled-out & easy-going vibe Tiller created in his first single…you might not catch every word due to speed, volume or accent – but believe me, some of the lines you DO catch will certainly uplift an eyebrow or two…

Featuring the absolutely stellar vocals of Diana Vickers – Matt Tiller’s new single is written as a duet of sorts with each vocalist trading-off the microphone duties to the other throughout the song.  I’ll say this…Matt holds his own against some very tough competition, which thankfully isn’t competition at all – Diana’s on his team for this tune and that’s important to remember.  Together they float their vocals dreamily throughout the inviting sounds of “Flat Packing Anger Management” and the contrast that exists between their individual tones for the most part really works in their favor.  For the most part.  With the absolutely incredibly vibrant and lively sound to Diana’s voice – it’s tough for Tiller not to come out a bit lethargic by comparison at times…again, for the better part of the tune I think that the difference in energy and approach works well but there are a few moments where you want Matt to bring up his own enthusiasm and spark behind his voice to match the energy a bit more like Vickers has.  To be fair to Matt…let’s not forget he’s introducing us to this incredible talent through this new tune…and through what he’s written on “Flat Packing Anger Management,” she absolutely shines.

There’s a blissfully unique and beautiful sound they’ve found together overall on this tune.  Reminds me of bands like The Submarines, Casiotone For The Painfully Alone…maybe even The Martinis a bit.  It’s impressive just how much melody this tiny-tune explores and how rich & full this idea becomes…”Flat Packing Anger Management” is both sweet & fun to listen to at the same time.  Through the captivating way that the song builds through the music from verse to chorus – you really get the full-scale of the imaginative and innovative way this collaboration comes together.

Quite honestly, Tiller’s written a charming tune here.  Documenting the struggle of assembling furniture and alternating perspectives and roles throughout the narrative – lyrically this tune is aces and quite different than most of what’s out there in a very innocent, earnest and humble approach.  Can’t ask for more in the production or the smooth way the song gently swings & evolves in the writing and structure…the performances from both bring their own individual personality and character to the sound, tone & atmosphere…it all sounds really well thought-out at the end of the day.  “Flat Packing Anger Management” sounds a lot more playful & inviting than the potential hostility of the title suggests…and if you’re looking for a laidback melody that truly beckons you to listen & contains the real magic of a collaboration that works – well you’ve got one here with Matt Tiller’s “Flat Packing Anger Management” featuring Diana Vickers!

Find out more about Matt Tiller at his official page:  http://www.matttiller.com/