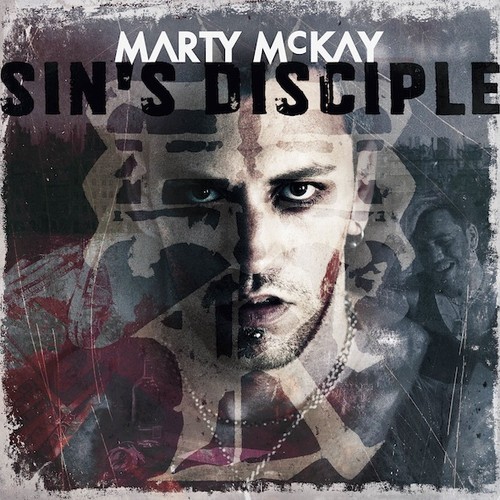 This was an extremely interesting album to put into our reviews. Marty McKay comes to us all the way from ZURICH, Switzerland (Holy are we GLOBAL or WHAT these days?) with a name ready for the radio and the songs to match. Everything you’ll have on Sins Disciple is extremely well put together, tightly produced and performed with incredible skill.

Europe and the surrounding countries have always fascinated me personally. I find it interesting which parts of the world the “North-American” musical influence has fanned out into, but more so, exactly WHICH pieces resonated and stuck with these other locations. For instance, you can still find hair-metal running rampantly in Germany and Russia, the electro-wave that still consumes much of France, or here in the case of Marty McKay he found himself attached to the rap-rock era…maybe throw a little Evanescence/early millennium power-rock in there as well to round him out in this description…

But it’s interesting in the sense that Europe, at least from my Canadian perspective…can often be found either two steps forward, or two steps behind what’s happening here, rarely joining us in what’s happening currently in the present musical climate. In the case of Marty McKay, this rap/rock is a style of music that we’ve long explored throughout the past two decades, but also one that never truly wears out and still has incredibly passionate fans.

McKay makes music for parties and good times. His rap/rock combo mainly combines an old-school rap vibe against the power-rock of the early 2000’s. When we’re talking about “old-school” rap – I’ve got some knowledge here. As some of you already know, the first concert I ever went to was DJ Jazzy Jeff & The Fresh Prince – and you can hear a lot of that classic-style rap-flow throughout much of Marty’s work. Interestingly enough, if you check out his page at Soundcloud (Which includes clips from this album) you’ll find an interview clip from Swiss Radio towards the bottom…

Now…I’m not going to pretend I understood much, as I’m limited to English myself, BUT…I did actually listen to it. There’s a music within the language we even speak daily…sometimes it’s just nice to hear the tone of a person’s natural voice you know?

Again – BUT… If there’s one thing I COULD understand without a doubt, it’s that they made endless comparisons between Marty McKay and Vanilla Ice. So, to all our readers and friends in North America who are certainly familiar with the Ice-man, I know this makes you think TWO things:

Alright, Vanilla Ice or anything that remotely sounds like that was from our late 80’s to early 90’s period in our musical timeline.

Every SINGLE time “Ice Ice Baby” comes on you STILL nod your head, shake your rump or jump to the dance floor. At the VERY least you crack a smile.

So let’s be clear here – no one gets to make fun of Marty for being compared to Vanilla Ice – you all loved that guy. Unless Marty starts re-building homes on a reality show…then I say have at him!

Like it or not, it’s a great comparison; and again with the accompanying update on the musical-side & guest-star side of things, there’s plenty of an update on that old-school sound for Sin’s Disciple to not sound like it has been done, or is simply redundant. Songs like “Can’t Get Enough,” “Turn Up My Sex,” and “Sin” make the most out of exciting, dynamic music and beats as McKay delivers over and over and over again. What’s even more cool, is that with a little digging you’ll find out that this particular rapper uses absolutely no samples. Everything you’ll hear was made with real instruments, which has been pulled off so well you might actually think they WERE samples! But the decision to go this route musically wouldn’t be the only challenge McKay would have to conquer to take his music to the world…

You gotta imagine first of all, that English is not his first language here. He’s done a fantastic job of taking the lyrics and words to a place where it all feels natural for him. I honestly think there are only a few spots that gave any hint of an accent whatsoever – I might not have even picked up on it had I not been aware of McKay’s geographical situation. His delivery in the old-school rap style is flawless and on-beat, none of it sounds awkward or misplaced. His tone is great and the enthusiasm & genuine love for the music comes through cleanly over the mic; what else can you ask for?

It seems like he’s content to continue the work as well. Beyond this new album, Sin’s Disciple, he’s got something incredible brewing in something called Project 7, which sounds like quite a departure from what you’ll hear on the album. At the moment you can find some instrumental songs on the Soundcloud page…I know I’m here to review Sin’s Disciple, but I wouldn’t be doing my job if I didn’t turn over every stone…

And boy am I glad I did. Check out the track “Lust II” and tell me that the band Zero 7 doesn’t sit at home wishing they wrote this track themselves. Love this tune. You’ll also find the single version for “Emptiness Returns,” which is another powerful tune with an excellent guest-star; a well-written song that certainly highlights the skills of these two contrasting vocalists and their ability to work together.

So….yeah….Sin’s Disciple….what can I say other than a time & place for music like this ALWAYS exists. Listen to a track like “I Want Your Life,” and tell me you couldn’t find a moment in your OWN life where this would be the perfect track to become the soundtrack for it. I suppose in a lot of ways that’s what I hear in this album…that ability for everyone to relate to it, WANT to hear it, smile and have a good time.

Accessibility; I don’t know TOO much about music, lol, but isn’t that kinda like, how we’re all kinda hoping our music would be received upon sharing it with others?

Check him out further through his official site at: http://www.martymckay.com/