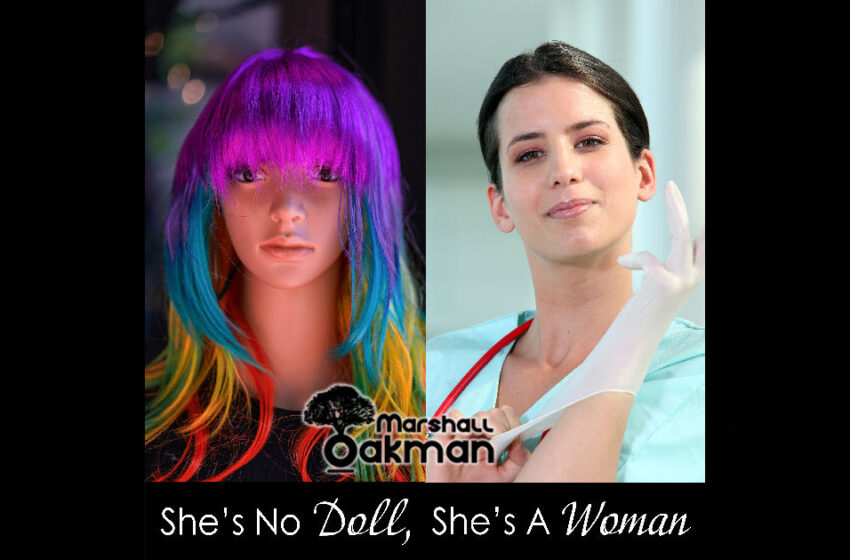 Alrighty Marshall…I remember how things went the last time around and how you were able to get me onboard through the execution and musicianship of the single I was reviewing, called “At The Boiling Point” from back in 2021 – that’s all still fresh in my mind.  I’m like an elephant that way – I never forget.

So…ultimately, it’s no surprise to me that I felt like this new single, “She’s No Doll, She’s A Woman” came out sounding great…I have the feeling that is probably always the case when it comes to Oakman’s music – the dude is a solid musician, through and through.  The main melody of his keyboards carries this tune strongly…the vocals probably could have come up a notch or two in volume, but overall, I ain’t complaining – he sounds great singing this song as well.  It’s catchy, it’s quaint, it’s sweet, it’s inviting and endearing without a doubt…it’s got a LOT of great things going for it.  With respect to how it all sounds, “She’s No Doll, She’s A Woman” essentially comes out flawless…I can’t really hear anything that I’d think of changing & I felt like the main hooks were strong enough to warrant its single-worthy status.

The way we present our material of course, can be a major factor.  In times where society is in-flux, you can end up taking massive chances without even realizing it, especially when your intentions are good.  So I’m not gonna go as far as to claim ‘video killed the radio star’ here – but to some, that could be the case when considering the video for “She’s No Doll, She’s A Woman,” even though I believe it’s made with the best of intentions.  Visually, don’t get me wrong – Ethan Felizzari has done a great job and it’s crystal clear and captures great moments onscreen, like Marshall’s irresistible smile as it all begins.  Stuff like that, is perfect…I dig the shots of the band playing overall as well…all that ends up being a positive.  Where I think Marshall could run into a bit of trouble, is whether or not there will be a few people that think he’s speaking somewhat out of turn here, or standing up for women in a situation where they’re obviously capable of doing that just fine on their own.  It’s kind of a case of the help nobody asked for, yet is being supplied…make sense?  I measure by intentions, always – so to me, I get that Marshall’s new video is clearly supportive of women…but it’s harder to say whether or not everyone will take it that way.  Ultimately, it looks like the video is trying to show there’s so much more to women than just what happens inside the home – which again, is true – but that’s hard to communicate without diminishing just how much that IS important happens on the inside of the home too.  We’re living in the day & age where it’s hard to be complementary without offending someone else in the process – and in my opinion, a video like “She’s No Doll, She’s A Woman” probably walks a finer line than Marshall, Ethan, or even myself could understand from our male perspectives.  Like…I’ll give you an example – is it a man’s place to be the one to introduce the incredible Gloria Steinem to a woman in a music video?  Should we be assuming that a traditional housewife has no exposure to female literary giants or powerful women of influence?  I ain’t here to judge Marshall on all that…but I will acknowledge it’s riskier than he thinks.

So…again…measure intentions folks.  Oakman means well, and all-in-all, if you’re reading between the lines of the song & the video, you’ll see & hear he’s paying homage to some extraordinarily important people on this planet we share, and that he’s doing that sincerely.  I think that, in this confused time where we’re all trying to figure out how to support each other without overstepping our bounds, we’re all going to stumble a little along the way…which is why we’ve gotta look at things from a wider lens and understand what those intentions really are, as opposed to making a snap judgment or being offended by something we see or hear.  Marshall’s clearly a good dude with a big heart from what I can tell.  Does he need to be the spokesman for women?  Probably not!  But that doesn’t make his contribution any kind of insignificant or invalid…he’s ultimately doing more than most men ever do by simply making this video & single.  There’s a chance that Oakman’s latest is going to connect more in its audible form than visual this time around…but even that’s okay – we all learn, we all evolve, and we all do better with the next opportunity we get as a result.  At the end of the day, he’s aiming for an anthem of empowerment with “She’s No Doll, She’s A Woman” – and of course, my only hope would be that that’s how it’s taken – it’s really hard to say how this will go over in the court of public opinion in this modern era we’re livin’ in – but I think Marshall’s clearly good intentions will carry him through & have people singing along as they should be.  Not everything has to be so freakin’ serious all the time y’all…it all sounds good to me…so lighten-up, take it the way it’s intended, and turn this up where the volume belongs.

Find out more about Marshall Oakman at his official page at Facebook right here:  https://www.facebook.com/marshalloakmanmusic