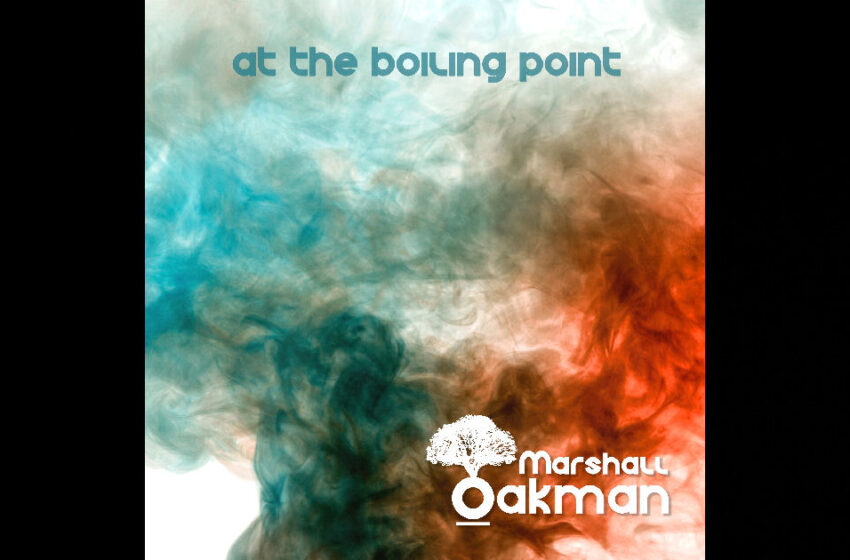 Willing to give this a pass given how extremely well-played it is.  Maybe a high-five even.

At the heart of it all, “At The Boiling Point” is pretty bulletproof when it comes to the execution here, with artist Marshall Oakman and a crew of studio aces that were basically born to riff on Blues/Rock tunes like this.  While I don’t know how much it would have necessarily challenged them all, there’s also no doubt that they’ve gotten the absolute most out of a sound that’s tried, tested, and true; maybe it’s the addition of having the Rock-piano in the groove here that’ll set it just enough apart from the rest.

Because I’ll admit, like so many of you out there, I listen to a track like “At The Boiling Point” and my first conclusion is actually the recognition about how much fun is being broadcast through the ol’ speakers here.  You listen to a cut like “At The Boiling Point” and you can’t help but hear that these guys have essentially played this song like their very lives depend on the results…can’t really help but to admire that too.  Doesn’t matter to me if you’re playing something you’ve played a hundred times or once before, as long as I can hear the audible passion in an undeniable way, you’re bound to land on fairly safe ground with me over here for the most part.  Is there more room to be daring in the music itself?  Sure, I’ll concede that.  The concerns of course come through the fact that we’d all be listening to a song with many aspects of sound that we’re more than familiar with & comfortable hearing that explore the sensational side of piano-based Blues/Rock…but at the end of the day, it really doesn’t make all that much of an impact on us once we’ve pushed play now does it?  Once you’ve pushed that button on your players & stereos, you end up on Marshall’s turf from there – and he’s just not gonna let you escape this single “At The Boiling Point” without putting a smile on your face & at least a lil’ more pep in your step.

Depending on how he means it, “something tells me you’ve heard this before” might be very well one of the most clever lines added into a song that borrows so much from what we know & love from music’s history.  Is it a tongue-in-cheek reference to that fact?  It could be.  I certainly wouldn’t put it past a track like this with such a vibrantly playful vibe to have a little fun with US along the way as well.  While it’s ultimately a bit tough to assess what “At The Boiling Point” may or may-not be about specifically, I’d be willing to bet it’s somewhat of a metaphorical reference to that feeling of having had enough with simply sittin’ around stewin’ in your thoughts, and needing to find that creative outlet – or any outlet of some kind – to get some of these emotions out before ya implode or explode, whichever might suit ya most.  Chances are there are many of you that can relate much more than you think, if my theory is at all correct here.  Think of all the creative people out there that know they’ve got the talent & the skills to make their dreams turn into reality…and think of how often we’re willing to let self-doubt & caution & LIFE get in the way of doing exactly that, while you’re “stuck on the runway inside of your head” waiting for that cue to take off.  If you’ve seen this as many times as I have at this stage of my experience, believe me, it’ll make you reach the boiling point in a whole different way, no problemo; but I suspect this isn’t so much about the macro outside perspective so much as it’s an internalized one that has been bottling-up under the pressures of self-scrutiny and time marching on…though it could be both.  “At The Boiling Point” – you just gotta decide to make it happen, break out of whatever it is that’s holding you back, and freakin’ GO FOR IT before the clock runs out on ya, you dig?  The beautiful thing is, that once you reach this all-or-nothing point in your life (and you’ll know when you do, trust me on that), all bets are off, the pressure kinda is too in an odd way, and chances are, you’ll surge right into the best years of your life doing what you actually love to do – just like our good friend Marshall here.  There’s not too much else to go on other than our ears & theories – it looks as if “At The Boiling Point” is perhaps part of something more if you look at some sites online, looks like it’s a single at others…and there’s a few other confusing details as well out there that actually still point to my theory on this cut being correct.  There are references made in the bio online that mention something about a song called “Nothing’s Holding Me Back” that I couldn’t track down with the help of good ol’ all-powerful Google or find at his pages, and a record called 24/Seven that…well I guess that’s coming soon too, I’m really not all that sure – but you can visibly see without even hearing these things that on a thematic level, these concepts all potentially relate in multiple ways.  From what I can see & what I can hear, Marshall’s clearly been “At The Boiling Point” for some time now, and he’s lettin’ off some musical steam with a team full of ace musicians to play along with him, with plans for even more to come I’d assume…and hey, right on to that.  You creative-types out there know that feeling far too well…that if you don’t somehow get the music outta you and into the world…I mean, who knows right?  But you do wanna avoid that explodin’ or implodin’ of course…neither are recommended for your health…and if music is the answer for ya, take it; you’ll never find a healthier option for your mind, body, and soul.  Marshall’s proof of that – LISTEN to the inspired way he plays “At The Boiling Point” with his crew of talents alongside him – this is the sound of a man that no longer wants to hold anything back & go for it, livin’ life as it should be lived, doin’ what he loves and was clearly born to do.  You couldn’t listen to “At The Boiling Point” and come to any other conclusion really…the flawlessly spirited sound of this whole song exemplifies that feeling of when push comes to shove – for yourself, as an individual – and when you break through that barrier, you come out shining bright on the other side and sounding like you truly belong where you end up – just like our good friend Oakman here.  Dude’s got real spirited sound & purpose driving him forward right now…I’m confident any set of ears could hear it – and I’d assume most will love this single for that very reason to start.  The more you dig into it, the more you’ll find Marshall Oakman really has to offer as a writer & what he’s looking to communicate…and I’d bet on the man having some of his best years coming up right around the corner when it comes to making his music & breaking ground as an artist.

Find out more about Marshall Oakman at his official page at Facebook here:  https://www.facebook.com/marshalloakmanmusic