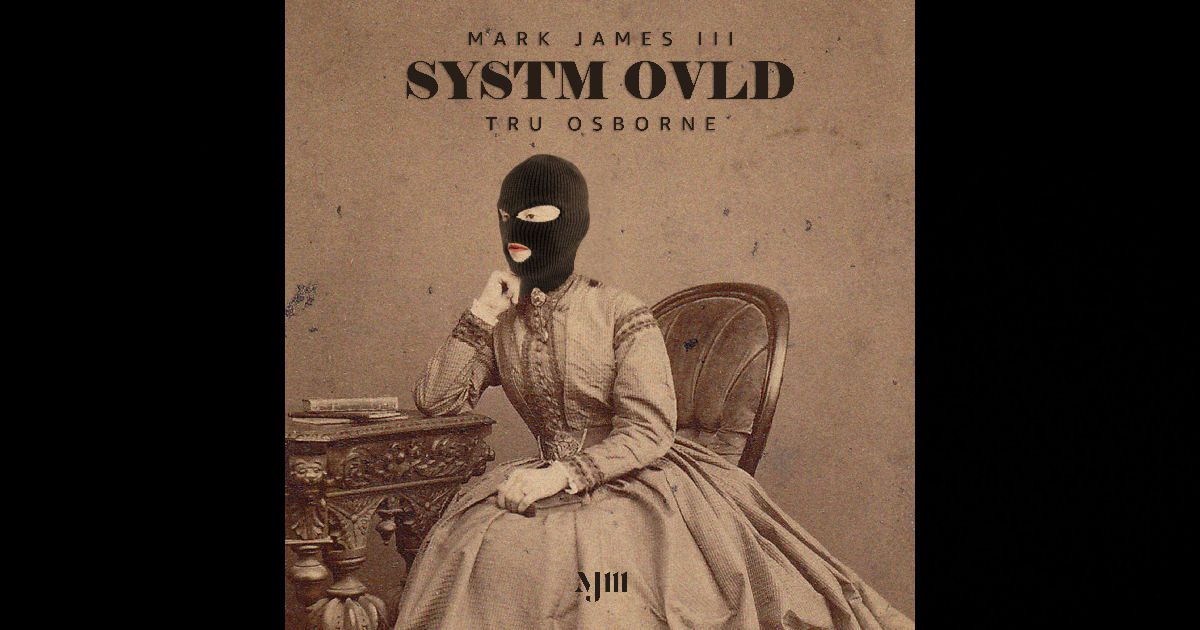 Yessssssssssir – this hits the mark.

I’ll fully admit, even though I’m not 100% sure on who all is doing exactly what, I know what I like – and I like this, a lot.  Highly chilled-out & exceptional stuff happening here in the music of Mark James III…if I’m being entirely honest, it’s actually hard to picture anyone out there not being down with his brand-new single “Systm Ovld” featuring Tru Osborne – not only is it spectacular to listen to, it’s relatable too.

What I love, is that I pretty much didn’t expect anything I ended up finding from the lefts to the rights of my speakers here in the studio when it came to this single.  I’m not quite sure what I was assuming I’d find based on the cover art alone to begin with – but then you add in a title like “Systm Ovld” and I suppose I thought I was about to be in for some crazy electro-jam raging out of control within seconds of pushing play.  To say I was pleasantly surprised by what I ended up hearing from Mark James III & Tru Osborne would be a MASSIVE understatement – I’m completely feelin’ this cut they’ve created here.

And when I say relatable, what I mean is…well…I mean, it could be a couple things really.  VIBES are relatable when they’re done right like this; you hear them & it’s like you’ve known them all along somehow…not something that you’ve ever heard before, but something you instantly connect to, quite often without any real explanation at all.  It’s music that just feels like it’s a part of you – that’s the magic of the smooth groove that “Systm Ovld” powerfully locks right into the moment it snaps into the beat around the twenty-second mark, just past the curiously enticing sounds of the way this single opens up.  You get that head nod goin’ on…those toes tappin’ with the beat…you drift right off into the immaculately chill atmosphere Mark James III has created and vocals from Osborne that reveal he’s clearly feelin’ the music every bit as much as we are!  The textures of the music itself are awesome – for a track under three-minutes in length, MJIII combines brilliant layers of subtle sound throughout the song’s progression, slowly adding pieces to the mix & subtracting along the way, retaining a boldly minimal set of ingredients at any one time, while still finding insightful ways to raise the stakes as the song plays on with each clever addition & transition.  Lyrically, you’ll find more relatable tie-ins…or at the very least, I’d hope you would…it’s about the “Systm” that we’re all in – aka, the daily grind – and how right now, we’re all feeling that “Ovld” when we’re just trying to get through that 9-5, you dig?  I’m sure many of you out there listening can relate to that…but take it from this collaboration and the highly adventurous & artistic design it has…it’s through our art & what we create that we can escape the grind.

Perhaps the most remarkable thing is the amount of professional restraint at work here, right when you wouldn’t expect it or see it coming.  Like I said at the beginning, you’d be likely to assume that “Systm Ovld” would be jammed with sound, but it’s all laid-out as pro as pro gets & it’s enticing to listen to at all times.  Diverse in how it all moves, Mark James III keeps the cut slick & sliding through hypnotic & chill vibes, but never to the point where anything is crammed or too full – so as far as the “Ovld” is concerned, it’s through the concept y’all – MJIII knows just how to play this when it comes to the groove, keeping it entertaining at all times through subtle switches that show a dedication to the art of sound.  He’s got sounds you’ll feel within ya, he’s got thought-provoking transitions that’ll catch your attention for all the right reasons with deep switches in the vibe, but somehow…SOMEHOW…everything remains entirely smooth at all times and flows as fluid as water y’all.  The vocals certainly help bring this cut to a full audio-victory with the soulful melody and rhythm, charisma & charm that’s being broadcast over the m-i-c.  Osborne’s got that classic, timeless sound, a fearlessly expressive approach, and just like his counterpart in collaboration here, he gives you just the right dose of everything you need, leaving you wanting for absolutely nothing more, because everyone here has maxed out the potential of this tune by giving it the best they can.  The results speak for themselves dear readers, dear friends – just listen to the relentlessly smooth groove and unified sound of this collaboration…it’s right on the money; full of single-worthy sound and continuously entertaining as it is comforting, welcoming, & relaxing to listen to, while still making time to make relevant social commentary if you’re listening closely to the words.  “Systm Ovld” will creep up on ya in stages like that…you might notice the music at first, the vocals, the lyrics…maybe it’s the audible cherry on top of those awesome guitar notes coming through at the very end of your first spin…the point is, there’s more than enough for your ears to grab onto to warrant a second & third spin, so on & so on.  And the more you listen, the more you get out of it.  Bottom line is, Mark James III & Tru Osborne have done EVERYTHING right to keep ya listening, so believe me when I say, eventually you’ll hear absolutely all that’s being laid down on “Systm Ovld” and what’s being put into it by all hands on deck, because this is a jam you’ll definitely continue to keep spinnin.’  One way or another, you’ll absorb it all…it’d be impossible not to if you’re listening – a song like “Systm Ovld” speaks right to the soul and retains its shimmer & shine on repeat, no doubt about it.