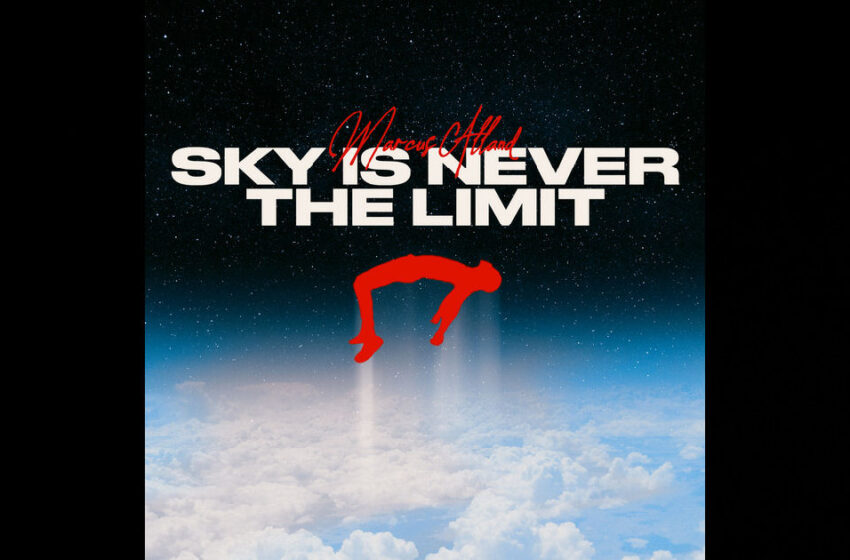 Dig this guy’s mindset, motivations, and determination – Marcus Alland definitely flexes professional finesse on the mic, and the positive thread you’ll find tying together his single “Sky Is Never The Limit” wraps this new single up tight at every corner with relentlessly inspired vibes.  Alland is here to “get up & get it” – and the best recommendation I got for the rest of y’all is to get outta the man’s way & give him the room to do what he does…because one way or the other, he’s heading to number one with his music.  “I’m not finished, far from it, hell nah – been a long time coming” – you might say that Marcus is still just gettin’ warmed up y’all…the goals & plans this dude’s got for the future…I mean, you can hear in this one single alone that he’s never gonna be willing to settle for mere satisfaction – he wants it ALL.

And so he should!  The “Sky Is Never The Limit” – never have truer words been spit or spoken – the only limitations we’ve got are the ones we put on ourselves homies, promise you that.  Marcus gets it.  You give this cut right here a spin and you’ll quickly discover this dude’s got serious hunger for the mic, wild talent & the verbal X-factor that stands out, and the real mindset it takes to go the distance.  You think like an artist like Alland does, and trust me, you’re well on your way to a bulletproof legacy that’s built on hard work, effort, and material you’ll be able to stand proudly behind for the rest of time.  It’s all about putting everything you’ve got into everything you do – if you take a page outta Marcus’ playbook, believe me, you’d be doin’ yourself a service…this guy’s got his head on straight & he’s as focused as it gets.  Talent is one thing, and it’ll take you pretty far in this lifetime…but let’s be real – it also gets passed over all too much as well, in favor of some overnight viral sensation that’ll come & go quicker than you can even blink in reality.  You combine genuine talent, an undeniably positive mindset, and the drive & determination to be the best in what you do though?  There ain’t no stoppin’ artists like Marcus.

“Remember the reason you started, remember why you never gave up…” – I could quote from this man all damn day y’all – “Sky Is Never The Limit” is loaded up with REAL TALK that should put YOU into ACTION – you feel me?  I might just by playing this cut as my own personal anthem every single morning before I do ANYTHING…listening to the inspired way that Alland is goin’ after it on this cut leads directly to an empowering vibe that should translate straight to any of you listening out there, and encourage you to get out there & give it 100% in anything it is you do.  Tracks like this prove that Marcus don’t just talk about it – he IS about it – and it’s in making a single like this that you know he leads by example.  From the focus he displays, to the verifiable talent he puts into a microphone in bold, confident ways that no one could possibly miss – Alland sounds large & in-charge for a REASON y’all – it’s because he IS.

From the stylistic knowledge bombs being dropped from start to finish, to the swagger & slick design to the music you’ll hear – Marcus has latched onto a solid hybrid style that acts as the bridge between Trap and conscious Hip-Hop perfectly – I genuinely believe he’s got a cut here that’ll amp people up in all the right ways and point out the path to success in the process.  Alland’s lyrics are as great as lyrics get here – that’s not opinion, that’s facts – “Sky Is Never The Limit” is stockpiled with wisdom that people should not only be hearing, but they should be carrying a notepad to make sure they retain all the details of Marcus’ blueprint in-full.  There are some really great tracks out there in this world – I don’t need to tell y’all that, you know it’s true – but there’s a massive difference between another really good song and a defining moment in time like “Sky Is Never The Limit” is.  This is a statement cut in Alland’s growing catalog on every level…it’s an audible line in the sand drawn that proudly highlights how he’s ready to make moves that count, and make this music thang he’s doin’ last a lifetime.  With the talent he’s got…and the insightful perspective he’s rockin’ with it…I mean – he’s RIGHT – the “Sky Is Never The Limit” for the potential in an artist like this.  Marcus Alland has put together a flawless single by every conceivable definition – he should be incredibly proud of what’s come out in the results here; not only does this song speak volumes on behalf of his own inspiration, he fully proves he’s capable of passing on that uplifting vibe straight to all us listening.  I listen to a track like this, and I feel like I’ve got the juice to go out and tackle whatever the hell is in front of me – and I guarantee you’ll feel the same.

Listen to more music by Marcus Alland at his official page at Spotify here:  https://open.spotify.com/artist/1y97s09F3TQr7LZ0AvOv5K