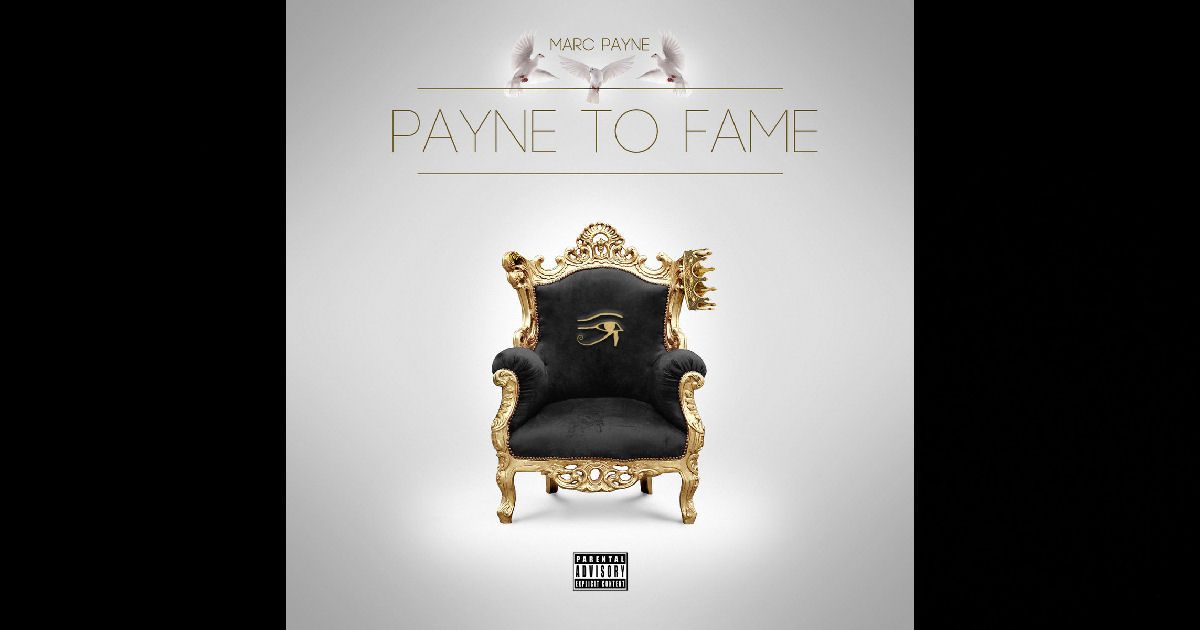 I haven’t quite been able to put my finger on it until now, but it definitely feels like independent Rap struggled harder this year than it has in the previous five or so before it that I’ve been reviewing here.  We’ve seen & heard a few veterans return to the scene that have made impressive records this year, a few newcomers that have made a bit of an impact with their latest joint…but there’s been something missing more from this year than any other I can recall.  In an effort to correct this – Marc Payne is here to deliver what it was all along – genuine swagger, genuine style, charisma, and character – FINESSE on the mic that makes the difference…this dude drops hot bars with a flow so smooth you’ll come out completely convinced that rappin’ was exactly what this wild entertainer & emcee was truly born to do.

Low-end heavy, Marc Payne could write the book on what it takes to generate interest in the first ten seconds of a cut.  What I don’t know is whether or not that’s a fully savage remix of the original sample from Salt’n’Pepa worked over so hard you’d barely recognize it, or if that’s an all-new take on it mixed for this particular track – either way, I doubt it matters when it comes to how we hear it – that’s immediately enticing and a huge hook that’ll show up a couple times as “Push The Button” plays on.  As impressive as the mix, the beat, and the sample-hook might be – you can’t take your ears off the main star of this track; other emcees have made great tunes this year – but this is the performance you’re looking for when it comes to personality on the m-i-c.  Marc Payne puts in such a slick & skilled turn on the vocals it’s impossible not to notice – that’s the kind of character that seriously connects to anyone listening.  The kind of song where, whether you’re a fan of Rap, Trap, Hip-Hop, or NONE of those at all – you gotta stand back, listen to what’s happening here, and admire the art of the emcee in full-effect.

Everything is done exceptionally well on this cut from the back to the front, lefts to the rights.  Listen to the detail & emphasis that the backing vocals supply to this track…whether it’s a whispered echo or just some random wild’n’out – Marc has made each layer complement the idea & flow perfectly.  Structurally, he’s also seriously set this single up for success – you’ll find that moment after moment sees this emcee continually try to outdo what JUST happened only seconds before – and you gotta dig that!  Best way I can put it, is to like…jeeeeeeez just recognize the craft involved people, straight-up, full-stop.  Marc will start this out with giant hooks in the music and familiar sound of the altered sample opening, he’ll shift into his first gear and present that loose & live-wire style he’s got as an emcee – and then LISTEN to how he takes it to the next level around the fifty-second mark, adding a layer of style & smoothness to his flow that is BEYOND REAL y’all.  No doubt that Marc is feeling this track – you can hear it in every move he makes and there are still plenty of fireworks to come as “Push The Button” plays on.  Like, we’re talking a brilliantly EPIC dose of humor that’s SO SLY and dry that it’ll fly right by most who are listening on those first couple listens…but check out the call & answer method applied to the ninety-second mark and how fucking rad that is.  I mean…if that moment doesn’t say it all about the overall themes and subject matter of “Push The Button,” I just don’t know what does.  So that’s another smart move right there from this emcee, who will arguably STILL go on from there to deliver his most impressive bars and tight rhythmic flow afterwards!  Like right from around 1:45, Marc just starts taking the rest of this track for a serious ride, setting the sonic example for other emcees to follow when it comes to what it takes to add authentic character & charisma to the tone & flow of the lyrics.  Marc is gritty, intense, precise, and so wickedly loose with his vibe that the way he combines his rhythm & energy in his performance all sounds like the perfect fit from bar-to-bar.  Dude deserves some real props for the commitment & confidence he’s putting forward on the mic here – Marc Payne can certainly deliver rhymes in relevant ways that are designed to catch just about everyone from all-sides of Rap & all its million sub-genres.  Crossover appeal and potential like that exists strongly where an artist truly puts everything they got into the music they make; Marc’s held nothing back here and his consistently vibrant flow & irresistibly smooth & slick tone of voice reveal an emcee who’s seriously got the fire inside him right now…you can hear this guy is inspired & ready to take it to that next-level.  I supremely dig this – I’ll definitely remember Payne from such a signature style & sound to his flow – he’s well on his way to establishing his identity on the mic if this is how he’s goin’ bout it all – dude crushes this cut.

“Push The Button” comes from his new record Payne To Fame – make sure to find out more about Marc Payne at his Instagram page at:  https://www.instagram.com/paidpayne