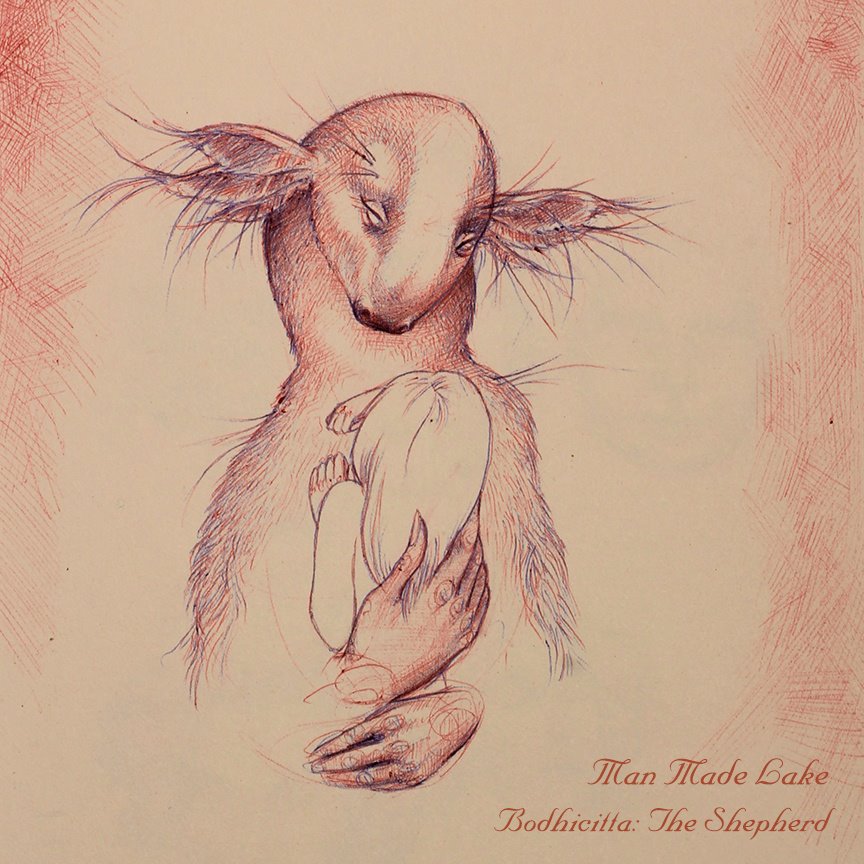 Have you ever been taken in by fantastic personalities that just make you want to support them? Take me for example, arguably one of the world’s biggest Batman fans, yet somehow I’m beyond stoked to see what Ben Affleck will do with it – just cause he’s always seemed like a pretty kick-ass dude.

And having both met and interviewed Man Made Lake in person and through video on our show SBS Live This Week – when “Lemon Cake” started to play on my car stereo…I knew at first instant I was going to fall in love with the most recent addition to the MML catalog. I’ve absolutely supported the music of this band from the moment I first heard it – so I had to carefully examine this album…multiple, multiple listens through to make SURE that everything I was hearing, “Lemon Cake” and the album beyond…was REALLY as good as the first impression truly was.

Because I’m beyond sure; this is the best thing to have come out from Man Made Lake so far in their catalog – Bodhicitta: The Shepherd is an album full of diversity and musical-innovation, twisting and turning at every chance and pushing the boundaries of every genre they take on. Thoroughly entertaining – I’ve had this album in my rotation for nearly a month and a half and there’s no foreseeable end to that in sight, or sound…turn it UP!

“Lemon Cake,” is just about as perfect of a start to an album as you can ask for. Armed with universal appeal – I knew instantly that a track like this doesn’t just resonate with a bearded face like mine, but even with the “I-wear-sandals-even-in-the-snow-and-really-ONLY-listen-to-music-being-played-BY-people-in-sandals” crowd like my wife. On the pop-rock side of life for the Man Made Lake catalog – they’ve absolutely got themselves a huge hit on this album in track one – go stick it in your ear!

Going right into an extremely interesting track called “Window Pane,” on album that has 10 songs and coincidentally, 10 of my new favorite Man Made Lake songs – this one stood out to me for a completely different reason. What I know of this band…they’re quite “worldly,” in fact moving the entire contents of their band to China at one point…so to think that this particular track in question is a dead-ringer for the sound captured by another of my own favorite bands from clean-across the world and found in Australia…maybe shouldn’t be as much of a blissful surprise as it was. But for those that know of the band Eskimo Joe…Man Made Lake have somehow found themselves in a similarly awesome groove here on this second track all the way over here on Vancouver Island, BC, Canada.

And that feel, and sound…particularly of the Black Fingernails, Red Wine-era of Eskimo Joe…can be found in continuation on this album. Largely due to absolutely brilliant “background” layers in the music provided through subtle guitar parts and some truly immaculate writing in the keyboards. Listen to them!!! You might not even notice them in a lot of cases – but believe me when I say they’ll find a way into your brain to stick in your craw for life. There are so many hooks contained within each single track on Bodhicitta: The Shepherd, that it’s almost like the musical equivalent of landing on a barb-wire fence. Perhaps a lot more comfortable of a feeling…but you can’t shake this album loose once you’re into it.

It bounces between low-pulsing atmospherically-based tracks like “A.S.M.R.” and the playful “Zebra Tapes” to round out the beginning before you’ll find yourself in the midst of an album that doesn’t let up. “Horsefly” is a track you can hear so vividly you can picture what a frantic freak-out this track could become in a live setting.

Much like the opening track, “Fallen Leaves” seems like a hit song. Excellent guitar work & steady drums work perfect with Craveiro’s lyrical rantings, perfect flow and tone. There’s no doubt about it, this track’s a mover – one you could hear can pack a dance-floor. Keyboard solo, chorus-style chants…really – this is a track that has it all and a perfect representation of Man Made Lake at their focused best.

“Water” might very well be the track you “missed” in your first couple of listens, but also one of the largest indicators of the work MML have put in behind the scenes. It’s a track like this that makes you appreciate how they could have gone in many directions musically, but instead chose their own. It leans on Americana…it leans on stadium-anthem….it’s slightly blues-rock….it becomes more than all-rock…

And it’s through this combination of sound that Man Made Lake has truly found their own within.

They crank it back up in “Last Brigade” and “Monet Makes Us Giants” towards the end of the album, along with an extremely haunting version of the opening track “Lemon Cake,” in a fresh take – a haunting acoustic version re-titled to “Nico.”

Well…let’s just say I haven’t heard an alternative-pop-rock song become such a unique and haunting version like this since…..well, since Blind Melon took many of theirs and re-constructed and re-built them on their album, Nico. If the name is any sly reference to that, and not simply my brain’s crazy indexing…makes total sense to me. Man Made Lake’s “Nico” is an absolute chiller. Again…you can almost picture all the house-lights off…spotlight on the guitar and vocals…no other lights can be seen… It’s really an amazing twist on what was already a wicked song to begin with – no matter which version you latch on to, you can’t lose.

That holds true of Bodhicitta: The Shepherd all the way through. Ten tracks recorded, and after a relentlessly thorough listen…a virtual attempt at wearing out the songs…I can definitely say this album has more than held up for me. It’s given me an even greater appreciation for where they’ve come from already, what they’re doing right now – and if you were to ask me, a very good indication of where they’ll be going to next.

I always expect great things from great bands and great people like this…but I also think that’s only fair!

Man Made Lake is a band that has never wasted a second of my valuable ear-time – Bodhicitta: The Shepherd surpassed all my expectations; this is an album that will never wear out.