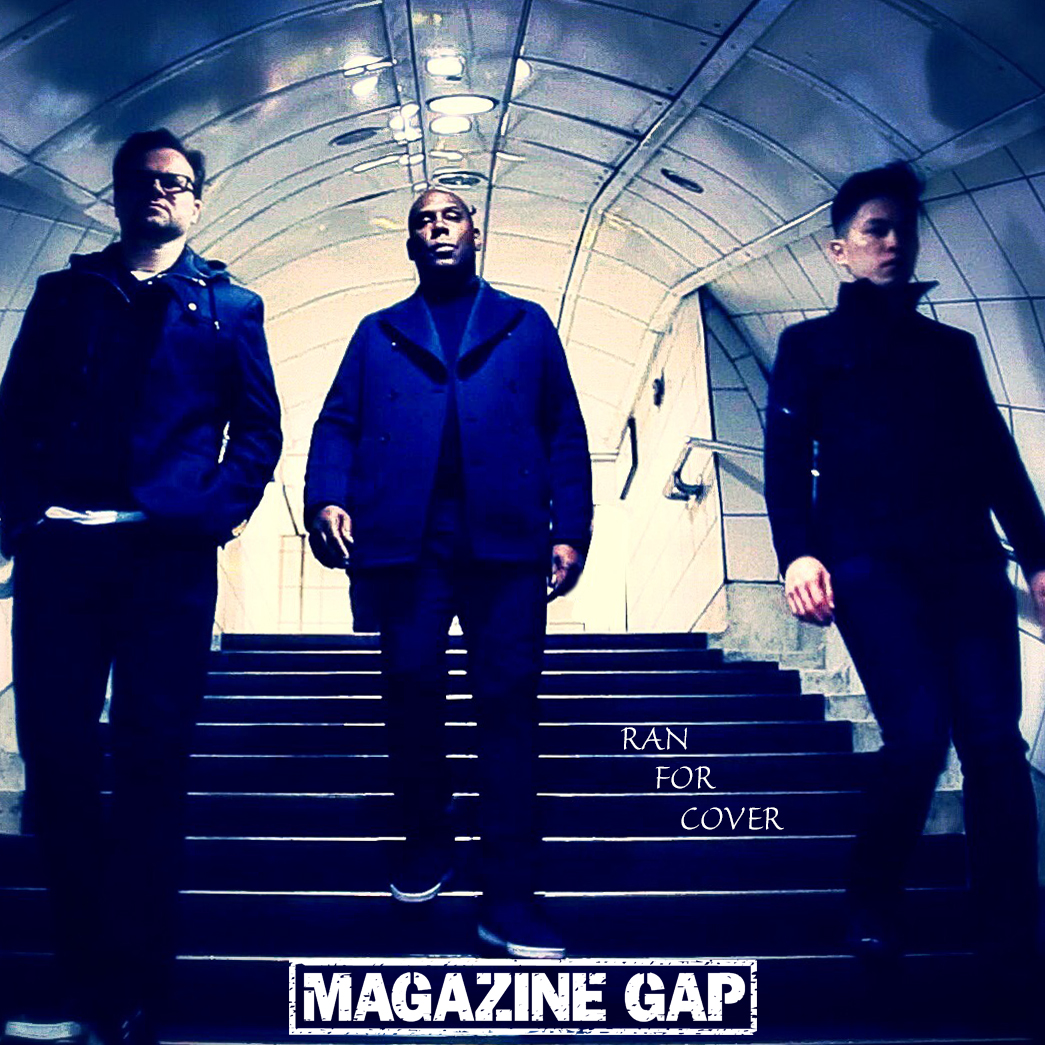 When we first reviewed Magazine Gap and their Calling Card EP at the end of last year, we heard things we liked…and we heard the promise of something even more.  In early January of this year, the London-based Pop/Soul trio returned to our pages with a new single called “In Two Minds” that revealed a sincere new side of the band we’d yet to hear fully-explored in the music of Magazine Gap – a track that also showed the growing unity within the band and the evolution in their sound, style & writing.  Now here we are for a 3rd time with this crew – and they’re clearly a well-oiled machine now.  The new single “Ran For Cover” sounds brilliantly alive and vibrant…and considering the storyline that runs deep through the narrative – it should.

Combined with the shiny & slick new video to illustrate the points in the lyrical imagery – Magazine Gap has certainly got themselves another winner with “Ran For Cover” and once again show just how focused and complete their ideas can be.  Executing on everything with real heart & soul, both the audio & visual concepts contained within their new single really connect and tell a true story.  Written from the perspective of a musician looking back & reflecting personally on his life, choices made, directions taken…many of you out there reading this right now will likely relate to much of what’s being sung & shown onscreen – and if you don’t…well…your time is likely a-comin.’  Because we all have that tendency to look back at our past and examine the route that led us to who we are today whether you’re a musician or not, that’s just a shared thread in our humanity…but rarely is the emotional rollercoaster that comes with it shown in this accurate of a light.  “Ran For Cover” delivers on its own certainly as a song – but truly, when combined with the video, this idea finds its sense of completion.

As much as I really connected to their last single “In Two Minds,” I gotta say – it was a pure pleasure to hear Magazine Gap spring back to life with the more up-tempo light-funk atmosphere they’re working with on this new tune.  “Ran For Cover” almost starts out in a like…more inspired & upbeat version of David Gray kind of sound.  What would that be anyway?  Rob Thomas?  Largely due to the soulful approach and dusty vocal melodies of James Keen, his insightful & observational lyrics draw from an intensely personal place inside him – and he’s more expressive than I can ever recall him being as a result of that clarity of familiarity enveloping him throughout this entire idea.  I think he’s really nailed the verses as tight as can be – and Keen goes on to seriously rise to the occasion when the chorus presents itself in a range of tone, powerful and emotion in a very challenging part to pull off.  Keen’s relationship to this song personally seems to really have brought out the best in him – I’ve honestly never heard him sound so good and I’ve always enjoyed his vocals; but it’s more than that…it’s the fact that you can hear just how much strength, precision, emotion and a steady balance of power would be required to execute the ideas in the writing of the vocal-melody.  And he NAILS it.

As for the other two members…meh, they’re alright too I guess.

JUST KIDDING!  Magazine Gap is showing themselves to be completely worthy of your time on all-fronts in the new single “Ran For Cover.”  Alex’s keyboards are an essential part of this band and contribute to this particular song in fantastic ways from the sound of horns to the way the track is structured and moves along with the impressive snare-snaps & crisp beat kept in-check by Brian on the drums.  The end result that they share together as a band is one impressively observational and sincere melody that has real movement to its evolution and brilliantly vibrant sounds throughout “Ran For Cover.”  The drum fills are subtle but certainly noteworthy…the keyboards don’t even sound like keyboards here (and every keyboardist LOVES hearing that!) and the vocals are wonderfully expressive and possess a wisdom in their tone, character and attitude.  Insight gained over those years spent out on the road…looking for the courage to continue along the path they’ve known they’ve always belonged on…all this plays a role in the sound & expression in “Ran For Cover” – but if their latest singles are any indication…I’d say Magazine Gap has confidently found themselves completely on the right track and moving forward at full speed.  Another excellent tune for a highly-reliable band that is truly locked & focused into their ideas, a band that is realizing & embracing the vast potential of their versatile music and sound – Magazine Gap gets it.

Find out more from the official Magazine Gap homepage at:  http://magazinegap.com/