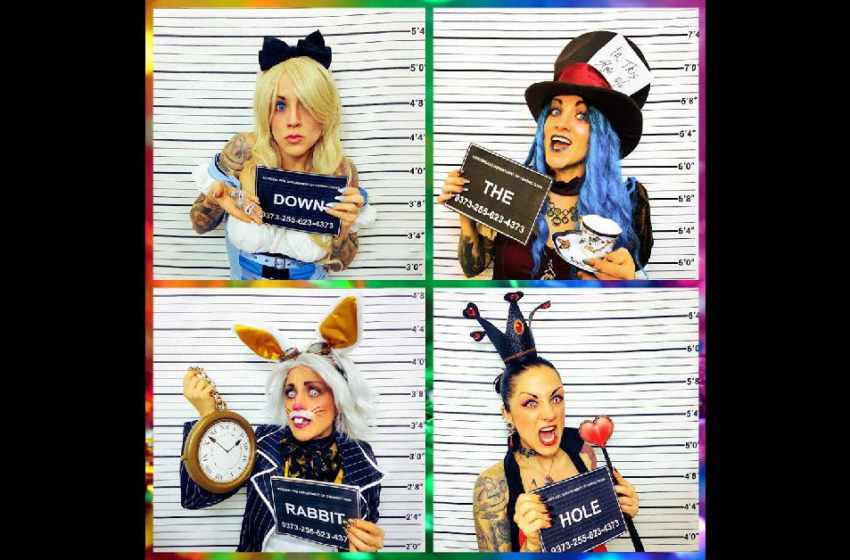 Don’t go expecting me to give it all away here today…but I’m excited about this new record by Madame Z and I’ll be damned if I ain’t gonna leak some details on what’s to come when this album gets released.

Down The Rabbit Hole you say Madame Z?  Don’t mind if I do!  I’ll follow ya down there homie.

If you’re an avid reader of these pages of ours, you already know that’s one of my favorite expressions when it comes to art & music.  If you’re inventive, innovative, and imaginative – if you’re willing to blaze your own trail – believe me, I’ll dive head-first into the rabbit hole alongside ya for the trip, every time.

Alright…so…factual details you need to know…

First & foremost, we’re less than a month away from the official release of Down The Rabbit Hole, which’ll be out there & available for ya as of June 26th this year.  And hellz YES pre-orders are being taken already – go get yourself one right here at this handy link.  You’re welcome.

Now here’s what I’ll tell ya…

As the title implies, Down The Rabbit Hole is no ordinary adventure.  And that’s a damn good thing!  What a wasted title it would be to not go on to discover something unique…and believe me when I say, Madame Z is not about to let anyone down in that department anytime soon with what she’s created on this upcoming record.  If I’m being entirely truthful with you all…she had me at hello – the first song “All The Things I Hate About You” had such a brilliantly enticing & different sound to it that I was immediately hooked.  Moments later by the time I hit “Fall Down,” I was beyond convinced that Madame Z was onto something special with the diversity of sound & style you’ll find on this record.  I was also 100% convinced within a mere few songs on Down The Rabbit Hole that I was indeed listening to an artist with the courage, integrity, and commitment that has a real vision for her music.  Maybe she knows exactly where she wants to take all this…maybe the multiple directions, twists, and turns of this album is an indication that we’ll never pin Madame Z down to any one specific style or genre; maybe she’s keeping the doors of creativity wide open to any possibility & opportunity that may lay ahead.

And I’d say that’s a hell of a good idea…to keep the doors open that is…because there should be plenty of those opportunities coming to knock once people hear this record and the buzz continues to grow.

Like…songs like “Fall Down” & “A Thousand Lives” are gonna blow your mind with stylistically slick melody and the creativity on display.  What you’re not gonna find are typical hooks damn near anywhere – and that’s an incredible thing considering how engaging this whole record truly becomes.  That’s not to say you’re not gonna find ANY hooks – quite the opposite really – these entire songs are the hook dear readers, dear friends – you feeling me?  Listen to a song like “A Thousand Lives” and try to convince me that’s not a spectacularly sensory experience you can FEEL within your soul as it plays!  That’s what I’m talking about.  And then the shift will send you right into the wildness of the album’s centerpiece/title-track?  C’mon people…between tracks five & six on this record alone, Madame Z has already more than covered the price of admission to buy a ticket on this ride…this is killer stuff all-around, and performed with magnificent confidence.  Plus you get a wicked guest-star appearance by Riot Craig on the m-i-c that hits the mark bang-on; “Down The Rabbit Hole” is actually one of the shortest songs on the album, but it’s a cut you’ll find delivers a powerfully memorable highlight.

Each cut is intensely unique…as overused and abused as that word can tend to be, it applies here.  Madame Z could have easily played any record so much safer than this based on the skills & talent you’ll hear from her…that becomes known just about instantly – it’s the fact that she DIDN’T and chose to challenge herself in such compelling, artistic, and exciting ways that have me giving her the gold star.  Songs like “Unwanted” reveal the haunting melodies she’s capable of…tracks like the shifting creativity that flows throughout “Pieces Of Me” highlight the ever-changing directions & multi-layered ideas you’ll discover in this lineup of tunes…tunes like “Secrets” will make an impact through extraordinary subtlety and space in a bluesy-vibe with stunningly soulful vocals and a bloody brilliant guitar solo – you get the idea by now I’m sure…circle the date is what I’m saying…June 26th…you wanna get a copy of this record.

Should I…hmm…should I say it?  Should I tell them all Madame Z?  Should I leak this fantastic detail out there into the world right here & now?  I don’t see anyone around here that can stop me…

You’ll find a seriously rad & badass cover of Alicia Keys’ mega-hit “Fallin’” on this record.  If you’re familiar with the original – and I’d suspect that just like me & everyone else in the world, you ARE – then believe me when I say, you’ll be stoked to hear how Madame Z is able to hang with one of the greatest of the greats when it comes to the vocals…and you’ll dig how she’s changed this cut just enough to suit her own strengths so well.  This will pass the muster of public opinion more than favorably for certain – and when we’re talking about cover-tunes, you know that’s no small achievement; Madame Z will be more than able to withstand the comparisons to the original because she’s done a noteworthy job of her own version that should have listeners excited about what she’s done on her variation of Alicia’s hit.

More bonuses in the mix for ya…you’ll find that “A Thousand Lives” shows up again later in the lineup, this time remixed by Mauro.  You’ll also likely find that, as different as it may be, or as familiar as it may be…more of “A Thousand Lives” is always going to be a welcome thing coming through your speakers.  Or how about when things get gnarly when “Sore” comes on just before the last cut to rip your face off with a scathingly melodic & twisted-metal sound you couldn’t possibly see coming at ya.  Madame Z kinda reminds me a bit of Lennon…not sure how many people out there knew of Lennon when she was out there kicking ass with songs like “Brake Of Your Car,” but there’s a similar fearlessness in these two performers that sounds fantastic & freakin’ gripping when they’re at their most venomous.  “Sore” is packed wall-to-wall with wild sound and an intense mix of soul-meets-metal that’ll go from sly & sleek to roaring & raging at the drop of a dime…no matter how much I could warn ya, you won’t be ready to brace yourselves enough for the most savage moments of “Sore.”  Even after hearing it several times myself, this cut still managed to shock me or scare me to the point of having me being thankful to be wearing my brown pants each time I heard it come up again as I repeated my way through this record.

Fifteen songs for ya on Down The Rabbit Hole – Madame Z has spared no expense when it comes to the level of creativity and the inspired spark you’ll find on this album.  Make sure to stay ready for the official release on June 26th by visiting the official homepage at:  https://www.madamezmusic.com